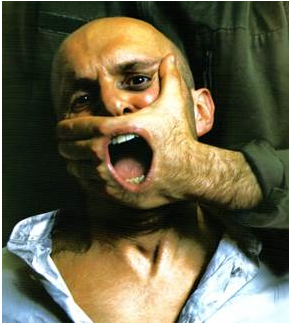 THERE ARE MANY MORE PEOPLE involved in publishing a controversial cartoon than the cartoonist. In any commercial media operation there are many decision-makers and many stakeholders whose opinions and interests must be considered long before the printing presses are switched on. Ultimately, however, the print/don’t print decision belongs to the editor. He or she, alone, must decide whether to censor or publish the controversial material – and that’s not always as straightforward as it sounds.

Let’s start with the commercial considerations. The daily press relies heavily on the willingness of businesses operating in its circulation area to purchase advertising space. Material which might offend the business community should, therefore, be treated with considerable circumspection by editorial staff. An advertisers’ boycott of the newspaper, or even the threat of one, is not something that editors – let alone their publishers! – can afford to treat lightly.

And, an advertisers’ boycott is not the only sort of boycott editors needs to be wary of provoking. Controversial material also runs the risk of arousing so much public opposition that the newspaper’s advertisers are asked to withdraw their support. The customers and clients of local enterprises may threaten to take their business elsewhere if those same enterprises’ commercial relationship with the offending publication is not suspended.

The other potential threat to a newspaper’s commercial health comes from the law. The laws of defamation are particularly harsh in New Zealand, and can be very expensive. There are also a number of legislative hurdles, most of them to do with human rights, which controversial material must clear before it can be published.

But these commercial considerations are only the first line of obstacles with which a conscientious editor must contend. The second line includes the newspaper’s stakeholders. Foremost among these is the publication’s readership.

Without readers advertising becomes pointless and the newspaper’s business model collapses. In considering whether or not to publish controversial material, an editor will, therefore, ask him or herself: “How will the readers react if we publish this?” Followed by: “How will they react if we censor it?” In weighing up the answers to these questions an editor must be careful to keep his or her own opinions and/or morals out of the scales. No matter how distasteful he or she may find the material, it is the readers’ response that counts.

In the case of Al Nisbet’s cartoons in the Marlborough Express and The Press, the editors would have made their decisions to publish on the basis of many years spent working for newspapers in the conservative heartland of New Zealand. Clearly, they came to the view that a decision to censor Mr Nisbet would not have been well-received by their readers – a majority of whom quite likely share and endorse the sentiments depicted in his cartoons. Their reaction to the suppression of those sentiments would almost certainly have been as strong as the reaction of liberal Aucklanders to the sacking of the NZ Herald’s controversial cartoonist, Malcolm Evans.

It is hardly wise, in either Christchurch or Blenheim to tell your newspaper’s readers that your opinion, as editor, carries more moral weight than theirs. That, when it comes to deciding what is, and what is not, acceptable in an Al Nisbet cartoon – it is your judgement, and only your judgement, that counts.

Publishing Mr Nisbet’s cartoon would not have been made any easier by the response of that other group of important stakeholders in the Marlborough Express and The Press – their staff.

Most New Zealand journalists lean, to a greater or lesser extent, to the Left. This is especially so of those who graduate from the journalism schools in New Zealand’s big cities. Many of these graduates cut their teeth as journalists on the provincial dailies. The culture shock experienced in relocating to Blenheim (and even Christchurch) from Auckland can only be huge. When viewed from the conservative communities of the South Island, the People’s Republic of Grey Lynn must seem very far away.

No editor enjoys over-ruling the objections of his or her staff – especially when many of them are young, idealistic and expressing views with which, at a personal level, he or she may identify strongly. I well recall the occasion when, as editor of the Otago University student newspaper, Critic, the staff were so outraged by the contents of Michael Laws’ (yes, that Michael Laws) “Dragonfly” column that they point-blank refused to lay it out.

Then – as now – Michael had a large following, and I was reluctant to acquiesce in the censorship of his column (no matter how much I personally disputed its contents). Critic did not belong to me, nor the staff, and I firmly believed that the conservative students on campus, whose fees helped to pay for the newspaper, had as much right to read material supportive of their world view as their liberal and radical confreres (who got plenty!)

Eventually, we reached a compromise. Slap-dab in the middle of Michael’s column, the staff inserted the words “Fuck this is sexist!” in large and bold type. This judgement of Solomon was not, I suspect, available to the editors of the Marlborough Express or The Press.

The English philosopher, John Stuart Mill, wrote persuasively on the subject of freedom and the right of individuals to express their opinions. In his celebrated essay, On Liberty, he observes that: “The peculiar evil of silencing the expression of an opinion is, that it is robbing the human race; posterity as well as the existing generation; those who dissent from the opinion, still more than those who hold it. If the opinion is right, they are deprived of the opportunity of exchanging error for truth: if wrong, they lose, what is almost as great a benefit, the clearer perception and livelier impression of truth, produced by its collision with error.”

Mr Nisbet has not emerged unscathed from his collision with the truth. His contemptible (thank you Toby Manhire for choosing exactly the right word) cartoons have sparked a nationwide debate about race and class and children and poverty from which we, as a diverse people, can only emerge wiser and stronger.

Suppressing Mr Nisbet’s cartoons would not have magically eliminated the racist sentiments which they so powerfully and disconcertingly express. On the contrary, it would merely have hardened the hearts of his supporters against those who speak so eloquently of freedom and equality – but who then censor any person who dares dispute their definition of what is free and who is equal.

The editors of the Marlborough Express and The Press were right to publish Mr Nisbet’s cartoons. Yes, they were highly offensive to many New Zealanders – but that is the point. We forebear to censor error today, so that tomorrow, with the same disdain for the consequences, we can publish the truth.