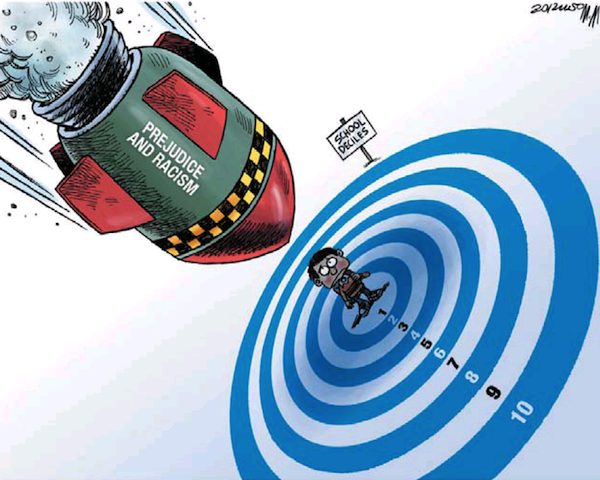 “We all instinctively know that hungry kids aren’t happy and healthy kids.  I want this to be the first of many schools and businesses that we put together.  I’m interested in what works and I am humbled by the support this idea has received already.  We are going to put together the package while in Opposition. We are not waiting to be in Government, because all our kids deserve better.”  –  John Key, 4 February 2007

Mounting pressure on National has finally yielded results; Prime Minister Key today announced that funding would be provided for some food in schools.

Never mind National’s core-support naysayers. They most likely never had to endure any degree of hunger (except maybe getting home late to a dinner of salmon, courgettes, greek-style salad, with a decent pinot gris).

The only thing that worries me is that this $19 million programme relies heavily on support from private companies; Fonterra and Sanitarium. Either one of those companies could pull the plug, citing commercial reasons; shareholder dissatisfaction;  or no particular reasons at all.

This happened in mid 2011, when the Countdown Supermarket chain withdrew it’s support from a Red Cross-operated programme. As the Herald report on 27 May 2011;

Countdown spokesman Luke Schepen said the supermarket chain gave more than $1 million in food and other help to the Red Cross breakfast programme from its start in 2007 until the end of last year.

Red Cross wrote to the 61 decile 1 schools in the programme this month saying it could not find another sponsor and the programme would finish at the end of this term.

It advised the schools to apply to the Kickstart programme run by Fonterra and Sanitarium, which provides milk and cereal to more than 400 schools twice a week.

It’s interesting that Countdown began it’s assistance in 2007. That was the year that then-leader of the Opposition, John Key, launched National’s own Food in Schools  initiative;

Two years after Key released the policy statement above, Countdown withdrew from the programme. A cynic might suggest that Countdown had fulfilled it’s bargain with National and could safely walk away.

Considering that Fonterra is a farmers co-op and the rural community have traditionally voted National; and considering that the Seventh Day Adventist church is a conservative religious group, whose members most likely also vote National – these are natural allies to the Tories.

Let’s hope that this is not a cunning trick by National to down-play this problem and  create a false assurance to the public that the government is “doing something”. That really would be cynical.

Of all the reassuring events recently, two polls on TV1 and TV3 reconfirmed my faith in the generosity of most New zealanders. Both  showed over-whelming support for introducing food in schools;

Most surprisingly, Patrick Gower revealed that 66% of National voters were in favour of a Food In Schools programmes, with only a “hard core” of one third opposing it.

Well done those 66%. You folk still have a soul and a heart.

Your naked selfishness and utter  lack of empathy verges on the  sociopathic. You would condemn innocent children to hunger simply because of some twisted, perverted desire to punish  parents who don’t measure up to your own precious ‘standards’.

As Hone Harawire pointed out yesterday (27 May) on TV3, it was public pressure that forced National to pay attention to this growing problem in our society, and to come up with something – anything! – as a solution.

It is inconceivable that we  cannot do something for the children of the poorest families in our own country. Especially when Sweden, the UK, Canada, etc, already offer this most basic service.

Why do we call New Zealand “Godzone” if not to practice what we preach in terms of egalitarianism and helping one another.

This achievement was the result of  a broad people’s movement. Whether it was Bryan Bruce and his incredible  documentary, “Inside Child Poverty“- or individual citizens such as this Facebook user wrote,

“ The simplest way to address this would be to increase the minimum wage, my wife teaches in a decile 1 school many parents who are working are struggling. Living in the eastern bay of plenty average incomes here are the lowest in NZ. Parents working as pickets or packers in the kiwifruit industry earn bugger all. The myth that those struggling to feed their kids are on the dole is exacting that, many are working long hours , but if you are on the minimum hourly rate in NZ, you only need a doctors bill, or. Car repairs and your family budget is negatively impacted. The concentration of wealth in New Zealand was never better illustrated, than when recently it was revealed that, the CEO of solid energy NZ was suspended on indefinite leave on full pay at home gardening on $5,000 a week. Contrast that with people working 40 hours plus a week and end up with less that $350.00. Lift the minimum hourly rate so working parents don’t have to struggle to put food in the table…” – Alex Dobie

– Thousands of New Zealanders put unrelenting pressure on National and sent one, simple, message to John Key; do the right thing.

The problem with this policy is that a private business offering charity can walk away any time it decides, leaving the programme unsupported.

“This is something that corporates do because they have a corporate social responsibility. So I’d imagine there are situations where they could walk away but they’re pretty unlikely to because it’s pretty good for their brand – because it’s genuinely a nice thing that they’re doing.” (28 May)

That is precisely what happened in mid-2011 when the Countdown supermarket chain withdrew contributing to the Red Cross’s food in school programme.

Let’s hope we don’t see a replay of that event.

On a related note, it is appropriate for Sanitarium to be contributing to a Food in Schools programme. Being owned by the Seventh Day Adventist church, Sanitarium pays little or  no taxes because it’s owner (the church) has charity status.

At least now Sanitarium can put something back into the community.

Whatever reservations I might have on National’s motivation and long-term agenda, the main thing here is that more children will  be fed at schools. That is a positive step, and one to be encouraged.

Until a Labour-Greens-Mana coalition can implement Hone Harawira’s Food In Schools Bill, National’s programme is better than nothing.

At least it will put nutrition into young, empty bellies. And really, that is what counts.

On child poverty, to the Sunday Star Times…

Beehive: Breakfast programme part of the solution (28 May 2013)

Dominion Post: Govt rolls out expanded food in schools (28 May 2013)