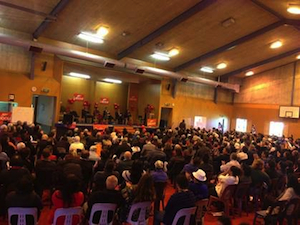 I AM CONSTANTLY AMAZED at how little most people know about how electorates are won and lost. This applies not only to ordinary voters, whose interest in elections is purely triennial, but also to many academics and journalists whose interest in politics is permanent and professional. In this respect, no one has amazed me more than the late Bruce Jesson (1945-1999).

Bruce was one of this country’s most respected political commentators (his column in Metro magazine was a must read for anyone with a serious interest in New Zealand politics). His magazine, The Republican, was packed with insightful analyses – as were his many books and articles.

But for all his deep knowledge of New Zealand politics, Bruce was entirely innocent of the nuts and bolts of party-based electoral politics. I discovered this shortly after the formation of the NewLabour Party in 1989. I had engaged Bruce in what I thought was a straight-forward discussion about organising in the electorates when I noticed Bruce’s eyes widening in amazement. Clearly, the activities I was describing were entirely novel to him. Excitedly, he called to his wife, Joce, to “Come and listen to this!”

What shocked Bruce was the revelation that on any election day a well-organised electorate is able to tell the party’s candidate not only how many people have voted – but also which way they’ve voted. As the hours go by this information becomes more and more complete until, if all goes according to plan, the candidate and his or her campaign manager are able to guess to within 200-300 votes what the final tally will be. A true master of what’s known as the “Blue Dot/Red Dot System” – Jim Anderton’s name springs to mind – can tell you not only what his own vote is going to be, but what his opponents are likely to get as well.

I could see Bruce struggling to understand how anybody could possibly know how someone else had voted: didn’t we cast secret ballots? Was I telling him that we were living under some sort of corrupt Tammany Hall system?

“How do we know, Bruce?” I responded, trying hard not to laugh. “Because they tell us.”

I then went on to explain the process of canvassing. How a well-organised party can put dozens of party workers “in the field” – knocking on doors and recording whether people are “Definitely Labour”, “Possible Labour”, “Unsure”, “Possible National”, “Definitely National” or “Refused to Say”. This information is then collated, updated, and eventually translated into a massive database in which the preferences of as many voters as possible are recorded. On election day, party scrutineers at every polling station record the names of those who have voted and runners take the information back to the party’s election day headquarters where it is matched against the master database.

The more thoroughly an electorate is canvassed, the more completely its voters’ preferences can be known and the more confident a candidate can be that every one of his potential supporters has cast their ballot. In a close contest, the margin of victory is almost always determined by the successful candidate’s “Election Day System”: by how efficiently his or her campaign team is able to “get out the vote”.

There is nothing in electoral politics more pathetic than a candidate who loses an election because he or she simply did not know the names and addresses of the voters who could have won it for them.

Back in the days of First-Past-The-Post, only those parties which had mastered the “dot” system, and were capable of mustering the 200-300 people required to staff an effective Election Day System, stood any chance at all of becoming the government.

The arrival of Proportional Representation led many to believe that the old ways of “getting out the vote” were no longer relevant. Campaign experts looked to sophisticated polling, direct mail-shots, the use of phone canvassing and the manipulation of the data-rich discs supplied to all registered political parties by the Electoral Commission to solve the problems associated with the Party Vote transforming the entire country into a single electorate.

They were wrong. As the long-serving Speaker of the US House of Representatives, Tip O’Neil, put it: “All politics is local.” And the two extraordinary campaigns run by Barack Obama’s supporters have proved Tip right. Nothing beats feet on the street and faces in front of the voters. Modern information technology can certainly make the job of collating, updating and translating canvassing data faster and easier, but neither I-pads nor Facebook pages can ever take the place of living, breathing human-beings standing on someone’s doorstep and talking to them about their party’s candidate.

Apply all this information to the Ikaroa-Rawhiti by-election and what conclusion would you reach?

The questions that need to be asked are:

I know the Labour Party can answer each of those questions positively. I have real doubts that any of the others can – with the possible exception of the Maori Party.

That means everyone except Labour and (maybe) the Maori Party will have to run their campaigns with volunteers brought in from the outside. In any seat, that would be less than desirable. In a Maori seat, it’s likely to be counter-productive.

Relying on outside volunteers also means relying on IT experts to manipulate the Electoral Commission’s data discs so that the most likely demographics can be targeted for direct mail, phone canvassing and pamphlet drops. In the absence of those IT skills, the parties will have to fall back on the crudest, scatter-gun tactics: mailbox drops; newspaper and radio ads; videos.

And none of that is going to win the seat.

So, if I was a betting man, I’d put all my money on Labour.

Just take a look at the photo accompanying this posting. It’s of Labour’s selection meeting in Napier – and there’s got to be 400-500 people present.

Did any other party attract even a tenth of that number? I don’t think so.

That goes double for politics.