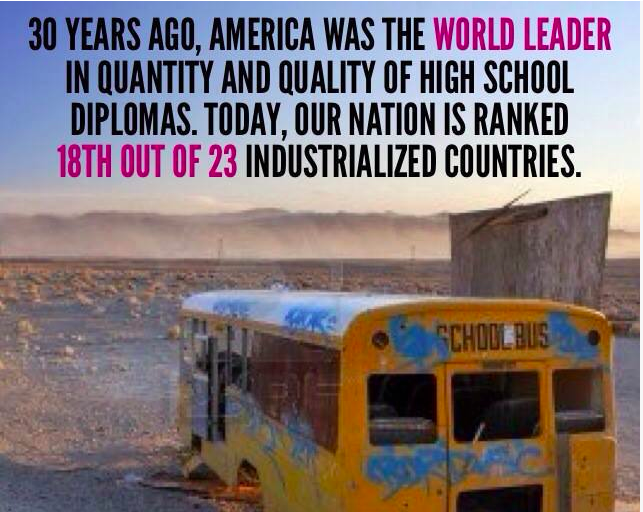 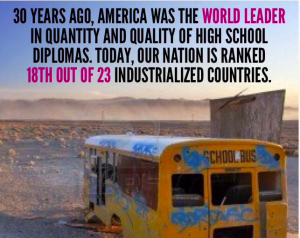 Listen carefully to what this teacher of 15 years says in her video of resignation.

Listen as she describes teaching under the changes brought in by educational reforms; Teaching to the test, scripted lessons and planning (done by administrators and handed down), lack of time for creativity, teachers being evaluated by students and sacked if just one for says “needs improvement”.

This is the McCarthy Trials, or for those literary readers, The Crucible.

People thrown into the fire and under the bus, with no recourse and no protection even from the most spurious of claims.

Imagine that happening to you at work tomorrow.  Imagine how that affects your life.

These are teachers.  Teachers!

When did they become the focus for such hateful treatment?

When did educators become the enemy of the state?

These are people who decided to dedicate their professional lives to educating children.

We should all be asking what any government’s motives really are when they behave this way towards educators.

This will be New Zealand teaching very soon, as the very same reforms are being brought in, bit by bit, here too.

These are just the start down the slope towards standardised tests and then standardised lessons.  No room for capturing a child’s interest or using a teacher’s expertise or passion – just teach to the script and administer that test.  And so much money diverted away from the classroom and authentic learning experience to pay for those tests.  So very much money wasted.

You want innovators?  You want people to think outside the box?  Tough.  They will be taught to think inside the box – or the test bubble, at least.

Because all that matters is the result on the test.  Isn’t it?

Then there is a push for Performance Pay.

From my conversations with people outside of education, many think it sounds great for educators to be paid this way.  The best are rewarded, the worst are penalised.  But teachers know it is not nearly that straight forward.   Even a PISA study into performance pay  acknowledges that there is “no relationship between average student performance in a country and the use of performance-based pay schemes“.

And yet performance pay for teachers is widespread in American schools and it being imposed in England, now, too, despite much resistance from headteachers, teachers, and parents.

Worse still, performance pay is the beginning of the end of true collegial teaching, where teachers share knowledge and resources and support each other.  Even those teachers who feel sure they would get the reward, be given the higher pay, do not want this.

That speaks volumes.  Because we do not want to be pitted against each other, we want to work together for the kids.

The PISA report puts it best when it concludes that “countries that have succeeded in making teaching an attractive profession have often done so not just through pay, but by raising the status of teaching, offering real career prospects, and giving teachers responsibility as professionals and leaders of reform.“

Which leads nicely into charter schools.

Anyone who is well enough informed about these knows that the end result of charters is often that the public schools nearby are run into the ground while the charter thrives.  But how does that happen?

Well it is complex, so I will take you back to the testing and let’s look at that alone.  Charters are very well documented for their practice of getting rid of students who will get low test scores.  Simple as that.

Got dyslexia or Asperger’s or any other special need that might affect your scores?  Dumped.

Not good at tests?  Dumped.

Then the public system has to take those dumped kids, along with their difficulties and their distress, and help as best they can, often right before testing.

And guess which school has to register the lower scores from those dumped, distressed, defeated students?  Not the school that was meant to be teaching them right up until that test.  Lawdy no,

The school that has those test results against their record is the one they were at for test time, even if they were there just one day or a week.  So the public school system that didn’t even get chance to teach and help those students, didn’t receive the funds all year for them, but does have take responsibility for the low test results.

And the end result?  The charters’ scores  go up, the public schools’ scores go down.

It’s an excellent exercise in marketing.  The kind of thing we expect from someone trying to sell us the latest games console or who is trying to get us to vote for them.

It sure as hell isn’t about educating those children.

The clever, the tricky, the stubborn, the compliant, the enthusiastic, the tired, the supported, the defeated, the lost, the dreamy, and the ones that aren’t good at tests.  And they do that because they know that what matters most is helping all of the students as much as possible.

But they can only do that if they are safe from the kind of divisive and bizarre reforms that saw Ellie Rubenstein and many like her lost to the system.

So don’t for one minute think these small incremental changes happening in New Zealand education are benign or ‘not so bad’.

They are the start of a very, very slippery slope, and at the bottom of that slope are a heap of tired and battered bodies.

Will your child be one of them?