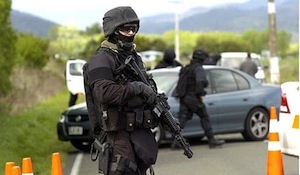 With the Independent Police Conduct Authority report on the 2007 Urewera raids released last week this sorry saga is entering its last stage. The report was a refreshing look at events and for the IPCA it was surprisingly objective.

Green MP David Clendon was right to suggest an element of racism in the police actions at Ruatoki. If they had done the same in Mount Eden Village or on Remuera Road the police would have already been sued down to their last pair of underpants and the Prime Minister at the time, Helen Clark, would have resigned to live out the rest of her life in political ignominy.

However the IPCA report glosses over the reasons behind the raids. They tell us the police were justified in being concerned at what was going on in these camps but subsequently they acted “unlawfully, unjustifiably and unreasonably”.

There was no analysis of the evidence which led to the raids. This is important because after 18 months of surveillance, 30,000 pages of transcribed phone conversations, email and text messages, hundreds of hours
of video recordings, many dozens of days in all sorts of courts the police are still unable to shed any light on what was actually going on.

“What we have never heard … is any explanation from those who were apparently practising guerrilla tactics with firearms and molotov cocktails at their military-style training camps, as to what they were training for”.

Similar comments have come in the intervening years from both the former and current police commissioners as well as the crown prosecutor.

The point is that the police are still today left with what was “apparently” happening at the camps but that didn’t stop them launching one of the biggest police operations in recent years and at the outset labelling as “terrorists” the 18 people arrested. This should be of extreme concern yet was missing from the IPCA report.

Yes the police should have been concerned and should have investigated these camps. They should have sent their iwi-liaison officers into Ruatoki to say to Tame Iti “Look we know you’ve been organising camps of various kinds in the Urewera, guns included, for 40 years or so and in fact that you were paid to do so as a detached youth worker back in the 1970s. However we’ve had reports these latest camps have some people wearing camouflage and running around with guns and even a couple of Molotov cocktails. People are rightly concerned about this so what’s going on this time?”

The police didn’t and as they say the rest is history.

It was left to High Court judge Rodney Hansen to inject his own personal interpretation into these events. In a spiteful manner, delivered with as much self-serving pomposity as he could rouse, he ignored the failure of the jury to reach a verdict on the main charge of participating in an organised criminal gang and used convictions on some technical breaches of the Arms Act to sentence the remaining four defendants for involvement in a “private militia” – for what purpose he didn’t say. Hansen went further than even the
police had alleged. He used sentencing to retry the case and demonise the defendants.

The failure of the higher courts to rein in Hansen’s imagination shows one arm of the state – the courts – doing their best to save face for another arm – the police. Small wonder the Police Commissioner seized on Hansen’s comments last week in defence of the indefensible.

At the time plenty of other commentators asked the defendants for an explanation of the camps but the charges were serious so the advice from legal counsel was conservative – whatever you do don’t say anything to the media. Even when defendants wanted to talk they were told not to – not because they might incriminate themselves but out of concern for others facing serious charges. In the meantime the right to remain silent is an important principle for a defendant and the over active imaginations of the police or judges should not be allowed to fill the gaps.

The most important thing to remember from this case is that it was people power on the streets which successfully pushed back against state forces keen to flex their new post-September 11 muscles against political activists. In this case we are safer for the actions of the public rather than the actions of the police.