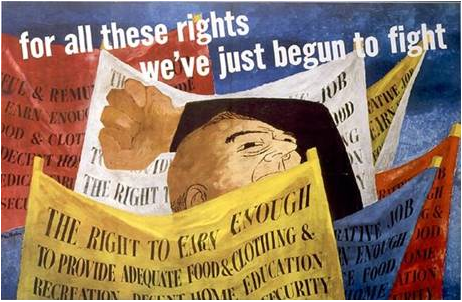 THE AMERICAN WORKING CLASS has always been one of the great pivot-points of world history. As the dissident US film director, Oliver Stone, contends in his Untold History of the United States, had events taken only to a slightly different course in the final years of World War II American workers could have led the world into the “broad sunlit uplands” that Churchill had held out to its people in the darkest days of 1940.

Had Franklin Roosevelt’s progressive Vice-President, Henry Wallace, been reappointed at the 1944 Democratic Party convention in Chicago, and not replaced, at the insistence of the reactionary Party bosses, by Harry S. Truman, it is possible that the atomic bomb would never have been dropped, the Cold War never started, and the long battle for racial and gender equality fought and won twenty years earlier.

Backed by an AFL-CIO (the US equivalent of our CTU) that had yet to be corrupted by the compromises and deceptions of the Cold War, Wallace had every chance of transforming the Democratic Party into an organisation more closely resembling the social-democratic and labour parties of Europe and the British Empire.

In the face of the America that did emerge from the Second World War, this splendid future that might have been is painful to contemplate.

Even more painful is the fate of the progressive American trade unionist.

Like so many other young Americans in the 1960s and 70s, younger members of the union couldn’t help being caught up in the era’s tumultuous events. Indeed, for a brief couple of years in the early 1970s it seemed that the militant and progressive unionism of the 1930s was on the point of reasserting itself.

In the United Auto Workers, the United Mine Workers and the notorious International Brotherhood of Teamsters (the crème de la crème of the United States labour movement) rank-and-file campaigns for a radical democratisation of both the American labour movement and the US system itself gained substantial backing.

Unfortunately, the AFL-CIO’s failure to crash on through the right-wing Republican anti-union barriers of the 1940s had created conservative union hierarchies which, by the 1970s, were too firmly entrenched for these rank-and-file-led revolts from below to dislodge. The radical moment of the early 1970s passed, and the steady decline in union density gathered pace.

Two pieces of writing by members of the UAW capture with a raw, working-class eloquence both the radicalism and the resignation of a rank-and-file that knew there was something more to reach for in American society, but never quite managed to grasp it.

Gregg Shotwell was a machine operator and rank-and-file UAW activist for more than thirty years. He is also what Antonio Gramsci would have called an “organic intellectual”, whose essays and poems on unionism and working-class life have by turns, inspired, intrigued and aggravated his fellow unionists through bitter decades of struggle.

His poem, “Strike Back”, captures the barely repressed anger and programmatic confusion of those who ended up on the losing side of America’s class war:

Dewey Burton was another member of the UAW. His claim to fame owed little to the rank-and-file activism of radicals like Gregg Shotwell. Dewey is remembered because, by pure happenstance, he ended up becoming the news media’s notion of quintessential American blue collar worker.

Dewey’s colourful views were often canvassed by and broadcast on the American television networks and his contributions are remembered in US labour historian, Jefferson Cowie’s, excellent book: Stayin’ Alive: The 1970s and the Last Days of the Working Class.

By the middle of the 1970s, even among the staunchest of American unions, something important was beginning to fade. The conviction, born of the great CIO organising drives of the 1930s, that the union could take working class Americans to a new and better world, was waning.

“Something’s happening to people like me – working stiffs, as they say – and it isn’t just that we have to pay more for this and that or that we’re having to do without this or make do with a little less of that. It’s deep, and hard to explain, but it’s more like more and more of us are sort of leaving all our hopes outside in the rain and coming into the house and just locking the door – you know, just turning the key and ‘click’ that’s it for what we always thought we could be.”

Which for pure bloody pathos is fucking hard to beat. Because when the American working-class locked the door on “what we always thought we could be”, the key went “click” for the working-classes of the whole western world.