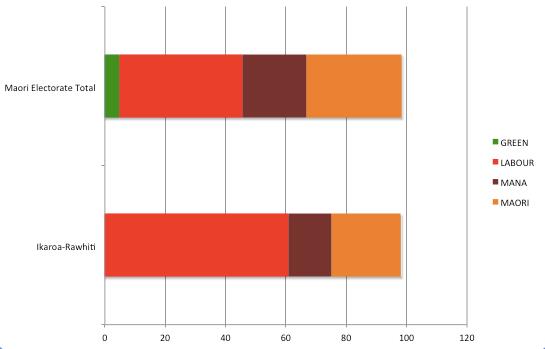 CONFIRMED: Shortly after posting on The Daily Blog – the Greens confirm they are running in the by-election

The Daily Blog Tipline is buzzing with rumors that the Greens are about to announce they will throw a candidate into the Ikaroa-Rawhiti by-election.

The Green Party needs to change the perception that they are a white middle class party with holiday homes on Waiheke Island if they are to erode Labour’s tight grip over Auckland’s Maori and Pacific Island electorates.

The Greens managed to beat their nationwide Party vote in only a handful of the 18 Auckland electorates so they badly need to generate more political street cred with the voting block that isn’t white and middle class if the want a real shot at 15% in 2014.

The question will be if Labour and the Greens are ready to butt heads together on the campaign trail. Their inclusion in the race will infuriate Labour, as it will erode Labour vote more than anyone else making a 3 way race into a 4 way race where the real prize will be second place.

MANA has a selection process under way for their two nominees, Te Hamua Nikora and Leon Hawea. Both have explosive oratory skills and I would expect to see a very different type of youthful campaign from MANA.

No word on the Greens candidate, it could be a parachute (Metiria?) or a local involved in the anti-Fracking or anti-drilling campaigns.

Labour have a real problem on their hands with the inclusion of the Greens in terms of their candidate selection. Labour seem hellbent on parachuting in Shane Taurima because Meka Whatiri is facing difficulties in being accepted by some branches as a candidate. That could work if the race was weak, but in a 4 way race, ignoring the need for a local could burn them.

When it was Labour, Maori Party and MANA, the battle was for second place, but with the Greens joining, Labour will be nervously eyeing up their winning margin.