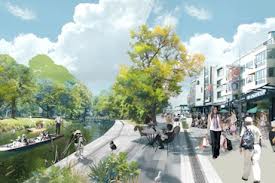 Artist impression may not match reality

On Saturday I took a good friend to Greenlane Hospital for some tests. Nothing major, no drama, she just needed someone to be able to drive her home again as she wouldn’t be able to see properly afterwards for a few hours. It was nice to be able to catch-up between the tests and in the car, as we are both busy people and don’t get to talk much. I spent a lot of time in waiting rooms 1, 3 and 6.

While I sat, and waited, I couldn’t help but think of Christchurch.

I’m not particularly familiar with Christchurch – I’d visited three times before the earthquakes, and not stayed long or seen much on any of those occasions. My abiding impressions from then was that the Garden City was flat, Pakeha, a bit chilly, and well-treed. There was a modest river running through it.

Two weekends ago I returned to Christchurch for a family wedding on the western outskirts of the city. I stayed close to Hagley Park, and spent some time in the area around the Re:Start mall. It’s good to see that well off Christchurchians can buy Trelise Cooper and designer jewellery, there or at Ballantynes, and I guess there is a morale boosting factor to having those things open, but I couldn’t help wondering where the Glassons was. Is the rebuild just for those with the money to stay and make themselves comfortable or will it really cater for those who are still there because they can’t afford to move away?

I could not believe how little has been rebuilt, and how little has been demolished too. Buildings that are fenced off, standing seemingly as they were when the red zone was closed to my unpracticed eye, and with no indication of anything changing any time soon. Rubble, gravel (which is really just smaller rubble), and the forlorn sound of pointless pedestrian crossings near the wreck of the Cathedral. I remember Christchurch as being green, before, but now it all seems grey.

Efforts had clearly been made to brighten things up. We visited the Pallet Pavillion, played Gap Golf, saw some pretty cool and thought-provoking public art. But the greyness and the gravel overwhelmed it all. We didn’t have an opportunity to go into the east.

The sense of waiting was palpable. Waiting for someone to make a move, waiting for something to happen, waiting for the new normal to really begin, because the greyness isn’t enough. Community-led efforts, like Gap Filler, were noticeable and wonderful, but it’s not enough. Tagging was rife, and not just in the more desolate areas I went through. A sure sign that there are lots of young people with not much to do, and that “nice-to-haves” like graffiti eradication have had to go by the by.

Unlike the rooms at Greenlane, where those patiently waiting were quietly seen and free to go home again, I had no sense that there was anyone taking responsibility for moving things along.

And there should be. Central government and local government have roles, huge ones. The fact that there are people living in caravans and using portaloos two years later is unacceptable. This is the whole point of politicians (well one of them); when the chips are down we get things sorted so people have their basic necessities and we use the bulk and resources of the state, or the council, to get it done quickly and well. Yes sometimes we’ll make mistakes when we rush, and I’m not in favour of urgency that undermines democratic processes. There is room for a balance, and that doesn’t seem to have been found in Christchurch.

A final anecdote, that should make you angry I reckon. A relative moved to Christchurch between the first and second big quakes. They lived in Rangiora and in the second big round the granite kitchen bench got cracked. No troubles getting it fixed; sweet as. They’ve now sold that house and moved overseas. Yet people who can’t afford granite benches in the first place don’t have basic heating requirements for yet another winter.

We should be ashamed of this. I know I am.