We start of with Chris Trotter on Bowalley Road writing about  The Lies That Bind: National’s Attack On Parliamentary Sovereignty. Chris shows how National’s shocky deal with Skycity and it’s outrageous attempt to bind future Parliaments is not as straight forward as it seems. Read the full story and learn why the Greens are on solid ground when they commit to abrogating the Skycity deal. Especially when – Shock! Horror! – the Nats have done the same thing in the past

The Standard has it’s usual stable of excellent writers,

On the Auckland Transport Blog, Matt L writes that Apartments aren’t the only 3 storey buildings, and criticises the hysteria that some in the community seem to have about Auckland’s Unitary Plan. Matt underlines his point in a very clever way.

On Frankly Speaking, Frank  has been doing a series on the Budget, with  Budget 2013: petrol taxes the most recent, and lists ALL the taxes which the Nats have been surreptitiously increasing or implementing. Now call me overly sensitive – but if Labour had tried to pull this shit, the MSM would be over them like flies on a fresh cow-patty.

On Frogblog, Holly Walker points out a  Crackdown on overseas borrowers – a real life example of a family overseas who will be  badly impacted by National’s autocratic repayment demands.

It’s getting fairly bad when families – the core constituency (supposedly) of National, are starting to feel the pinch.

My thoughts go backs to the early 1990s, when the likes of Jim Anderton warned the country where mounting student debt would take us. His prognostications have come scarily true.  Oh well, it’s what New Zealanders voted for…

QoT on Ideologically Impure is on good form when she blogs  When the right is failing even in terms of their own rhetoric – and points out the if a company was run as National is running New Zealand Inc, that company would have collapsed by now. Then QoT refers to Solid Energy… Oh.

And yet, still no sign of the Herald’s DEMOCRACY UNDER ATTACK banner … with National’s attempt to pass autocratic legislation, under Urgency, to undermine the Court’s decision to pay carers for looking after family members with disabilities. QoT plays out a little Thought Experiment; what would Farrar, Cactus Kate and WankOil do?

Idiot Savant on No Right Turn says it is  Not acceptable that Gerry Brownlee and National are dictating what Christchurch can and can’t do. National’s proclivity for riding roughshod over Christchurch’s needs is yet more evidence of this government’s lack of  respect for the democratic process.

It’s Worse than I thought, write’s Savant regarding National’s legislation to remove the rights of caregivers for disabled family members. I/S quotes the relevevant legislation,

Do people understand what National is doing? The Nats are denying a group of people the right to go to Court or to the Human Rights Commission. Key & Co are legislating away the rights of a sector of our society.

On the same issue; What Andrew Geddis Said (see below; Post of the Day), But Shorter and With More Swearing writes Keith Ng, on Public Address. Look at the image below, 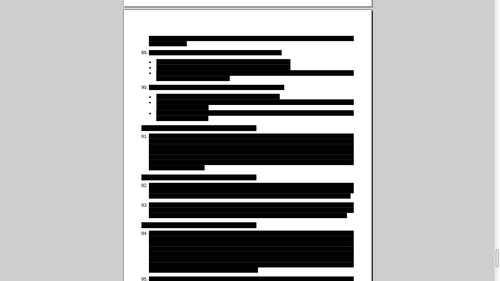 You’re looking at the Regulatory Impact Statement (RIS) for the Public Health and Disability Amendment Bill. Basically, the courts said that the Government had to pay family members who looked after people with disabilities (because not doing so was discriminatory), so the Government passed this law to say: “Yeah nah.”

The RIS isn’t just redacted for the public – it was redacted for MPs. *Parliament* voted on this, with all the relevant facts blacked out.

In effect, “Parliament” passed something, sight-unseen.

Is that the sound of jackboots marching in formation, down the street?

Well it certainly ain’t the MSM – they aren’t making a sound about this.

Robertguyton also blogs on this issue, Naming National, and writes,

The Labour government under Helen Clark was nicknamed ‘Helengrad’ on the grounds that it was an authoritarian power-mad tyranny, typified by the times Clark signed a painting that she didn’t paint, and drove really fast in a car somewhere, crimes that might sound trivial now but consumed the National Party for years and still get mentioned dozens of times a week in the Kiwiblog comments.

There’s no amusing name to describe National’s authoritarian streak, but it seems a lot more pronounced than Labour’s under Clark. Andrew Geddis details the latest incident: legislation passed under urgency discriminating against the family caregivers of severely disabled people, containing an ‘ouster clause’ which prevents those discriminated against from challenging the law in court.

If this doesn’t explode into the MSM consciousness, then, Obi Wan, all hope is lost…

Meanwhile, on Imperator Fish, Scott Yorke gives us an insight  Why the Regulatory Impact Statement was so heavily redacted. I could tell you why, but… um… well… oh heck, go have a look yourself.

Brian Edwards, on Media, critiques Weekend Herald columnist John Roughan’s nasty little diatribe against Angelina Jolie.  On whether Angelina Jolie made the right decision to have a double mastectomy, Brian takes religious conservative columnist Roughan to task for some misognystic verbal-violence against Jolie.

Like… WTF business is it of Roughan, anyway? Read Brian’s blogpost. Be outraged.

On the issue of sexism, this is one of the best film reviews I’ve ever read; Equality, the final frontier? In The Hand Mirror, Scuba Nurse writes a scathing review of Star Trek Inside Darkness.

Ok, I haven’t seen the movie yet, but if it’s anything like it’s predecessor – *facepalm*.

At least in the 1960s, script-writers were sexist pigs in their depiction of James ‘Tomcat’ Kirk – they had an excuse. That was fifty years ago and the feminist movement was only just getting off the ground.

What excuse does Hollywood have now? None. But going by an Anonymous comment posted on The Hand Mirror, I can understand that sexism is as bad now as it ever was. WTF, we should know better.

Can’t get onto The Civilian. Evidently the satirist known as Ben has written something generating so much traffic that his website has crashed. Colin Craig – take another bow, mate.

On Pundit, Andrew Geddis blogs about National’s legislation to remove the rights of caregivers for disabled family members and writes, I think National just broke our constitution.

When you read Andrew’s piece, you get an idea of the apalling nature of this legislation and National’s utter contempt for the rule of law and natural justice.

Labour and the Greens are going to have their work cut our for them, post-2014, repealing these odious laws.