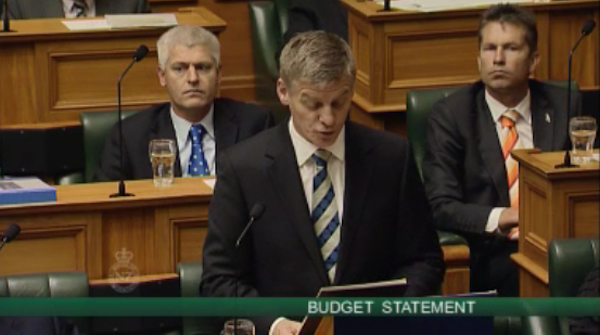 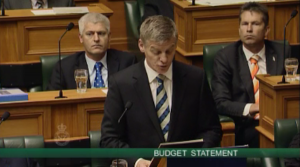 THE STATE OF IT: Rhetoric aside, what the National-led Government’s Finance Minister Bill English wants from us is to embrace his fiscal plan with a smile and an air of optimism. But New Zealanders should read the detail that lies behind English’s Budget speech because there lurks a fiscal-incompetence devil. And it will take more than an exorcist to dislodge that specter of regression from this fiscal engine room.

What this gaggle of good guys has produced is a diversion-plan, a blueprint, on how to win the 2014 General Election. Their premise is a ‘it’s about the economy stupid’ strategy, where it wants the voting public to believe it is the paragon of economic competency.

Well, the detail shows they are far from it. Here’s why.

Bill English has indicated that the domestic economy has weathered the global financial storm relatively well, as compared to the Eurozone countries, because of the debt-repayment regime driven by the Labour-led governments from 1999-2008.

This year’s Budget indicates this National-led Government wishes to ease out of its borrow-and-create-a-debt-mountain that it created.

While the Government is on target to achieve an operating surplus (before gains and losses) by 2015 it fails to apply solutions to the underlying causes of debt dependence, particularly in the current account area. Tragically, unless governments move to address the current account deficit, New Zealanders drive to achieve reasonable progress and wealth will fail.

Compounding this, the country’s overseas net debt will top $200 billion by 2017 and the current account deficit topping $17 billion a year.

That net international investment position has worsened since the pre-budget fiscal update and now stands at $162.0 billion, or 74.1 percent of GDP (ref. IMF).

Certainly National has been singled out by the International Monetary Fund for playing a high-debt-thin-return fiscal game.

This regime has enabled the National-led Government to redistribute wealth to wealthy New Zealanders and service a moderate social services spending programme.

The IMF advises the John Key Government cool down the Kiwi dollar (it has not moved to do so); move to apply debt-reduction measures that address New Zealand’s massive current account deficit (it has failed to move to do so).

The IMF has warned that New Zealand is vulnerable to global upward interest rate trends – that should it have to pay higher rates of interest, and due to the mountain of debt owed to offshore lenders and financiers compared to the lesser proportion of investment-flows back into New Zealand – can have a corrosive and destabilizing impact on our economic recovery.

He pitched: “Has he seen the International Monetary Fund’s forecast that New Zealand will have the worst current account deficit in the developed world this year and every year through to 2018, and, if the IMF is anywhere close to the mark, does not that prove absolutely he has failed in his stated ambition to rebalance the economy?”

English replied: “No. I do not agree with that. I have seen the IMF figures. Of course, the irony of this criticism from the Opposition, as pointed out in the Business and Economic Research report that Opposition members were waving around a few days ago, is that if the economy did adjust faster to exports and savings, it would be at the expense of household consumption and household incomes…”

English diverted: “Well, if it is a measure of it, the worst current account deficit under this Government, which is what it is today, is less than half what it was for the last 3 years that the Labour Government was in power.”

Clearly the Finance Minister is loathed to enter into a rational debate on the current account deficit. It is an Achilles Heel for this National-led Government. It is reticent to explore solutions to ease its grip on the nation’s domestic economy.

It would have to overturn what it created in the 1990s when it eased the wheels of foreign owned banks to set up in New Zealand, for foreign investors to acquire New Zealand-owned banks and lenders – even the iconic Bank of New Zealand.

This National-led Government would have to reverse its trend where it permits, even facilitates, the flow of New Zealand taxpayer money from government, to foreign owned social service providers like Bupa Care Services, Ryman Retirement Villages and healthcare, even Serco.

The out-flow of our taxpayer funds transform into profits for these multinational companies. That profit through skilled accountancy becomes money-owed to these service providers’ offshore owners. Shareholders from the Isle Of Wight to Brussels, to Zurich, to New York, to Tokyo, to the Cayman Islands all prosper at New Zealand’s expense.

This is what Bill English and the National Party Cabinet refuse to act on. They fail to address why this country cannot afford to pay the next generation of superannuitants. They are committed to freeze our tax contributions to the Cullen Superannuation Investment Fund until 2022.

Arguably the money-pipe that flows offshore prevents us from getting decent well-paying jobs, prevents us from adequately feeding the children among us who go hungry, ensuring the elderly are ok rather than trying to survive the winter while living in cold damp houses because they cannot afford to pay the power-bill demands slapped on them from a market the National Party set up while in government in the 1990s.

This current account treadmill, created by the debt-mountain that this lot created cannot be sustained. They know it. But they wont do anything about it. They wheeze the necessary rhetoric. But when questioned on it in Parliament they point to the past and say ‘awww it isn’t as high as when that lot were in power’.

The honorable reply would have been: ‘Yes, there are reasons why the current account deficit is so ridiculously high, the last government failed to address this, and we acknowledge solutions must be constructed.’ But you wont hear that. Not because they can’t, but because it would be admitting defeat, admitting that their extreme ideology has failed.

Where Does Your Tax Go?

Do you think you are getting value for money from this lot? I’ll leave that thought with you.