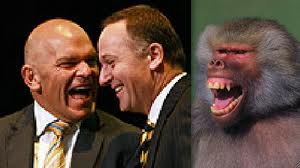 Why does the extreme right think that — in the face of all the evidence — denying a problem exists amounts to a tenable political position?

Rodney Hide may be on the outer in right wing politics, but he’s working hard to make sure that we know he’s still around. In his Hidesight column in the National Business Review last week, Hide reminded us that he thinks climate change is all nonsense:

The global warming hullabaloo has always been a religious movement. It has never been scientific. And as its political potency has waned, the modern-day clerics have become ever more strident.

Hide took as his text a Q+A interview in March in which VUW climate scientist Jim Renwick discussed the relationship between last summer’s remarkable drought and ongoing warming. Unfortunately, Hide has to misrepresent what Renwick said to make his very first point. In the interview, Renwick said that the evidence that greenhouse gases were causing global warming was beyond doubt. “There’s no other explanation that’s remotely plausible,” he said.

Hide turns this into “He was in no doubt that man-made global warming was causing the summer drought” — a straightforward misrepresentation of Renwick that then provides him with a springboard for a mishmash of distorted facts and sceptic tropes.

Hide is right up with the latest in denier thinking, having been a host for British far right politician and climate inaction campaigner Christopher Monckton during the Christchurch leg of the potty peer’s NZ tour. There’s been no warming for 17 years, apparently.

Tell that to the Greenland ice sheet, or the Arctic sea ice. Tell that to the warming oceans. Global surface temperatures may not be shooting up as fast as in the recent past, but heat continues to accumulate in the climate system. Rapid climate change is here, now.

So why can’t Hide see it? The answer is that his own argument — that belief in climate change is a religious act — applies far more accurately to those denying its reality than to scientists like Renwick.

A small group of embattled true believers, confident that they alone know the truth of the matter, see conspiracies all around. It doesn’t matter that the overwhelming majority of credible experts say that warming is a problem, or that basic physics says that future warming is about as certain as anything in science ever can be. No, the little band of climate deniers goes to its evangelical meetings with charismatic charlatans, and proselytises its sad beliefs in the pages of the NBR. No wonder the Flat Earth Society was so keen to welcome Monckton to New Zealand.

The tragedy in all this is not that Hide is a fool. He is not. But the adoption of outright climate denial by the libertarian right effectively shuts that strand of thought out of the debate about solutions. That is their loss, and perhaps our gain — but it makes for a weaker political process. To battle this issue, which will define all our lives in the coming decades, we need all hands on deck — even the ones we disagree with. It’s high time for Hide and his friends to rejoin the real world.