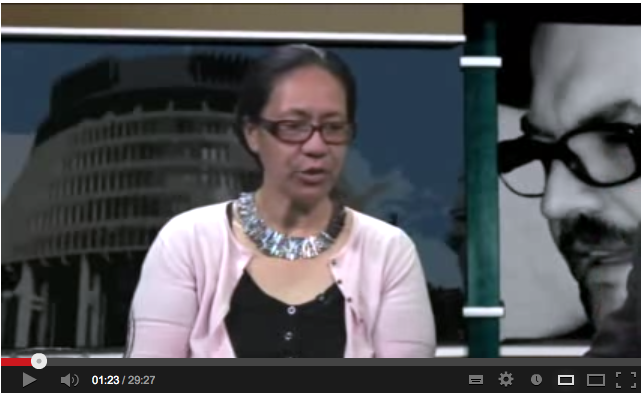 I’ve been very lucky to have had Claudette on Citizen A, and will certainly be extending the opportunity for her to appear on the show again once she is a National Party List MP.

As for Gilmore’s replacement off the list, Claudette Hauiti, she has not impressed despite the CV. Going from her appearances on Tumeke blogger emeritus, Mr Bradbury’s ‘Citizen A’ TV panel show she is a second-rate flunky whose No. 63 placing was for a good reason. If anyone has the time to go through the footage perhaps a montage of all the appalled and exasperated facial expressions and retorts from Chris Trotter as he respondes to the dumb-arse things Hauiti says would be a laugh.

…here is that episode…

…but I know Claudette, and she is very intelligent. She must know that the National Party have selected her so far down on the list that Aaron Gilmore was ranked above her for the perception of diversity rather than actually plan to have her participate. Their sudden desire to whisk her out of the limelight and urgently media train her gives proof to that.

Claudette could bring a whole new voice to National and articulate a Maori perspective National have attempted to reach out to in the past. As a lesbian Maori who knows the reality of poverty in her community, Claudette has the potential to be historical.

If she does one thing.

Cross the floor over MANAs ‘Feed the Kids’ Bill. She could earn far more status if she crossed the floor and allowed the Bill to go to first reading than just seeing out a year in Parliament.

The Bill won’t be voted on until July now and Claudette could use the time to step up for all those hungry children from the fringes who have no voice.

As a talkback host on Maori Radio, Claudette knows the realities of poverty, her sudden ascension to MP could be her chance to give those frustrations voice and make a stand that would earn her begrudging respect throughout the political spectrum.

She needs to ask herself, will National give her a higher list ranking or is she there for only 18 months, because if this is just luck with no second shot, crossing the floor on this Bill would give her a mana that a year and a half of toadying will never achieve for her.

I hope she goes there to make a change.