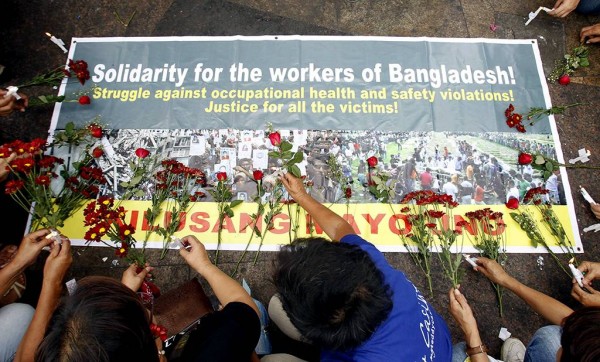 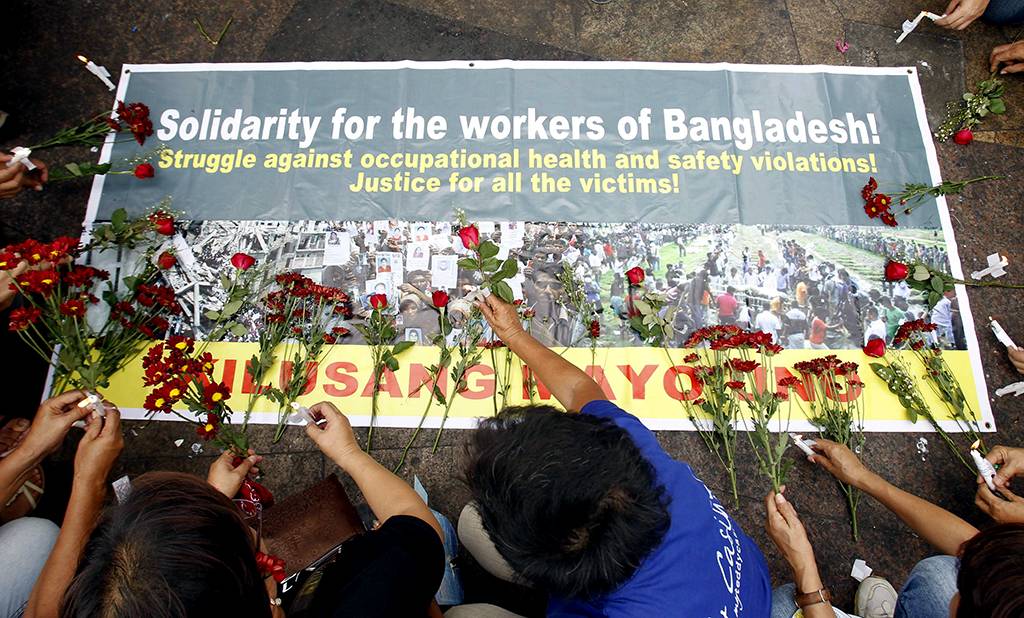 On 24 April Bangladesh witnessed its worst industrial accident when the Rana Plaza building near Dhaka collapsed killing 900 workers and injuring 2,500. Workers refused to work when cracks had appeared in the walls of the building a few days earlier but the owners producing clothes for western retailers forced the workers to continue working in what were lethal conditions. The workers were murdered to fill production orders.

The Bangladesh factory where 112 garment workers died in a fire on November 24 2012 should have been shut down months earlier. The fire department refused to renew the certification the factory required to continue operations. These workers were also murdered working on the front line of a supply chain run by global retailers sourcing fashion from the cheapest and most dangerous workplaces in the world.
The textile factory in Karachi, Pakistan in which nearly 300 workers burned to death on September 12, 2012 had only weeks before received the coveted Social Accountability International’s SA8000 certificate, indicating that it was in compliance with international standards on working conditions and safety standards.

Social auditing is no substitute for a strong unionized workforce which monitors and enforces safety standards every day the work is performed.

The Karachi fire and the other recent tragedies inevitably evoke references to the notorious fire at the Triangle Shirtwaist Company in New York, which in 1911, killed 146 garment workers. The doors at the Triangle factory, like the doors at Ali enterprises in Karachi, were locked. The bosses said it was on account of theft. The workers knew that it was to keep out union organizers.

Food safety lapses can kill consumers as happened in the China melamine scandal of 2008.

Thankfully the latest food safety crisis, the horsemeat scandal in Europe, has not resulted in any deaths.
But while food manufacturers across Europe are implementing DNA testing programs to discover which species of animals make up their meat ingredients, the root causes of serial food safety scandals continue to be ignored.

Governments and industry spokespeople will now occasionally acknowledge that multiple layers of outsourcing make it tough to monitor the food safety links in the supply chain but the nature of employment in that increasingly outsourced chain are deliberately ignored.

The lengthening supply chains rely on lengthening chains of exploited, vulnerable and precarious workers.
Protecting the workers who are guardians of food safety in their day to day tasks is even tougher when they work for a range of agencies and contractors.

For agricultural and food workers to fulfill their role in protecting public health and the public interest, they must have the right to organize.

The latest food scandal, like the murder of outsourced garment workers, should come as no surprise.

Ensuring food safety requires social protection and market regulation. Left to its own devices, the market concentrates resources and power and encourages a competitive downward spiral – on payments to suppliers, wages and workplace health and safety.

Social devastation is the real cost of cheap food. The right to safe food cannot be separated from rights for those who produce the world’s food. The intensification of work, the increasingly precarious nature of that work, dangerous and unhealthy workplaces and the absence of trade unions and collective bargaining are among the root causes of food safety risk.

A rights based approach to food production backed up by strong regulation and enforcement are the critical elements in an integrated approach to food safety, and it is these elements which are consistently overlooked by food companies, supermarkets and governments in their prescriptions to reduce risk after every predictable scandal. For safe food to be treated as the highest priority by growers, processors, manufacturers and consumers, the role played by workers in growing and processing this food must be considered an integral part of ensuring food safety.

Global supply chains and unregulated markets have concentrated wealth. The relentless pursuit of profit by reducing costs has created social devastation by destroying lives and livelihoods. Textile and food workers are often migrant workers, absent from their families, earning poverty wages working for an agency or subcontractor and frightened to speak up for fear of losing any livelihood.

The next time you consume garlic from China or put on a T-shirt manufactured in Bangladesh spare a thought for the workers. That is if you even know where the product or its ingredients come from. Without mandatory country of origin labeling of food in New Zealand we are in the dark over the source of many food ingredients.

Strengthening trade union rights and rolling back the role of precarious work in undermining union organization, workplace safety and product safety, must be at the centre of regulatory policy. Consumers have a right to identify the source of food ingredients through transparency of the supply chain.
In New Zealand the Government rejects mandatory country of origin labeling. The Government has just introduced legislation to weaken union rights and undermine collective bargaining. We know that this is a prescription for lower wages and less safe workplaces. Social devastation and increased misery is very poor policy.