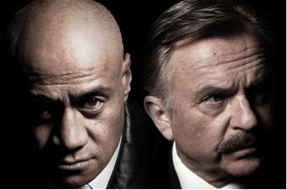 Local police dramas are a bit like a bobby on the beat: few and far between. The last one having been phased out some time after the traffic merger. ‘Shark in the Park’, the TVNZ police station drama from some murky time in the 90s, holds the strongest memories for me. Which are faint enough only to recall big hair, dodgy moustaches, with acting, plots and atmosphere that captured the mundane Wellington setting. It was saved by being similar enough to ‘The Bill’ to maybe have got a second season.

Temuera Morrison gave the bad boy detective a short run with ‘Ihaka’, I can vaguely remember, in a made for TV outing, but never developed into a series. Jay La’agaia’s vehicle, Street Legal, was deserving of the multiple series. It was cool. He was cool, like our version (now Australia’s version) of Blair Underwood. It walked a fine line with the NZ audience that gets upset at anything local that attempts to imitate Hollywood action excess. But it wasn’t a cop show exactly despite the police involvement, so it doesn’t count as a police drama. I struggle to recount anything recently.

Given the local production hiatus in the genre it was encouraging to find ‘Harry’ (TV3 Wednesday 9:30pm) has broken the drought. An hour long cop show with Oscar Kightley and Sam Neil doesn’t sound like a drama though does it? Maybe a re-make of ‘Chico and the Man’, or some odd couple comic scenario, but a crime drama as detectives working South Auckland homicide? That’s what they’ve done and by the looks of the first episode they may have cracked it. If it is a success it will probably be for the gritty portrayals and the local elements of the plot – as a drama – rather than as a standard cops and robbers show in particular.

It promises much and I was impressed with that first hour. The production itself, editing, camera etc., was excellent. So good I am not going to try to find out how much NZ On Air gave it because it will definitely be more money than the band of P-smoking Polynesian gangsters they are after will ever be able to heist.

It had brooding and mono-syllabic intensity from Kightley (Harry, the Samoan solo Dad with drink issues) and gruff remonstrations and moustache-twitching knowing looks from Sam Neil (representing every white male middle-aged detective). The dialogue had the sort of lively liberality of swearing that endears me to Australian television and cinema. Moments of rapid exchange are followed by scenes of little more than grunts. Naturalistic rather than the NZ and US tendencies for speeches and annoying forcedbackground information worked into the lines. The Aussies really have it over us in that respect, so this is a welcome improvement.

The story has written itself. Not the dynamics between Dad and teenage daughter after a crisis – which will be one major angle – but the crime story. The ‘armo’ is common to the Aussies, but not so much part of popular culture here. With the meth wave came fatal armos in South Auckland and it doesn’t look like they have to deviate very far from the real life carnage over the last ten years to find their core plot. It was convincing, for example, to see the head D, a real prick, demanding the case bust get the Herald’s front page. Teina Pora’s fit-up conviction by South Auckland detectives springs immediately to mind. I wonder how critical the show will be of police tactics generally? The Aussies once again have this as an unashamed part of their culture – are we ready for a taste of it?

The only sense of caution I have in an otherwise solid framework of good actors and script is Kightley. He’s the lead role. He’s best known for being a very unfunny comedian.The problem is the same drowsy, glazed appearance, slouching and mumbling, that I have associated with everything unfunny about him, might be able to pass as masculine brooding in ep1, but what is that hound dog, teen sad sack look going to seem by ep3 alone ep6. If he hasn’t upgraded to some serious pig/bully ultra-violence and lifted and turned his character then I will be disappointed. He is carrying the show and has to pull this off. So far, so hooked.