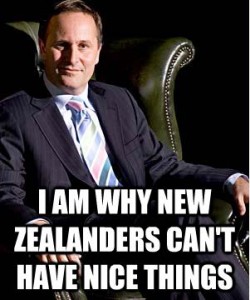 John Key has tried to water down his comments that Wellington is “dying” and now says it is a city under pressure.

He told Takapuna business leaders last week: “The reality is even Wellington is dying and we don’t know how to turn it around.

“All you have there is government, Victoria University and Weta Workshop.”

Key says “Wellington is a dying city” while he’s choking Auckland and crippling Christchurch. Is there any part of NZ that he’s not currently assaulting?

Talking a city into demise might be a means to force an amalgamation like the Super City but it ain’t going to win you friends and doesn’t seem all that smart as the Tourism Minister, but what is most interesting and what will be troubling National is that these comments came out at all.

As far as I can see, these are second hand comments coming to the media from a private business meeting with the well to do and white on the North Shore. Such meetings are held under Chatham House rules where the PM gets to mouth off in freedom without the information going anywhere near the media. Yet this has, and that is what’s interesting.

Perhaps the shine is coming off Key’s casual ‘I’m-comfortable-with-that’ routine in the eyes of people who know that there has to be a plan and not some bored teenager shrug of the shoulders.

What else is Mr Key saying to other business leaders in private and why aren’t the media privy to these meetings? Unless they are family events, I think the PM should always have media present when he’s speaking, just because it’s invite only shouldn’t mean a damned thing when he’s saying things like this to one part of NZ and speaking through the other side of his mouth with the rest of us.

Seeing as Mr Key has such a bad memory, we can’t trust him to remember what he’s said, necessitating a reliable narrative of what has been said being the Journalist.

While Mr Key is apologizing for saying that the Capital City is dying, the PM is rushing new spy powers through Parliament.

What Mr Key entertains with his left hand, he is stealing with his unnoticed right hand.