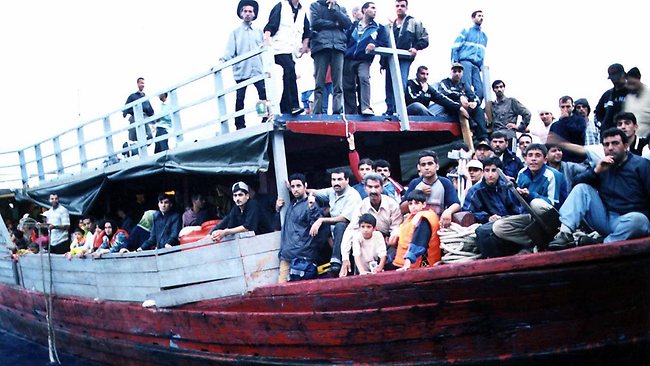 We are at a crossroad when it comes to our refugee policy and treatment of those seeking protection from persecution.  Why are we following Australia down a misguided path of viewing asylum seekers and refugees as an underclass less deserving of protection?

Most recently, of course, we have seen in New Zealand the proposed amendments to the Immigration Act, the so called “Mass Arrival Bill”.  Although impossible to confirm, it appears to have been drafted either by the National Party’s favourite consultant, Mr Warner Brothers, or more probably by folks in Canberra.

The changes would allow for the detention of asylum seekers arriving by way of an “unauthorised vessel” (although not unaccompanied minors – it is not sure where they would go, maybe they could get work on the new youth wage for Petrobras).  Less talked about, but potentially equally punitive, is the ban on these arrivals from being able to apply to sponsor their family members for at least three years.

The rhetoric – both in Australia and increasingly in New Zealand – is full of myths and mistruths.  Fuelled by balanced comments from such noted human rights advocates as Winston Peters (note to Colin Craig: this is sarcasm, Winston will get it, so ask him to clarify), there is very little in the debate reflecting anything tangible for the refugees themselves:  individuals and families fleeing to save their lives.

What remains is a convenient political picture painted of a cynical form of migration criminalised by the notion of people smuggling, but a picture far removed from reality and, ultimately, absent any empathy, compassion, or humanity.

Let’s take a brief look at two of the key myths out there.

MYTH 1: THE BOATS ARE COMING!

What we have seen is the arrival of two boats in Australia with asylum seekers claiming they wanted to go to New Zealand, one in Darwin and another in Western Australia (the Government has also implied intelligence suggesting other attempts, but just how intelligent is our intelligence?).  The last time I got out my National Geographic, however, both were on the other side of Australia with still a fair way to go and neither boat being able to continue its journey.

The truth is that any ability to circumnavigate from South East Asia to New Zealand would suggest a very serious abdication of Australia’s own border security, which is unlikely, or a sophisticated vessel able to somehow both avoid detection across a long journey and actually complete such a difficult journey.  Doesn’t sound like an Indonesian fishing boat to me.

Any arrival by boat would also not overwhelm our refugee processing system.  There is no literal or figurative wave of asylum seekers about to force themselves upon us.  Recently, UN’s refugee agency (the United Nations High Commissioner for Refugees, or UNHCR) reported that there were 1,401,435 registered Syrian refugees in the countries surrounding Syria as a result of that conflict.  Now, that’s a mass arrival!

Perhaps a less extreme example, but still instructive, is that to date in this calendar year over 30,000 asylum seekers have made the dangerous sea journey from Africa to Yemen.

Our situation just doesn’t compare.  It’s almost a desperate attempt to be one of the big boys to suggest that we have a refugee problem when simply one does not exist.

Frankly, this highly unlikely event of a “mass arrival” to New Zealand is being used as scaremongering to justify a punitive shift in policy by a government determined to further compound social inequality across the board.  If I am being charitable, the policy is misguided.  If I am being cynical, the policy is about National Party politicians wanting to be Australian.

Economic migrants are those looking for better work, education and other opportunities.  This is a criticism often lobbed at those on the boats who seek to come to Australia: “they are just coming for our jobs”.

To help with this, let’s remind ourselves of what it is to be a refugee.  The 1951 Refugee Convention defines a refugee as a person who is unable to return to her home country showing:

“…a well-founded fear of being persecuted for reasons of race, religion, nationality, political opinion or membership of a particular social group…”

This is a legal definition at international law now with over 60 years of academic writing and jurisprudence.

The point is that claiming refugee status is not some untested assertion.  For the fear to be “well-founded” requires an objective evidential basis to show why you cannot go back to your country.  This includes evidence beyond what the asylum seeker can present herself (such as government reports, news reporting, and other independent verification).

The concept “of being persecuted” has been decided by courts all over the world to amount to serious harm (eg, death, torture, sexual or gender based violence – serious human rights violations) demonstrative of a failure of state protection.  This is at the centre of the refugee framework.  Where your State will not protect you, the community of nations will.

What are known as the “Convention grounds” – “race, religion, nationality, political opinion or membership of a particular social group” – outline a requirement of a form of discrimination, that I fear for my life because I am a Roman Catholic.  That is, there must be a clear causative connection between the harm feared and one of the grounds.  (For those of you new to discrimination or…ahem…race relations, I would be happy to squash in a posting on the test at international law for discrimination in the future).

So, and through this very cursory overview, we can see that refugee status requires clear elements that must be satisfied.  It is not a vacuous concept.

This is important when we look at the statistics for boat arrivals in Australia and the ultimate acceptance rate:

(Source: Refugee Council of Australia citing the Australian Department of Immigration and Citizenship)

What this says to me is that an extremely high proportion of those arriving by boat in Australia are genuine refugees!  They meet the very strict criteria we outlined above.  They are not all economic migrants, far from it.  They have independent and objective evidence of fleeing a level of harm that is serious, that is due to a fundamental human rights violation, and is clearly discriminatory rising to the level of persecution.  They are not looking for work, they are trying to save their lives!

How can we not help such people?  Why do we further traumatize and criminalise these people through our policies of denial?  When did New Zealand become a nation of people who didn’t care?  If we do care, why do we let politicians in our name pursue such punitive measures?

These are just two of the myths.  Of course, there are many more and we can cover these in later postings if need be.  For now, let’s not fall for the rhetoric and remember that refugees are victims of serious trauma – our humanity demands we protect them.

Editor’s Note: This is Michael Timmins’ first post with The Daily Blog.