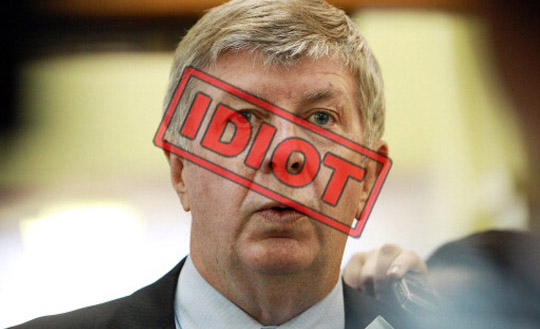 So the man who oversaw the leaky building fiasco wants to be Mayor? How dumb do National think Aucklanders are?

One good speech on gay marriage doesn’t forgive Williamson for a political life waging war on the poor and it sure as hell isn’t a green-light for National strategists to think progressive Auckland will suddenly suffer from political amnesia and vote for Maurice because he has a possible date on Ellen.

National claims Maurice could fix the broken relationship between Wellington and Auckland. If Maurice Williamson is the solution to fixing a broken relationship, I’d suggest that relationship had already fled the country and was living anonymously in Sydney to avoid child support payments

National wanted John Banks as SuperCity Mayor and they rammed the annexation of Auckland through Parliament under urgency so that Rodney Hide’s wet dream to sell off Auckland’s assets was all completed as easily as possible.

Sadly no one told South Aucklanders that they were supposed to shut up and let the wealthy white volk do what they wanted and came out in a historic vote and propelled Len Brown into the job.

Now Brown is in, National don’t want to hear a bloody thing he says, so their solution? Put Maurice Williamson in because his gay marriage speech might go down well in the leafy suburbs of Auckland.

Hello Maurice Williamson as Mayor – goodbye trains, busses and all of Aucklands assets. One good gay marriage speech doesn’t make him any good and National’s hungry desire to gut Auckland of its assets while allowing motorway uber alles gridlock to become the accepted norm.

Top 5 things Mayor Maurice will do to Auckland for National

5 – Under Mayor Maurice, SkyCity would be able to build 5 more convention centers for only an expansion of 5million more pokie machines into all kindergartens.

4 – Under Mayor Maurice, Auckland’s southern boundary will start in Taupo and Cape Reinga will become the northern gateway.

3 – Under Mayor Maurice, all trains will be crushed up to make the cement for more motorways in contracts handed out to their corporate donors in the construction industry.

2 – Under Mayor Maurice, the daily commute will be extended by 3 hours per day.

1 – Under Mayor Maurice, all Auckland assets will be painted rainbow when they are sold so that no one gets angry.