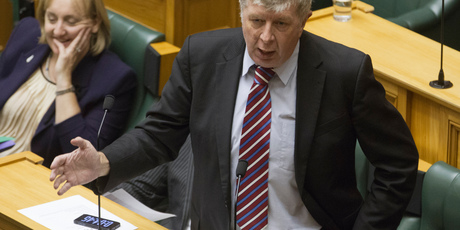 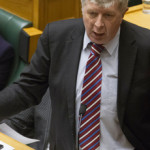 Maurice Williamson considers bid for Auckland mayoralty
Building and Construction Minister Maurice Williamson, who recently won international acclaim for his speech on the gay marriage bill, is considering running for Mayor of Auckland against Len Brown this year.

What made Maurice Williamson’s speech in support of marriage equality so special was the idea that such a right wing stormtrooper like Williamson could over come the petty bigotry of his own Party and show a flash of rainbow colored enlightenment.

It was surprising and it was nice. It doesn’t however greenlight Williamson as some sort of progressive vote for Auckland – far from it.

Maurice Williamson’s political life has been spent at war with Unions, attacking beneficiaries and the poor mixed with a deep hatred for public transport. To allow National to appoint their head kicker to the Super City would see Auckland city stripped of its assets as quickly as John Key can casually shrug a ‘I’m comfortable with that’ answer to a journalist.

Great speech on Marriage Equality – pity about your life long record attacking the weakest members of society for the benefit of the rich. One rainbow inspired moment doesn’t make for a hero parade.

No Maurice Williamson for Mayor of Auckland.