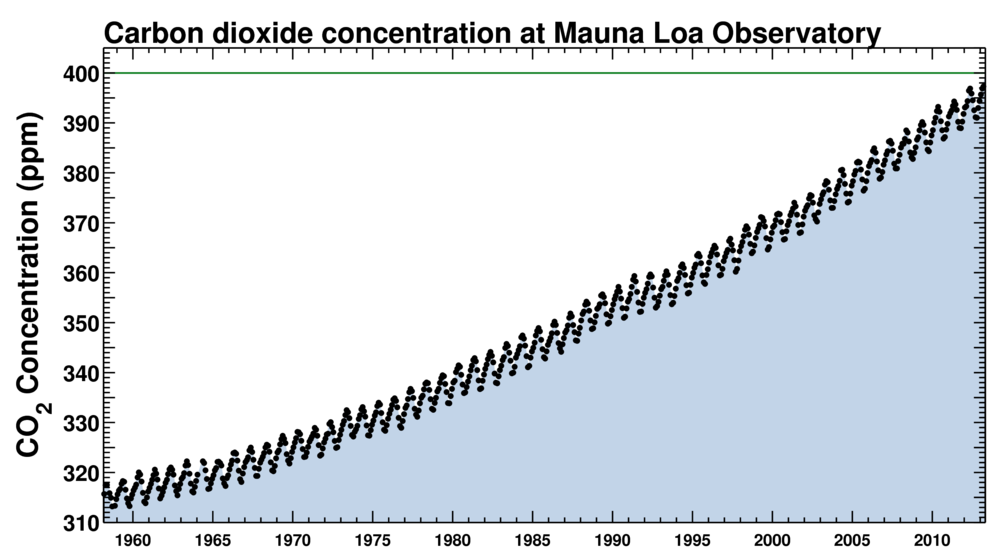 A carbon dioxide milestone approaches, but it’s a carbon millstone for our civilisation.

As I write, the amount of carbon dioxide in the atmosphere as measured at the Mauna Loa observatory in Hawaii stands at 399.50 parts per million. In the next few weeks that figure will tick past 400 parts per million, hover there briefly and then turn downwards as the summer growth of plants in the northern hemisphere extracts carbon from of the atmosphere. It’ll be a short respite. Some time in the next year or two the global annual average will blow past 400 ppm, because the world shows little appetite to reduce the use of fossil fuels.

The last time there was that much CO2 in the air — about three million years ago, during the Pliocene — the planet was 3ºC warmer than today and sea level was 25 metres higher. At the poles, average temperatures were at least 10ºC warmer. The Greenland ice sheet was much smaller than at present, and West Antarctica was a group of islands in an open ocean, not a great block of ice. Forests grew down to the shores of an Arctic Ocean that had no summer sea ice. It was a radically different planet to the one we inhabit, but it’s where our consumption of fossil fuels is taking us.

Pliocene climate is not something that crops up in many history lessons, but what it tells us needs to be much more widely appreciated. It shows where we are heading — where our apparently insatiable appetite for coal and oil is taking us: a drowned world. That simple fact needs to be shoved under the nose of anyone who argues that climate change isn’t happening, won’t be too bad, or will be something we can adapt to. It needs to be engraved on the hearts of the people negotiating international action on emissions, and the politicians legislating to do little or nothing.

Most importantly, the Pliocene tells us that aiming to limit global warming to just 2ºC by capping atmospheric carbon at 450 ppm is a chimera, an illusion — a short term possibility but a long term disaster. As I argued in my first post for The Daily Blog, there is an urgent need for the world to go beyond emissions reductions and start removing carbon from the atmosphere — and we need to start on the project now, not at some indeterminate future point when it might be politically expedient to do so.

Meanwhile, the American team on top of a Hawaiian volcano will continue recording the ups and down of carbon in the atmosphere, watching the Keeling Curve kicking upwards towards disaster. You can follow that trajectory in near real time here. In human terms it’s a slow-motion train crash. In the context of the history of our planet, it’s meteoric.