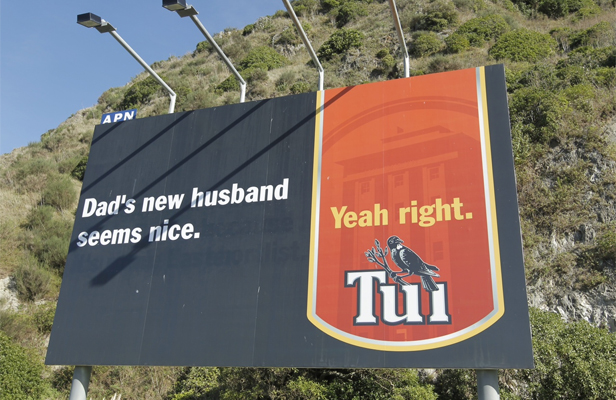 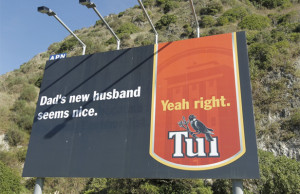 Tui has defended its latest billboard, which some have called insulting and homophobic, saying it was a ”topical spin” on a parent’s new partner.

Tui’s Facebook page has received comments about the advertisement since April 24, with some saying it is ”homophobic”, ”disgusting” and ”offensive”.

Tui’s homphobic new billboard ‘Dad’s new husband seems nice – yeah right’ finally creates something more tasteless than their beer. What a way to be on the wrong side of history? I bet the 1893 Tui billboard after the universal suffrage vote would’ve read ‘I like my woman out voting and away from kitchen – yeah right’

What a needless way to shit on something special.

Why couldn’t it have been ‘If gays can marry it’ll be the end of the earth – yeah right’?

Here is a list for Tui of who they should be attacking:

-Rich people should always be offended.
-Corporations should live in a constant state of offense.
-The Police shouldn’t go one month without being deeply offended.
-Baby boomers with multiple residential properties beyond the family home and a Bach should be regularly insulted.
-Wealthy farmers should be pissed off a couple of times a year.
-Anyone who sees ZB as a legitimate source of information should be poked constantly and viciously.
-Politicians shouldn’t be allowed to sleep.
-White South Africans.
-White pride clowns.

Here is a list of people that Tui might want to avoid if they don’t want to be seen as arseholes:

-Refugees.
-The poor.
-Beneficiaries.
-The disabled.
-Maori.
-Asian NZers.
-Women.
-Children in poverty.
-Homosexuals who have just won equality for the first time.

See. It’s not too hard. Shitting on the powerful is courageous and generates respect and is actually the wit Tui aims to brew.

Shitting on the weaker members of society for a laugh however is just cowardly.