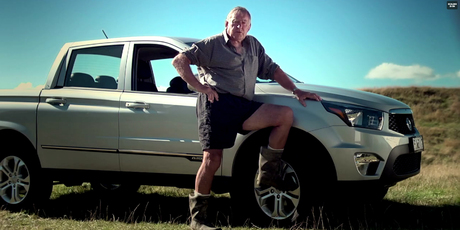 I think Colin Meads is a prostitute. Not just for going and playing in Apartheid South Africa for blood diamonds or slave gold or whatever it was in 1987 – when not coincidentally he says he last felt good according to his sex drug ad testimony on high rotate at Radio Live – and not merely is he an old harlot for queuing up for a mass knighthood of the undeserving and unremarkable when this National government resurrected the imperial-style honours system of yore, he’s also a little concubine’s hussy pants for the more common misdemeanor of commercial advertising endorsement with intent.

Like a stereotyped South Auckland after-dark street scene of lurid acts between desperate and fleeting partners, TV ads recently have featured a disturbingly wide cross-section of local celebrities engaged in the practice. Some ad breaks are little more than a parade of familiar faces of the past, opportunists of all stripes as well as younger victims of the trade. Real celebrities, the A listers, don’t do ads, full stop. The pimps are after them but they are in a position to say, for example, let that guy from Target do it instead.

The fact a brand seeks them and the fact they endorse is no indication of credibility either. Richard Long from One Network News knew as much about finance as Hanover Directors in the end and was damn lucky he was seen as the on-air husband to Judy Bailey, the ‘mother of the nation’, to have avoided prosecution. Kevin Milne could yet get carpet burns as Mike King got porkitis. Once the dumb mug found out how many sad eyes go into that yummy bacon and those meaty chops he was giving a toothy thumbs up to in the harmless appearing cooking ads, and once the dumb mug realised he wasn’t going to have his contract renewed and the free pork packs were cancelled he turned virrulently and publicly on the Pork Board. The campaign couldn’t have had a more terminal atmosphere if you ran Keith Quinn, Waka Nathan and Michael Jones’ individual death insurance ads with John Kirwan’s weird, surreal, anti-depression promo series in a loop.

And speaking of morbid All Blacks the oiks idolise, have you seen the ads from Pinetree – from old log head? One of those ads that the bald head guy has obviously put him up to? He stands next to a white plastic shitbox of a ute, assembled in lucky factory No.8 from sub factories across East Asia and designed by the looks of it on the the back of a crooked napkin at the canteen of the engineering workshop during smoko. It’s an ugly white munter of a thing. Probably made by the same East Asian concerns buying up the farmland in the background. But there’s log brain mumbling something unlikely as it is unintelligible about how great this thing is. The bald guy must just be there to feed him his deer crack because his dead pan slapstick routine is totally lost on TV. Is he adding or detracting? It would be useful to perhaps translate whatever Sir log head said from caveman into English so we can understand. That bald guy should try snorting the Meads mix like the legends do and leave the awkward stoner moments that don’t work to wankers like Newsboy.

And speaking of wankers… here’s a tip… if you find a smarmy, patronising arsehole around your house telling you how to penny-pinch on your power bill as if he was on a children’s show and you were 5 years old and he kept on appearing on all channels sometimes so that you’d strike him three times in a row because the Energy Conservation Authority – ironically one of the biggest electronic ad spends – has saturated coverage of this little prick everywhere… then do us all a favour and please electrocute him.

”Hey, [turn with blank dead eyes and force grin as speaking] did you know: it’s a solar-powered taser? So, [start walking purposefully around house keeping grin] it doesn’t matter how much the charge is, [turn stiffly, exchange fixed smiles] so let’s try it on max”

… And drop him like the sack he is. The most despised character on NZ television, surely. When this guy was a character on ‘The Almighty Johnsons’ his awful lecturing, hectoring, ads would appear at the time and ruin the illusion of the programme. Oh that’s right, you aren’t really the God, Thingawhosawhatsit, you’re that cretinous prick trying to tell me how to turn off a switch, like I should be taking notes so I don’t forget what a switch is and what off is.

Unfortunately he has an equally evil twin brother who has emerged recently on the evil Telecom account run by an evil ad agency who is determined to at least sink to the same imagined lowest level of audience as the energy ads: a sub 100 IQ with a general knowledge and language comprehension of a 5 year old, ie. the Quinn-Gilmour coefficient.

The Telecom creep is smoother than the energy creep because he too – surprise, surprise – is from TV land, TVNZ land of the clean cut chap. One of the U Youth channel DJ host persons from what little I’ve seen, that is to say been able to stand seeing. He knows his pitch better than energy twerp though and he’s being himself, Christiany type bland, but still himself. Energy dork however is intent to act it instead. He has settled the character as being one’s evangelical greenie friend. *ugh* The overlap with vegan in this scenario is about 90%+ which is about a 9 on the Anal-OCD scale, and crucially he can’t decide whether he’s channeling serious Mr Man from HM Government with important information, or whether he’s being a goofy, comic noddy. He ends up, if you have seen the series of ads, being neither the straight guy or the funny guy, but rather the guy people switch off.

Maybe that was the point? It would be less annoying if he wasn’t there at all and they just had a few 30 second notices read out by an old hand still in the market, a Dougal Stevenson or Philip Sherry, or the Briscoes lady or Vince bloody Martin (it doesn’t really matter as long as it’s not Suzanne Paul) that kindly asks people to turn their TV’s off just before something epically crap begins in the mid evening.