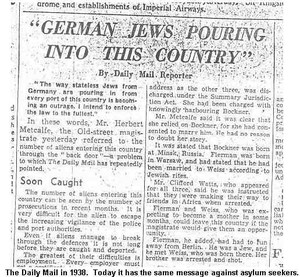 “The number of Jewish aliens entering this country through the ‘back door’” was “an outrage” and “a problem to which The Daily Mail has repeatedly pointed,” the article said.

Published the year before Germany invaded Poland and two years before the Holocaust officially began, the article described Britain’s intensified border security via port police, mass detention and deportation by the hundreds, and the struggles of Jewish people, essentially refugees, living “illegally” without work or social support in pre-war Britain.

At the time the attitude and policies applied in the UK, USA, Australia and New Zealand to exclude Jewish refugees directly contributed to the deaths of tens of thousands who were subsequently trapped under Nazi rule and sent to the extermination camps. The same attitudes to refugees can be heard today.

The policies being applied by the Australian and New Zealand governments today are not much better. Sending refugees from Sri Lanka, Afghanistan , Iraq, Iran back to their own countries has already resulted in many being killed.

New Zealand is a nation of immigrants. The first to arrive on its unpopulated shores were Maori from the Polynesian islands in the 13th Century. Half a millenium later a second wave of migration was underway – this time from the United Kingdom and Ireland.

The British government established control over New Zealand in a series of wars against the Maori in the 1840s and 1860s. Control over the country was given to the local wealthy landowners, bankers and manufacturers. At first only white males who owned property could vote. In 1867 Maori males could for four Maori seats in a parliament of 76 seats. At the time the Maori population was 50,000 compared to 250,00 Europeans. By 1890 all males could vote and in 1893 women won the right to vote. New Zealand was the first country to grant this right.

In the 1860s gold was discovered and tens of thousand of people flocked to New Zealand to make their fortune. This included for the first time a significant number of Chinese but they were denied any rights. In the 1870s the government encouraged people to migrate to New Zealand. The fares to New Zealand of 100,000 migrants were paid for by the government. Between 1871 and 1881 the population almost doubled from 267,000 to 501,000.

European only immigration to New Zealand was encouraged for the next 100 years. Until 1974 this included assisted passage for intending British migrants who were automatically granted permanent residence.

New Zealand followed a conscious “whites only” immigration policy. Until 1935 Asians were not allowed to become New Zealand citizens or get any welfare benefits – including benefits for widows, the blind, children or unemployed – even if they were born in New Zealand.

Following World War Two government officials restricted the entry of refugees – including Jewish victims of the Holocaust. In a 1948 letter Labour Prime Minister Peter Fraser said that the NZ team to select refugees would “be confidentially instructed to omit Jewish and Slav types as being incapable of full assimilation.” The head of the selection team explained in 1951 that they had “rejected those whose colouring would create too great a contrast” with white New Zealanders. The same policies applied before the war and only 1100 Jews were accepted into New Zealand in the 1930s. Many Jews were trapped in Europe and exterminated because countries like the USA, Australia and New Zealand turned them away.

The government’s Immigration Division summarised its policy in September 1966. It said immigration policy “is dictated by the relative ease with which different groups of people can be assimilated.” Because of that they favoured people from Western Europe and the United Kingdom. Some restrictions were placed people from Southern and Eastern Europe. “”The peoples of Asia and Africa, being of a culture alien both to that of Europeans and Polynesian New Zealanders, present more difficult problems of assimilation than any others…. These factors have caused us to place even stricter limitations from these countries than upon South Eastern Europeans.” The only exception was for a small window to be opened to some migrants from the Pacific to work in the factories of South Auckland.

But New Zealand’s population increased only slowly. The first million was reached in 1908, the second in 1952 and the third 21 years later in 1973. Population growth then slowed again with just over 375,000 added in the 18 years to 1991. In the late 1970s and 1980s more people left on a permanent or long term basis as arrived a new immigrants. Big business was dissatisfied and wanted a growing population to exploit and labour and consumers.

This produced a change in government policies towards new migrants. In 1984 the government abolished the official policy of preferring migrants from “traditional sources” – that is the white countries of Britain and Western Europe. In 1990 the government adopted a goal of a net 20,000 migrants each year. To achieve that goal it changed the method of selecting migrants. Applicants are now measured against a points system favouring younger people with professional or trade qualifications and work experience. People with money can also qualify under various business investment categories. The ability to speak English gives you more points but there is no official discrimination against non-white immigrants if they have the skills or the cash.

New Zealand now has about 23% of its population foreign born – one of the highest percentages in the world. 40% of the population of Auckland the largest city is foreign born. Around 10 percent of the population is now Asian – principally from China or India. Another 7% are from the Pacific Islands. But overall population growth as a consequence of net migration has been modest.

At the same time as the government has made it easier for a wider range of immigrants with the skills or cash to come here they have made it harder for anyone to stay who doesn’t have a permanent residence permit. Schools were forbidden to provide education. Universities were required to charge full fees. Hospitals demand payment. Unemployment and other welfare benefits are denied anyone without PR and even with it they are now forced to wait until two years before getting access to welfare. There have been massive increases in fees charged potential new migrants at all stages of the process. Legal aid has been refused those appealing against Immigration Department decisions.

Migration has radically changed the population of New Zealand. The anti-immigration populism of NZ First seems to have less traction. But attitudes to refugees is different. New Zealand’s official refugee quota is ridiculously small 750 – and hasn’t changed much in decades – despite New Zealand being involved in wars that have produced many of the refugees today. This compares to 20,000 in Australia. In fact it appears that New Zealand is being tougher and tougher on applicants for refugee status who arrive in New Zealand. New Zealand decided 271 refugee status claims in 2010/11. Refugee status was granted in 21 cases (8 percent) and declined in 250 cases (92 percent). The government is introducing policies allowing mass detention of any so-called “boat people”.

Progressive Kiwis need to stand up to the racist lies being told about refugees and welcome those who arrive here.