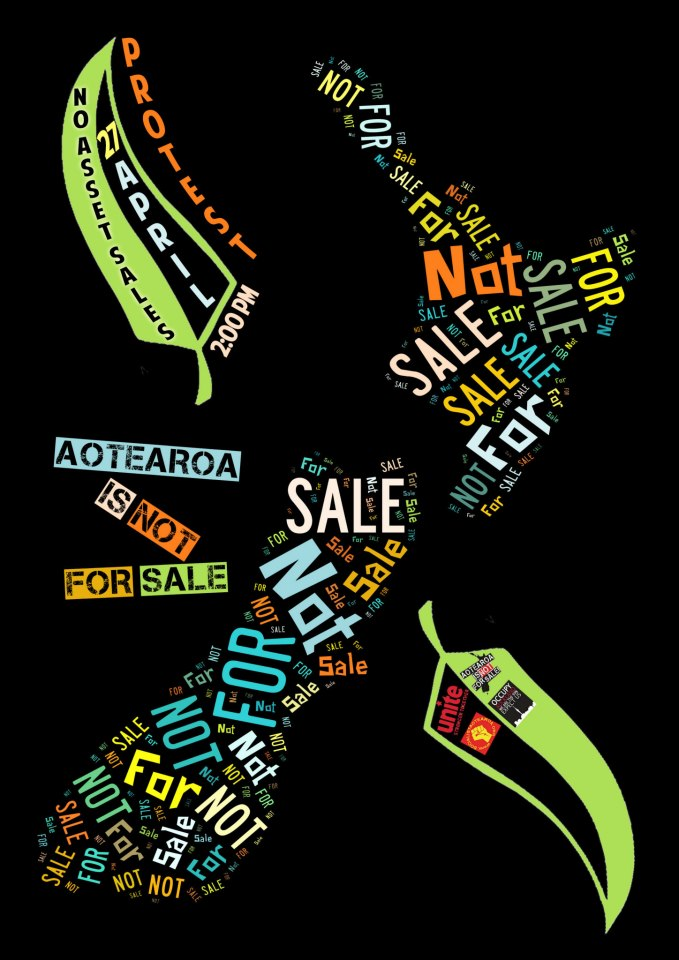 The National Day of Action against Asset sales deserves to be your first priority this Saturday. If you’re in Auckland that means Britomart at 2pm.

The campaign is organized by the Aotearoa is Not for Sale coalition which held a similar day last year which brought 7,000 onto Auckland’s Queen Street.

We need to do the same again.

It’s about showing determined resistance to the sale of community assets such as Mighty River Power and the on-going sale of state houses across the country. And it also needs to be about insisting that these assets are renationalized when the National/Act/Maori Party government is thrown out next year.

I’m not usually one for making political predictions but I think the community mood is strong with the sense that neo-liberalism has had its day and it’s time to move on. National’s bluff and bluster about “communism”, “economic sabotage” and similar idiocies in the wake of the Labour/Green proposal to intervene in the electricity market have fallen on deaf ears.

People are not buying those tired clichés. Anger at 15 years of brutal power price increases in a country which has a plentiful supply of the cheap electricity has finally found its target.

So while the sale of 49% of MRP looks likely to go ahead we need to ensure there is strong pressure on all parties in the next government to renationalize these assets. Anyone buying MRP shares needs to know this.

I’ll be marching on Saturday to give them that message.

If you are in Auckland be at Britomart at 2pm. If you are elsewhere get details at these links: