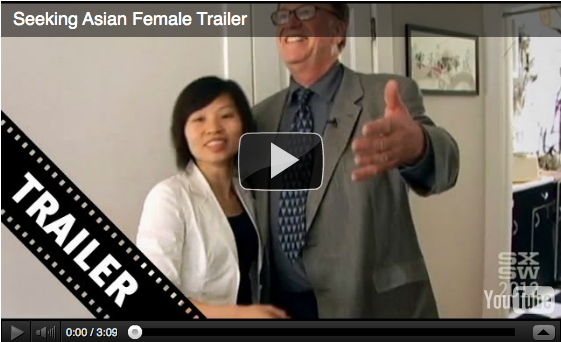 Director Dianne Lum set out to make ‘Seeking Asian Female’ with one objective in mind: to undermine the culture of ‘yellow fever’ that grips many men in America. Lum, an Asian-American woman, has grown increasingly frustrated in after being the subject of fetish-driven attention from men who are infatuated with the perceived stereotypical Asian female.

Lum found the perfect subject in Stephen, a 65-year old white American who is consumed by an obsession. Intending to bust apart his fascination which is based on erroneous assumptions, she instead finds herself in the middle of an unusual love story, investing more in her subjects than she expected.

Lum first meets Stephen when he is on the hunt for a young Asian woman. He devotes hours a day to emails and letters sent to and from China and Japan on the search for his future wife. Eventually, Stephen does find someone willing to move to America to marry him. Sandy, who is over 30 years younger than him, agrees to move from Shen Zhen to Stephen’s small apartment in San Francisco.

From the beginning, their relationship is bizarre. Sandy has such limited English that they basically have no ability to communicate with each other. There is a strong impression that what Stephen values about Sandy has no real basis in her as an individual, but what he believes she represents. He is an incredibly frustrating character in both his expectations of his wife and his reluctance to adapt to accommodate hers.

What becomes really interesting is the important place that Lum held in their relationship. Speaking Chinese and English, she was often called upon by the couple to translate – particularly during their arguments – more frequently as the story progressed. Lum maintains a sceptical view of the relationship throughout the film, but surprises herself by developing an attachment to both Sandy and Stephen and a desire that their relationship succeed.

Whatever you think about their marriage, one cannot help but be infected by Lum’s affection for her subjects. The film gives the viewer a greatly privileged position to see the intimate dynamics of an unconventional relationship, and on a wider scale reveals the compelling tensions that exist within the ‘mail order bride culture’. What began as a political endeavour ultimately centres on the contours of what it means to be human, in all its contradictions.