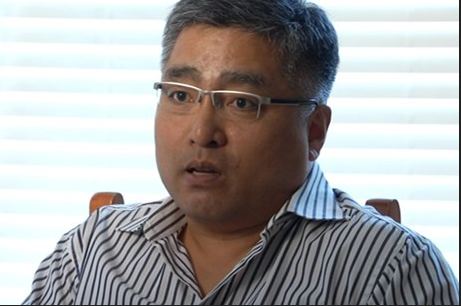 Propaganda is presented as a North Korean film on the use of propaganda in the West. The film was released by people purporting to be defectors from North Korea who asked translators to put in into English and put it on Youtube. In fact it was made by a director from Christchurch. Subsequently, the film it has been surrounded by controversies and conspiracies.

The film features a Korean ‘psychiatrist’ who goes through aspects of the western media and systematically criticises its use, arguing it aims to anaesthetise and control our collective consciousness. At this particular screening, the director and ‘psychiatrist’ came up to the stage for question time. It turned out that the director had written the script, and the psychiatrist was an actor, also from Christchurch.

Personally I found this ‘inverted mockumentary’ (as the director called it) quite aggravating. This largely wasn’t because of the content itself. Many of the criticisms of western media culture were entirely accurate. We are bombarded with advertising which create an endless pit of need, we are surrounded by a celebrity culture which undermines our everyday existence, and yes, most people would agree that George Bush was a bit of an idiot. However, I found that the use of the North Korean government as a false agent was actually quite dishonest and even cowardly.

If I had done a bit more reading around the film instead of glancing at the festival program, I would have known that this was in fact not a genuine piece of North Korean footage. Because I didn’t, however, I was able to enjoy the perspective that the filmmakers had intended. During the film I did begin to grow a little suspicious – some of the humorous references were a little too on point, the psychiatrist’s conclusions were a little too ‘pop psychology’, and by the end I was not entirely convinced that this was genuine. Aside from what criticism was easy to swallow – such as the rampant consumerism and the ever-expanding ego of celebrity – some of what was presented felt to me like conspiracy theories. Things like “most people now agree that 9-11 was a set up” (paraphrasing). The use of North Korea as an agent for these conclusions on western society felt to me like an attempt to evade having to defend them properly. I couldn’t help but have the feeling that the filmmakers were happy to pat themselves on the back for having done something clever, all the while having made some fairly sweaping claims without making it clear what they themselves believe or commit to. What did this director actually want to achieve?

What I found most interesting was that the whole time I was watching the psychiatrist attempt to rip western media to shreds I kept thinking something like “Yes there are so many flaws in our culture, but at least we are free to criticise it.” The one thing that I kept coming back to, something which sets us apart from a dictatorship, was the one thing that these filmmakers didn’t properly exercise. If their aim was to make a point about our media, why didn’t they just come out and make it? Instead I felt slightly manipulated, emerging without a clear sense that the director communicated his view to me frankly and honestly.

Perhaps I missed the point. But, unlike those audience members around me, who used the question time to congratulate the filmmaker and ask him about the controversy that has surrounded the film, I wanted to ask what did he want to actually say? I just didn’t get it. The film is still available on Youtube. I would encourage anyone to watch it and would be interested in what they have to say.