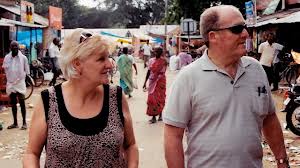 Said the note left in Ryan’s diary. 6 years before Missing In The Land Of Gods was filmed, Ryan walked out of the ashram he was staying in at 4am in the morning and his family has not heard from him since. He left behind all his belongings including his passport and a rather bemused friend with whom he had been traveling. Ryan’s parents Jock (they’re Australian) and Diane fly to India to try and track him down.

The documentary is an emotional roller coaster. I was on the verge of tears from the opening credits through to the closing ones. Perched on the edge of my seat, my hands in an involuntary prayer, pleading that they would find him. Jock and Diane receive phone calls from people who have seen their posters and think they’ve found him, and your heart soars. And then it crashes and the supposed Ryan is a homeless Indian man with Western features.

I’m not going to say if they find him or not. You have to go through that journey on your own. However, I will tell you that aside from feeling more feels than you’d expect from your average documentary, you will also get a great doco-tour of off-the-beaten-track India. Along the way, you meet black magic men, astrologers, police and locals found along the way who are touched by the story and want to help. You encounter Indian hospitality and bureaucracy, spirituality and poverty.

I haven’t felt such a strong connection with a story and it’s characters for a very long time. I want to hug Diane and Jock and then hop on a plane and search India myself. I promised my loved ones I would never leave an ashram at 4am without telling them where I was going. My father, who likes to contemplate becoming an ascetic said he couldn’t promise the same. Hmmmm.

Highly recommended but take tissues and a friend.