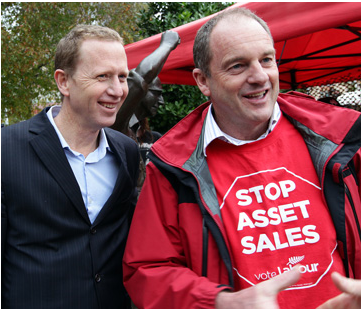 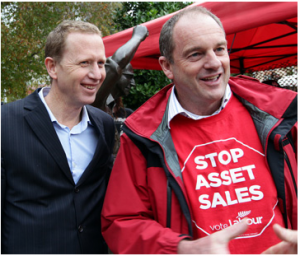 TODAY’S JOINT ANNOUNCEMENT by Labour and the Greens (see here and here) is better than good – it’s inspiring.

Not because it ticks every possible box on the vexed issues of energy generation and distribution in New Zealand – it doesn’t. What it does do, however, is introduce the voters to an alternative Centre-Left government with sufficient smarts and guts to offer real change.

I have to confess I’ve been profoundly sceptical of the Labour-Green claim that real change is possible through progressive regulation. My social-democratic instincts have always told me that state ownership and control of natural monopolies is the way to go. But, the cases presented by Labour and the Greens (more slickly and persuasively by the latter than the former, I have to say) are pretty convincing.

These reforms will work.

But there’s more to this announcement than the nuts-and-bolts of their proposed “single-buyer” of energy – “NZ Power”. Since the onset of Rogernomics in 1984, New Zealanders have become reform weary. We’ve become deeply cynical about Government promises of “improved service delivery” through “restructuring”. All that ever seems to happen is that jobs disappear, services are reduced and costs rise.

Ronald Reagan reckoned that: “The nine most terrifying words in the English language are: ‘I’m from the government and I’m here to help.’” After thirty years of neoliberal “reform”, New Zealanders could be forgiven for agreeing with him. How refreshing, therefore, to read a set of proposed changes that will create jobs, maintain services and lower costs.

And when Labour and the Greens say lower costs they’re talking about $230-$330 per year.

What I like about this part of the package is its progressivity. It works in precisely the opposite way to the regressive Goods & Services Tax.

If you’re wealthy, the chance to save $300 a year will elicit little more than a shrug of the shoulders. But if you’re not wealthy: if you’re a beneficiary, or a superannuitant, struggling to keep your house heated through the winter; then an annual saving of 300 bucks represents an additional $25 per month you’re now able to spend on something else.

Giving – not taking – is what Labour Governments used to do. I was beginning to think they’d forgotten how.

Meanwhile, the Greens just can’t wait to prove that anything Labour can do, they can do better!

This could be fun.

And now I’m asking myself: “Who should lead the Centre-Left into next year’s election?”

For the past twelve months I’ve been saying: “Not David Shearer!” Everything he’s said and done up to this point made me either wince with embarrassment or howl with rage. The things he should’ve (but didn’t) say and do produced similar reactions. A niggling suspicion took root in my mind that the guy was a neoliberal: that all his hesitations and misstatements were born of a determination to mask his true beliefs until it was too late. That were we heading for a replay of 1984?

Well, after today’s announcement, that analysis is beginning to look a little shaky. Unlike Labour’s poorly developed plan for affordable housing (offering houses that were neither affordable, nor available, to the Kiwis who needed them most) “NZ Power” is set to make a real and progressive difference to the lives of Labour’s people.

I’m willing to take that chance.

Because the very best solvent for factional strife in any progressive organisation is the imminent possibility of its members being able to make the world a better place. So much of the bitterness and rancour that has made the Labour Party so unhappy over the past eighteen months was born of the corrosive feelings of impotence and futility that beset every major Opposition party.

As a wise old Labour head once told me: “Yes, power corrupts. But what corrupts even more is powerlessness.” It can lead Opposition politicians to embrace all kinds of foolish and dangerous ideas – the worst of which is the false (but tempting) notion that if a party makes itself look as much like its competitor as possible, then its chances of re-election will be improved.

The policy announced today has dispelled such fears. The National Party cannot possibly embrace the Labour-Green policy because, by its very nature, it will bring down the potential value of the state-owned energy generators with a thump. Only a Labour-Green promise to renationalise any and every wholly or partially privatised power company could have had a more depressing effect on the National Government’s asset-sales programme.

I was there, on Massey University’s Albany campus, in 1998, when Helen Clark and Michael Cullen were escorted into the Alliance Conference by Jim Anderton and Sandra Lee. The cheers that greeted them, and the coalition pledge that followed Helen Clark’s speech, marked the turning point in both parties’ electoral fortunes. After that day, it was clear to everyone that Jenny Shipley’s National-led Government was a dead man walking.

“New Zealand too stands at that crossroads. Let everything we do lead to the spring of hope that is so long overdue.”

After today’s policy announcement, I will do nothing to blight the spring that it promises.

And so, to friend and foe alike, in Labour’s fractious caucus I say: