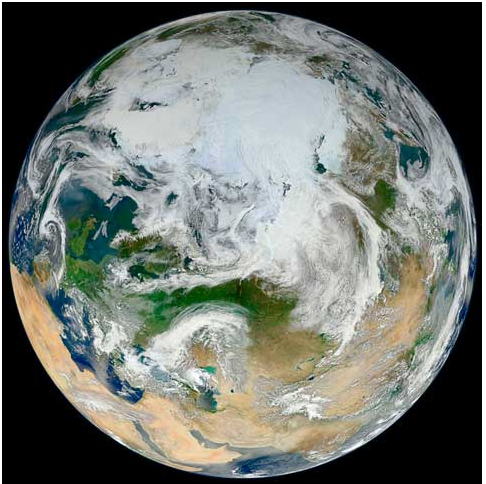 The sun is up in the Arctic, and summer melt season is getting under way. Time to start watching the ice disappear, because the future of our planet is being written in the far north.

Before the internet, I used to start my day by reading the newspaper as I ate my tea and toast. These days I get my morning news fix from the web — but I can access so much more than just news. I can look down on the planet from space, and see what’s happening in the Arctic. NASA satellite photographs stitched together in near real time show with wonderful clarity what’s happening to the great sheet of sea ice that covers the Arctic Ocean.

It might sound like a strange obsession, but there are plenty of people watching the Arctic with considerable concern, from the scientists who study the place in all its glorious diversity, to interested amateurs like me. It’s like watching a slow motion train wreck — fascinating and dreadful at the same time. Arctic sea ice cover has changed dramatically in the last decade as warming has accelerated in the far north. Thick old ice that used to cover the majority of the ocean and last all through summer has disappeared, replaced by thin ice that cracks and melts easily. Last year’s sea ice minimum set a new record, only half of the normal ice cover for the time of year. This year’s melt season is starting with a thin cover of new ice. It has already started cracking and moving weeks ahead of schedule.

Will this summer bring a new record low? It’s of more than academic concern, more than just something happening somewhere on the other side of the world. The ramifications of the ice melt extend well beyond the Arctic. As the ice disappears, weather patterns around the northern hemisphere are showing signs of change. The polar jet stream, a ribbon of high altitude winds that circles the planet and marks the boundary between warm and cold air, has been behaving oddly. Weather systems get “stuck”, lingering for long periods in one place instead of steadily moving from west to east. Europe’s snowy late winter and early spring and last summer’s US heatwave are examples of the kinds of weather extremes that result.

Research teams are beginning to unpick the mechanisms at work as the climate system responds to Arctic change, but the reason is easy to understand. Heat is accumulating in the Arctic, melting more and more ice. There is now much more open ocean in late summer and early winter than was the case only ten years ago. As that ocean refreezes every winter, huge amounts of heat are released to the atmosphere. The pattern of northern hemisphere weather movements is driven by the difference between warm air coming up fro the south and cold air coming down from the north. As the Arctic warms, that heat difference decreases, and weather patterns change.

That’s bad news for North America, Europe, Russia and China, but the effects extend right down into the tropics — and perhaps further south. One recent study that looked at the potential impacts of a planet with a warming north pole and a south pole that stays cold (Antarctica is big and cold, and expected to stay that way for the foreseeable future), suggested that tropical rainfall patterns would shift northward as the difference between the hemispheres grows. That could have significant impacts on areas in the southern hemisphere left to dry out as the rains shift north.

What’s going on in the Arctic is rapid climate change, and it’s happening now. It’s changing the weather that most of the world experiences. It’s the most important and most visible of the multitude of climate impacts we’re forcing on the planet, and it’s worth watching every day. Will this year set a new record summer low for sea ice? It’s too early to call, but one thing is certain. Northern hemisphere climate has already changed, and will continue to change in ways we’re only beginning to fathom.