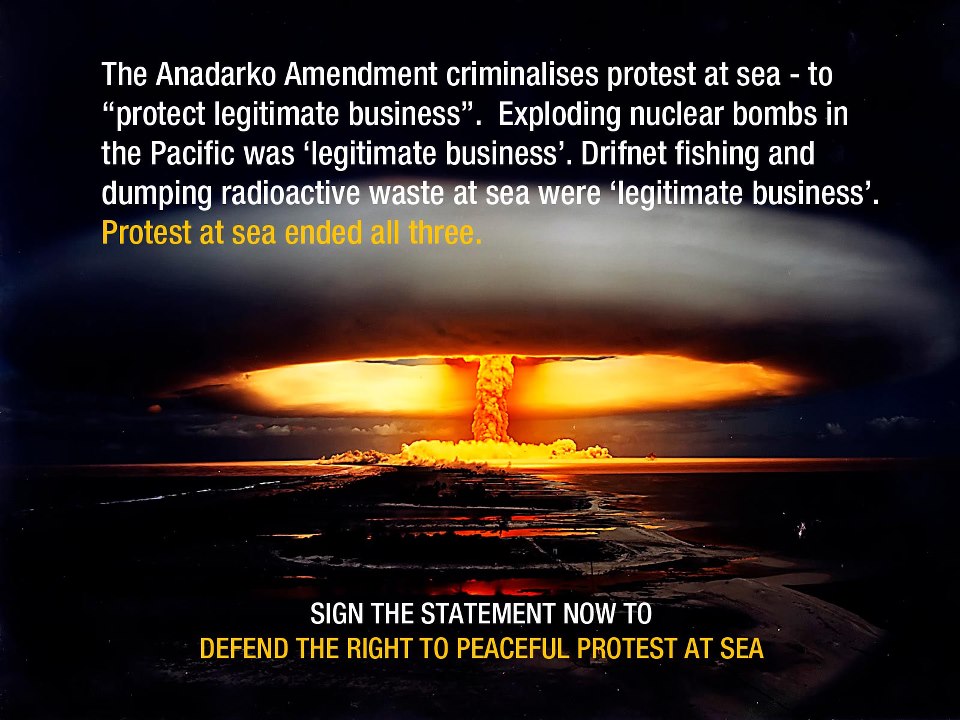 And so it passes without a whimper. National’s new law criminalizing Greenpeace and protests on the water for corporate big oil passed through Parliament last night as part of National’s blitzkrieg against civil liberties.

And what a blitzkrieg it has been.

National started by retrospectively legitimizing the NZ Police illegally spying on NZers with vast new search and surveillance powers that allow them to break into our homes and plant spy cameras with the barest of judicial oversights.

It continued with slick willy Simon ‘big-oil-have-rights-too’ Bridges and his law to allow the military to arrest NZers protesting against petroleum speculation and it will end with Key passing law to let the GCSB spy on NZ citizens.

It is no wonder that the National Party have stacked the Human Rights commission with cronies so that when the inevitable complaints that civil liberties are being breached, National have the numbers to rule in their favour.

Every day that passes under this Government we become less democratic and for National voters, that’s the way they like it. They have no interest in sharing power with other sections of society, as Nationals stealing of water rights in Christchurch can attest.

Better for National Party supporters to lock those segments wanting more from society up in the newly privatized prisons where they can slave away in forced labour camps.

Thankfully for National, with the threshold of public journalism being Seven Sharp, these issues can be quickly ignored before the next advert break.

New Zealand under Key has quickly become the land of the wrong uptight crowd.

Let’s hope history will be damning in its judgement of these pro corporate laws against protest. I hope Greenpeace live up to their promise to expect resistance.

Slick Willy Simon Bridges should never be allowed to live down what he’s done this week.