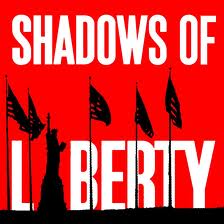 Shadows of Liberty looks at direct examples of corporations killing off the journalism from the media agencies they directly own or buy out.

Gasp in horror at CBS originally breaking the terrible brutality of how Nike appallingly treated their workers in foreign sweat shops only to have the story sink without sight once Nike bought the sponsorship of CBSs winter Olympics.

Yell angrily at the screen as it is revealed that CBS started investigating how the US Military accidentally shot down flight TWA 800 in 1997 only to have a piece of fabric that proved heavy metals that could only have come from a US missile were handed back to the FBI because CBS were owned by a large military contractor who feared the revelation would damage their future contracts.

Scream at the terrible story of how Gary Web was silenced by the mainstream media. He revealed how crack cocain was brought into the black communities in America as blow back from CIA operations in Nicaragua. The manner in which the msm killed his story off drove him to suicide.

The cherry on the top of this terrible litany of crimes against the fourth estate was the manner in which the corporate media falsely sold the case for the war in Iraq.

As the NZ corporate media attempt to set the parameters of regulating the blogs here in NZ, this is a must see documentary about their relationship with journalism and the horror corrosion of the values of speaking truth to power.

It screens today in Auckland – go see it.