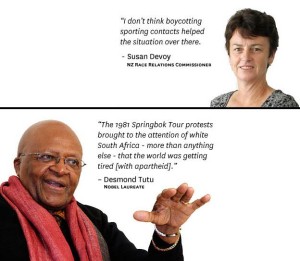 What does constitute a race relations issue worth commenting on these days?

Apparently the insulting remarks from visiting Dane MP Marie Krarup do not. The following media sensationalism which incited further vilification of Māori culture and heritage seemingly also does not. Then the Conservative Party Leader Colin Craig jumping on the insult bandwagon again failed to drum up any leadership from Race Relations Commissioner Susan Devoy.

There has been booming silence where there should have been some input from her given the damaging national conversation that was taking place. It is not that we should suppress what people think and say. It is about acknowledging that the media platform being used to debate the issues was destructive and without resolution. This approach negatively impacts on how we try to get along with each other. The former Race Relations Commissioner understood this about the media and as was the responsibility mandated to him, he would call the media to account and would build other healthier ways of engaging on these issues.

That mandate of the over $200k role of the Race Relations Commissioner is quite clear. At the very least the New Zealand public should expect that Devoy fronts up:
(a) to lead discussions of the Commission in relation to matters of race relations
(b) to provide advice and leadership on matters of race relation arising in the course of activities undertaken in the performance of the Commission’s functions, both when engaging in those activities and otherwise when consulted. (Section 15 Human Rights Act 1993)

These points are only the tip of the iceberg expectations that go with her role but on those alone she has failed miserably. At a time when we sorely need our highly paid and experienced human rights advocates to offer some true race relations work and visionary statements, there has been nothing.

Former Race Relations Commissioner Joris de Bres on many similar occasions displayed some clear leadership, balance and insight and in good time. For example here he was doing his job around Paul Holmes’ disparaging article last year on Waitangi Day… “The column was crudely expressed and included stereotypes many would have found offensive. For better or worse Paul Holmes is a key influencer of public opinion. I would hope that Mr Holmes realises that this uncommon privilege comes with the responsibility to not denigrate a whole sector of society.”

The key competencies outlined for the role require that the Race Relations Commissioner should also have:  -The ability to stimulate interest in, promote understanding of, and encourage action on race relations issues.
– The ability to interact effectively with the media to promote harmonious race relations.

Again here was an opportunity to even just gently dip her toes in her role and live up to those competencies. As Race Relations Commissioner the media are Devoy’s for the picking. With some vicious exchanges unleashed by Krarup’s comments a reasoned response would have been a great circuit break to the vitriol. Many New Zealanders were angered by the attack on an identity that the whole country should be proud of. Devoy could have offered some hope that she has an inkling of what to do in that office.

Instead her avoidance of issues makes it clear she cannot fulfill her duties to any standard let alone a $200k one. Along with a generous salary unlike any on the job training allowance we have ever seen – I am aware of how much up-skilling and educating she will need because of the obvious gap in her skills, knowledge and experience. This training will either come from the already skilled and experienced but lower paid staff around her OR she will need external training. Either way it is all an extra cost to this whole sham of an appointment.

Imagine a Race Relations Commissioner who could actually comment on any wave of overt racism happening in our media. The job of sorting out our chaotic race relations can never fall on the shoulders of any one organisation let alone a single Commissioner. However there is room to inspire in the doom of such ugly dialogue. One way to instill some balance is to affirm the positive bridge-building work that is happening in communities and across organisations to promote diversity. This could also be a time to reflect on those families raising strong, secure children who can embrace difference and have a healthy sense of belonging to Aotearoa. I do not want my children to grow up in a country that even tolerates such divisive attitudes like those of the racist supporters who love Devoy’s inaction right now, let alone encourages it under the guise of freedom of speech. It will be my failure if my children grow up needing to attack any group of people simply because their culture is different. I will be equally disappointed if my children stand by and let it happen to anyone else. The Race Relations Commissioner would do well do to exercise her freedom of speech in a more invigorating way than we have seen from others. In the meantime, how about we drop her salary to a fairer training allowance?

The New Zealand Herald on Saturday 13 April will feature an article on a poetry collection called Susan Stand Down. The poems come from a growing number of New Zealanders who recognised Minister Judith Collins’ appointment for the lame decision it is from the start. Ordinary people from all walks of life, some who have never written poetry in their life, have proactively sought to add their creative voice to this innovative protest. There are nearly 60 stunning pieces of poetry on a tumblr blog site and they keep rolling in. Please visit the tumblr site and keep an eye out for the Herald piece on it that will feature in the Arts and Culture column.