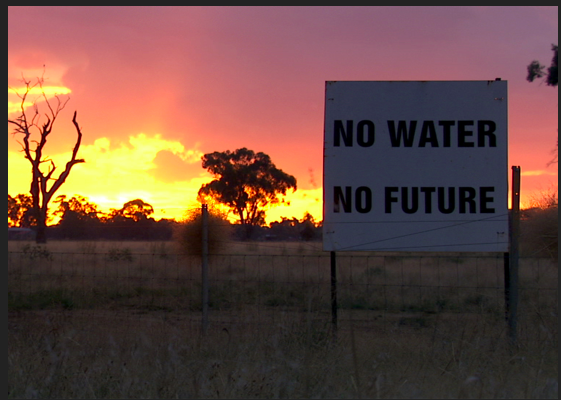 This documentary is so important, it should be mandatory 7pm screening on TVNZ every weekday on loop for a month. It would help get the word out about this vital issue of global water shortages and save thousands of minds from Seven Sharp.

Those NZers considering buying Mighty River Power shares need to watch this to see how worthless that investment will be in less than a decade.

Director Jessica Yu has woven together a beautifully crafted documentary that demands attention. From the clever opening spalshing water credits, Yu presents an impossible to refute critique of where the Wests water supplies will be in a decade and it is terribly sobering.

The apocalyptic scenes of 3rd world water desperation look zombie-esk and Yu’s examination of our wasteful relationship with water is as depressing as it is complex.

Again climate change is the issue. The super heated biosphere our pollution has charged means severe droughts will become the norm and highlights the necessity of napalming climate deniers who provide the political space for politicians to do nothing.

We see the impact of this new future on our own climate right now with the worst drought in 70 years.

In 4 years time, the Hover Dam will run dry and Las Vegas’s attempt to build a $3billion water pipeline taking water from a community far north of Vegas has locals there rallying to stop their water from being plundered.

Watching Australian farmers burst into tears and the suicide watch many rural communities are on punches home the realities of the global warming driven changes that are decimating Australia’s environment.

The destructive forces of pollution in water has lawyer Erin Brockovich back on the frontline in a heartbreaking scene where she explains to a room full of people that the poisoned water they have all been drinking is killing many of them. This pollution is highlighted by research into frogs where Atrazine is causing mass deformities and the vast pollution of waterways by the dairy industry in America has direct references back to NZs attempt to intensify farming on industrial levels.

With our own Government seizing democratic water rights in Christchurch for agricultural interests, this documentary is timely and necessary. Conservation is part of the solution but the political vision required to slow industries never ending thirst must also play a role.

Any New Zealander with an interest in our environment needs to see this documentary.