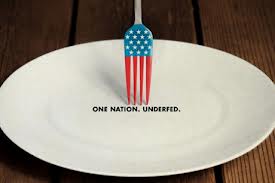 ‘if another country was doing this to our kids, we’d be at war’ -Jeff Bridges

So I knew American food was bad. I had heard stories of cinnamon scrolls the size of your head, covered in sauces and of many supermarkets only selling vegetables which are already washed, cut and packaged. I knew their soft drinks were too big and they use high fructose corn syrup in everything. But I clearly didn’t understand the scale of the problem.

A Place At The Table does a really excellent job of showing all the different elements of a really complicated crises. And it is a crisis. Because 30% of Americans suffer food insecurity. And that’s not just a crisis. It’s also nuts. When the richest nation on earth can be home to so much hunger, we’re clearly doing it wrong.

Because, as the film says, the problem is not a shortage of food. The problem is poverty. Well, actually it’s one of the many problems which are explored by this highly informative documentary, all of which essentially come down to poor policy.

I knew that there was massive agricultural subsidies in the US that for example meant that foods are more likely to be sweetened with high fructose corn syrup than Mexican sugar. But of course the impacts are much wider. The subsidies which were initially meant for small family farms in the Depression are now mainly claimed by large corporate farms with massive lobby powers. Fruit and vegetable growers who are mainly small family farms don’t have the same clout and so aren’t subsidized. So- expensive fruit and vegetable and cheap cheap cheap processed food. And when your food stamps are worth $3 a day, what are you going to spend your money on?

But the most horrific thing is watching corporate interests screw up attempts to make the system better. A proposal for $10 billion to be taken from the $170-odd billion in agricultural subsidies and spent on improving the school lunch program is shot down at the first committee stage. In the end the program gets $4.5 billion.

And where does it come from?

The documentary has a number of experts explaining complex issues clearly. So, you walk out feeling able to discuss what you’ve learnt, which is something that documentaries need to do to be effective.

It also gives the topic a human face. Mothers and fathers who are struggling to feed their children. All of whom are working, some of whom are working multiple jobs. Children describing how their tummies hurt at school when they run out of food.

A Place At The Table is highly recommended for a very clear analysis of an issue that is only going to become more and more relevant as the consequences start becoming more visible.