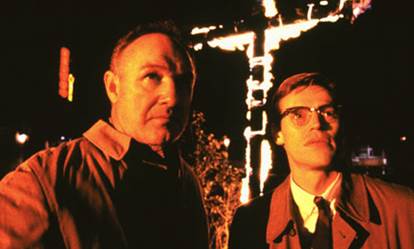 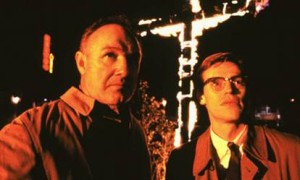 MISSISSIPPI BURNING (1988) is a gripping political thriller based loosely on the US Federal Bureau of Investigation’s fraught pursuit of the persons responsible for the June 1964 lynch-murder of three civil rights workers, Michael Schwerner, Andrew Goodman and James Chaney, in Neshoba County, Mississippi. The FBI investigation team never doubted that the local chapter of the Ku Klux Klan was responsible for the killings. Their challenge was to prove it.

Like last year’s much less uplifting Zero Dark Thirty, the director of Mississippi Burning argues that to successfully confront and defeat evil it is sometimes necessary to embrace its methods. Conducting the investigation “by the book” leaves the FBI agents not only empty-handed, but also makes them the object of the Klansmen’s contempt. To track down the killers and bring them to justice the agents are finally persuaded to play by the rules of a very different book – COINTELPRO.

The FBI’s counter-intelligence program was designed to, in its own words: “disrupt, misdirect, discredit, or otherwise neutralize” the activities of violently subversive political organisations.
Included in the COINTELPRO playlist were tactics designed to: create a negative public image for target groups (e.g. by surveiling activists, and then releasing negative personal information to the public); break down internal organization; create dissension between groups; restrict access to public resources; restrict the ability to organize protests; and restrict the ability of individuals to participate in group activities.

And, if Mississippi Burning is to be believed, involving its field agents in physical assault, kidnapping and torture.

In the film’s audience this provokes an acute moral dilemma. The COINTELPRO tactics produce indisputably positive results. Both in the movie and, apparently, in the real life 1964 investigation, they lead to the discovery of the victims’ bodies and the apprehension of the killers. But, to get those results, the agents responsible for upholding and enforcing the law have to break the law. (In the real life investigation the FBI even enlisted the aid of a known Mafioso “enforcer”!)

Historically, however, the FBI agents’ arguably heroic decision, in the Mississippi Burning case, to abandon legality in the name of justice, is a highly misleading depiction. Yes, the FBI did unleash COINTELPRO against the Klan, but for most of the programme’s fifteen year history (1956-1971) it was directed not at the racist Right, but at the revolutionary Left: The Communist Party of the USA, the Socialist Workers Party, civil rights groups, the anti-Vietnam war movement, student organisations, feminists and – most egregiously – the revolutionary nationalist Black Panther Party.

Ultimately, the outrageous (and, in the case of the Black Panthers, openly murderous) actions of COINTELPRO were exposed, and in 1971 the FBI Director, J. Edgar Hoover, was obliged to shut it down. Five years later, the United States Senate’s Select Committee to Study Governmental Operations with Respect to Intelligence Activities (commonly referred to as the “Church Committee” after its Chairman, Senator Frank Church of Idaho) reported that:

“The Committee finds that the domestic activities of the intelligence community at times violated specific statutory prohibitions and infringed the constitutional rights of American citizens. The legal questions involved in intelligence programs were often not considered. On other occasions, they were intentionally disregarded in the belief that because the programs served the ‘national security’ the law did not apply. While intelligence officers on occasion failed to disclose to their superiors programs which were illegal or of questionable legality, the Committee finds that the most serious breaches of duty were those of senior officials, who were responsible for controlling intelligence activities and generally failed to assure compliance with the law.”

This is not too far removed from Cabinet Secretary, Rebecca Kitteridge’s, Review of Compliance at the Government Communications Security Bureau, in which she examines the way its officers similarly “failed to assure compliance with the law”:

“The consequence of these developments is that the lawfulness of some of GCSB’s past assistance to domestic agencies is now called into question. In relation to NZSIS, the relevant period is between 1 April 2003, when the GCSB Act came into force, and 26 September 2012, when such assistance ceased. During that period GCSB provided 55 instances of assistance to NZSIS, which potentially involved 85 New Zealand citizens or permanent residents. In relation to the New Zealand Police, the relevant period is between 1 April 2003 and 1 January 2009, because (as already noted) every case of assistance to Police after that date has already been investigated by the Inspector-General of Intelligence and Security and determined to be lawful (with the exception of the case involving Mr Dotcom and his associate). During the relevant period, GCSB provided assistance to the Police in one instance, which potentially involved three New Zealand citizens or permanent residents.”

There is, however, a considerable difference between the tone of Ms Kitteridge’s Review and that of the Church Committee’s Final Report. In the former, we encounter the nervous and eager-to-exculpate vocabulary of a senior civil servant anxious to land as few serious blows upon the subject of her investigations as possible. The language of the Church Committee, by contrast, is charged with the moral outrage of its democratically elected authors.

It is the US Constitution’s strict separation of powers that makes a document like the Church Committee’s Final Report possible. The FBI is a part of the Executive Branch of the US Government and, therefore, subject to the scrutiny and statutory remediation of the Legislative Branch.

Would that it were so in New Zealand.

Exposed, almost accidentally, by judicial intervention in the extradition hearings of Kim Dotcom, the compliance failures of the GCSB have not been anything like as vulnerable to democratic redress as the excesses of COINTELPRO. If only New Zealanders were blessed with a legislature as aware of its duty to preserve, protect and defend the rights of the citizen as the US Congress was back in the 1970s.

Far from demanding a full-scale inquiry into the past actions of the New Zealand intelligence community, however, or setting in motion an investigation along the lines of the Church Committee hearings, our Parliament seems set to change the law which currently prohibits the GCSB from spying on New Zealanders. At the Prime Minister’s behest, what was illegal will be made legal – and the GCSB will receive ex post facto validation for the fifty-five potentially illegal interventions identified in Ms Kitteridge’s Review.

In Mississippi Burning, Agent Ward, the character played by Willem Defoe, physically restrains his partner, Agent Anderson, played by Gene Hackman, from going after a Klansman:

Ward: We’ll go after all of them. Together.
Anderson: You wouldn’t know how!
Ward: You’re going to ‘teach me’ how.
Anderson: You don’t have the GUTS!
Ward: Not only do I HAVE the guts I have the AUTHORITY!

In the drama currently unfolding in New Zealand, the agents’ debate about ends and means should be taking place on the floor of Parliament. With the GCSB and their political protectors playing the role of the Klan, and we, the people, supplying our representatives with the GUTS and the AUTHORITY.