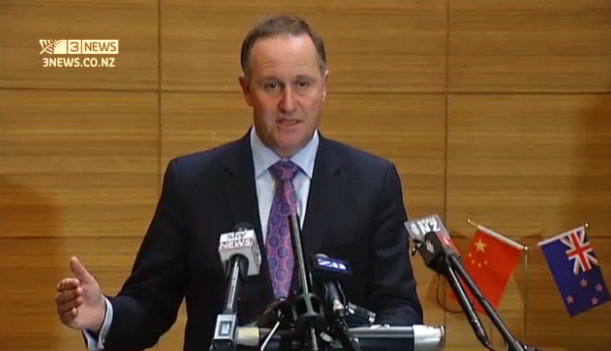 After being forced to publicly release the Kitteridge Report ahead of his schedule the Prime Minister is falling back on his ‘trust me, I’ll fix it’ strategy. But this falls far short of the mark. Here’s why.

From China, the Prime Minister changed his mind and instructed that the Kitteridge Report (click here to download) be released prior to his return. He did so after Dominion Post journalist Andrea Vance acquired and published details of the report’s findings and recommendations. She did this to serve the public interest.

Overnight the Prime Minister told journalists, on his return to New Zealand, he would: “Remedy the inadequacies of the GCSB Act” and added: “It is absolutely critical the GCSB has a clear legal framework to operate within.”

But there’s a major problem with this.

On the first point, in case the Prime Minister has not realised, it is not just the GCSB that has exhausted the public’s confidence over its illegal operations but also his irresponsible style of ministerial oversight.

As such, the Prime Minister is part of the GCSB’s problem and not part of the solution. And it must be said, half of the timeline spanning 2003 to 2012, where the 85 illegal offences against the GCSB Act were committed, was during John Key’s time in office, and where the GCSB and the DPMC had had five years to reach an understanding of what the law meant (when it stated that the GCSB cannot spy on New Zealand citizens nor permanent residents).

Secondly, what exactly does this Prime Minister mean by “It is absolutely critical the GCSB has a clear legal framework to operate within”?

By that statement this Prime Minister means he intends to make legal (retrospectively or otherwise) what the GCSB has been doing illegally. He stated at a press conference overnight in China that he believes the GCSB should be able to lawfully carry out surveillance on New Zealanders.

This retrospective altering of the law is why Green Party co-leader Russel Norman is stating the whole issue smacks of corruption.

Brief tangent: At risk of sounding trivial: What is next? Making a law where banks facing insolvency can drain the savings of trusting New Zealanders? Oh wait, that is on the legislative agenda. Well, I’m not sure about Hobsonville, but in some towns south of Auckland that is called daylight robbery.

Let’s look into the heart of the issue. What the Kitteridge Report lays out simply and comprehensively is that operationally the GCSB is in a shambles. Well meaning, or otherwise, it comes back to the same broad question: is this GCSB scandal due to incompetence or corruption? The official version would suggest incompetence. But is this justified?

Rebecca Kitteridge asserts that her report has resulted from a review of how the GCSB operates, that she did not have a mandate nor the resource to investigate and her activities were not those of an inquiry.

She has elevated a very important point, and one that needs to be addressed should the public’s confidence in the GCSB be acquired. That point underscores why a broad independent inquiry into the entire intelligence framework must be held.

Without an independent inquiry, an investigation will not be held to determine that crucial question: is this incompetence or corruption.

Firstly, the GCSB director Ian Fletcher has not yet adequately explained why after six months of realising/knowing that the GCSB illegally spied on Kim Dotcom, Megaupload, and associates, that he sought a Ministerial Certificate from the Prime Minister that suppressed any disclosure of the GCSB’s illegal activities relevant to Operation Debut.

Fletcher was given opportunity to explain this unanswered concern on last night’s Campbell Live programme. He fudged the issue, skirted the parameter, and knew he left a giant hole for inquiring minds to ponder. The public’s interest in this matter is beyond curiosity, it is concerned whether our authorities, supposedly one of the least corrupt in the world, sought unsuccessfully to cover up an illegality committed by themselves.

Fletcher failed to satisfy on these points.

Remember that Ministerial Certificate was presented one week after Detective Inspector Grant Wormald denied in the High Court that any other agency other than the Police took part in surveillance of Kim Dotcom and his associates.

The timeline is central to providing context to this question. We have the affidavits, we have the High Court transcripts, but without an independent inquiry, answers to the questions; was there a cover-up or was it coincidence, will remain elusive.

As it stands now, it is reasonable for the public to assume there was an attempt to cover this whole issue up. And it is difficult to avoid coming to the opinion that corruption was in play on this act – corruption that involved the GCSB, the Police, the DPMC (Department of Prime Minister and Cabinet) and the Prime Minister’s office. But the Government and the public deserves to be heard on this matter, it is as they say important for justice to be seen to be done.

The opposition parties, Labour, Greens, New Zealand First and Mana are correct: an inquiry must be held. It must in part reveal why the GCSB and Police waited until the Prime Minister John Key was out of the country before approaching acting Prime Minister Bill English to sign the suppression order and why Bill English did not inform John Key that he had indeed signed it.

It is this style of mistake and misadventure that erodes the public’s confidence in the GCSB and why the Prime Minister and his departments must permit an investigative independent inquiry to be held.

Political scientist Bryce Edwards, while initially giving the Prime Minister the benefit of the doubt, has grown concerned. On 3News’ Firstline this morning he said: “The Prime Minister himself is the minister in charge of this area, and it just will keep reminding the public of the whole scandal over the appointment of Ian Fletcher and the cover-up of that by John Key in Parliament and to the media last week.”

Indeed, the Prime Minister is just too close to this scandal to avoid being involved. His defences, if true, should be asserted by an independently positioned person who has been resourced to investigate and found to be true.

Clearly, such an inquiry would need to be led by an individual who enjoys the confidence of the New Zealand public, who is outside the umbrella of the involved agencies, units, departments and ministries.

That person would need to understand law, have judicial experience, be committed to ensuring New Zealand’s national and public interest is honoured while ensuring our right to security and liberty is achieved.

Such a person would need to have experience in constitutional affairs and understand how important the executive government, legislature, and judiciary are to a progressive democracy.

Such a person would be the Right Honourable Sir Anand Satyanand, former Governor General of New Zealand.

While the following list is not an attempt to develop terms of reference, it is a sketch of some vital aspects that must be investigated and satisfactorily answered.

And we have to say, if the Prime Minister put his show to the side for a moment, and had the courage to apply his conviction to the public interest, he would immediately announce an investigative independent inquiry be held into:

But the inquiry must also investigate:

The Kitteridge Report is a document displaying the excellence and quality of some of our top public servants. Rebecca Kitteridge is highly respected within and beyond her DPMC duties. She has served New Zealand well with her review. But by her own summaries Rebecca Kitteridge alludes to a need for an investigative inquiry.

As Kitteridge states in her report:

That revelation is clear; Rebecca Kitteridge has reviewed the GCSB and asserts that a further investigation is required to get to the bottom of it.

Having assurances from John Key that he will fix the GCSB, just does not wash. And certainly, changing the law to make what the GCSB was doing illegally, legal, is verging on the corrupt.

Again, John Key has shown, as Prime Minister he is part of the problem, he is inside the mess, he is involved even if through only incompetency. But he has shown he is not part of the solution.

At the end of this show, something progressive could emerge, widespread reform of the intelligence apparatus could result, and New Zealand could return to being the once proud independent nation that it once was.

But for that to occur, we need facts, an investigation, and solutions so this mess can never happen again.

Other Posts in this series: