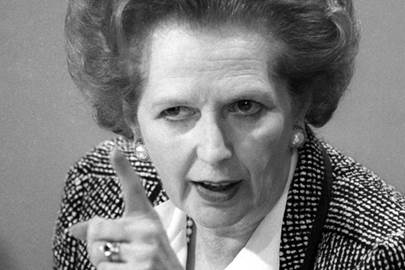 THE FALL AND RISE of Reginald Perrin a novel by the British writer, David Nobbs, was published in 1975. A year later it was adapted for television and became a BBC sitcom starring Leonard Rossiter. Three series of the wildly popular programme were produced, the last of them screening in 1979.

What made TFARORP so popular was its satirical portrayal of the lives of middle-class middle-managers in 1970s Britain. Perrin’s eccentric personality is the product of Britain’s thoroughly domesticated post-war capitalism. Life at Sunshine Desserts is so utterly devoid of challenge or meaning that to compensate Perrin loses himself in his own, increasingly bizarre, inner life. Eventually, he becomes so desperate that he “disappears” himself and returns, incognito, to Climthorpe as someone entirely new.

Interestingly, TFARORP ‘s run as a popular cultural artefact coincided almost exactly with the four years Margaret Thatcher spent as Leader of the British Opposition. She was elected to replace the hapless Conservative Party leader, Edward Heath, in 1975 and became Prime Minister in May of 1979.

No one hated the absurd and ineffectual Britain satirised by David Nobbs more fiercely than Margaret Thatcher. The Britain of nationalised railways that never ran on time; the Britain of shop-stewards, strikes and shoddy workmanship; the Britain run by pompous ignoramuses like “CJ” – Reggie Perrin’s insufferable boss.

Thatcher empathised with Britain’s Reginald Perrins because, in many ways she was one of them. A grocer’s daughter from Grantham: the intelligent, ambitious product of England’s abstemious and hard-working lower-middle-class.

Thatcher was always acutely aware of the distance separating her own from the other classes of Britain. Not for her the coarse collectivism and strong-armed solidarity of the British working-class. Nor was she ever much impressed by the snobbish gentility of the professional middle class. For inherited wealth and the aristocratic illusions it fostered she had nothing but contempt. The qualities Thatcher most respected were hard work and enterprise. As far as she was concerned it wasn’t the meek, but the industrious, who should inherit the earth.

Like Perrin, Thatcher wanted a new beginning. But for her personal re-invention was not enough; resurrection needed to be on a national scale. The ridiculous Britain of Sunshine Desserts, with its union-dominated shop-floor, it’s incompetent CEO and its grossly under-utilised and poorly rewarded middle managers would have to fall. So that, in its place, a new, striving, energetic, innovative, productive and above all, disciplined, Britain – could rise.

And discipline came only from the market. Thatcher was, after all, a grocer’s daughter. Buying and selling was a skill individuals either possessed, and prospered; or lacked, and fell into the black hole of poverty.

Thatcher’s world contained only two categories: market-literate wheat and market-illiterate chaff. And the best way to sort them out was to toss them up into the air over and over again until the chaff was carried away by the wind and only the wheat remained.

It is fitting that TFARORP came to an end in 1979. Nobbs’s characters had mocked Labour’s Britain and made fun its many shortcomings. But the humour was always affectionate and forgiving – a celebration of the Heath Robinson implausibility of so many British institutions.

In Thatcher’s eyes, however, that was the problem. She despised her compatriots’ almost infinite capacity to “make do” with what they were given. The nation had fallen into bad habits. The British people had forgotten they once inhabited a place called “Great” Britain. Tragically, seduced by Labour’s socialists, they’d rejected their glorious past – and had chosen, instead, the expensive comforters of the character-sapping Welfare State.

That was going to change.

Because, as things turned out, the laughter prompted by TFARORP had always possessed a bitter edge. Millions of Britain’s upwardly-mobile, lower-middle-class, middle-managers shared Thatcher’s impatience with both the born-to-rule complacency of their superiors and the dangerously inflated expectations of their inferiors.

At the gates of the Eighties, the Conservative Party’s first female leader found herself joined by an angry army of feral Reggie Perrins.

They just couldn’t wait to burn their own, unbearable, personal versions of Sunshine Desserts right down to the ground – and erect in their place a Britain fit for the heroine of middle-managers everywhere to live in.