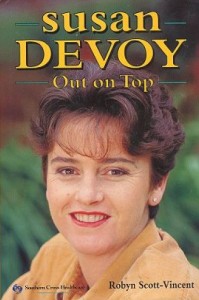 The Listener has done some investigation into our new Race Relations Commissioner’s past and it is far uglier than any of us expected.

From her own autobiography, Susan explains that the only reason why she didn’t play apartheid South Africa was because it might hurt her reputation and damage her future earnings…

Many girls would head to the sunshine circuit in South Africa where tournament organisers were renowned for their hospitality and good times.

It could well have been called the goldmine circuit. There, in my early days anyhow, the biggest sums of money were to be made. It is one place, however, that I never visited. I couldn’t afford to, politically speaking of course. The squash association didn’t want me to go, because they had no idea what the repercussions would be. HART (Halt All Racist Tours) was very active in New Zealand in those days, and the anti-apartheid feeling so strong that any attempt to play there would have become a big issue. We knew I’d be blacklisted and the media coverage could damage my reputation in this country.

As an individual, I would have been singled out. It would have been remembered and there was the chance my sponsors may have pulled out to avoid adverse publicity as well. Furthermore, my Sports Foundation grant was given with the unwritten understanding that, if at all possible, I would avoid sporting contact with South Africa. The offers were incredibly attractive, however, and it took some strength to hang back, watching, while others went over and took advantage of the situation.

There was talk of being able to make upwards of $100,000 for a six to eight week trip. In those days that was big money, especially since it was also all-expenses-paid and absolutely the best of everything while you were there. Each year [husband] John and I would sit down and write out the pros and cons, trying to decide whether or not I should go. The cons always came out on top. As threatened by the United Nations, the girls who did go to South Africa would be put on a blacklist. It was seen as a bit of a joke, however, because all they had to do was write a letter saying they would never do it again – then they’d go back the next year. The English girls never had any trouble, the Aussies didn’t seem to worry, but as a Kiwi, and number one, it would have been seen as more significant had I played there.

It would be easy to say it was political convictions that stopped me, but that just isn’t true. I do not condone apartheid, but I don’t think boycotting sporting contacts helped the situation over there. If it was going to help, I could have seen the justification in it. As it was, people simply found ways of getting around the ban.

The girls always came back with such wonderful tales of the cities they visited – Johannesburg, Capetown, Pretoria and Durban. It was considered quite a challenge to play there, because of the altitude. It is a country I would really love to have visited and I felt we sportspeople were the scapegoats.

…while the Government are scrambling to explain how they allowed John Key to appoint his mate to the Director of the GCSB, perhaps we could also ask how on earth Judith Collins appointed a squash player for Race Relations Commissioner whose only reason not to play apartheid South Africa was fear of financial repercussions.

If you thought Devoy was an inappropriate choice before, knowing her political convictions for racial equality were outweighed by her desire to make money demands she do the honorable thing and resign.