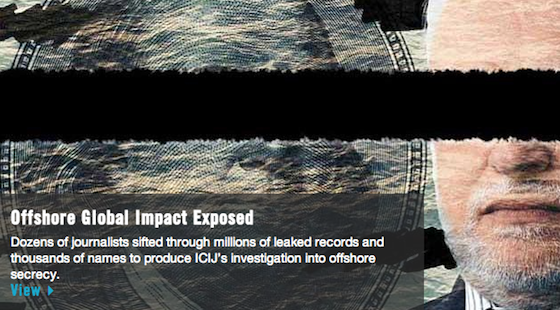 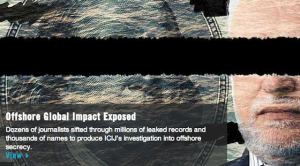 Nicky Hager and four other internationally acclaimed investigative journalists have today published a comprehensive body of work that unpicks the offshore money maze.

The investigation, which I understand has consumed around 12 months of investigative work, unearths a labyrinth of covert companies, bank accounts, blind trusts and assets designed as depositories where the rich, the powerful, the famous, and corrupt can hide away their profits.

The investigation presents how some of the world’s top banks have provided a shelter for money launderers.

The work was published today on the International Consortium of Investigative Journalists site www.icij.org.

It outs a significant number of leaders, politicians, business people from an array of countries including Fiji, Azerbaijan, Georgia, Russia (where Owners of corporations registered in “British Virgin Islands include top managers of Russian state-controlled giants”), France, Canada, USA, Pakistan, the Philippines, Thailand, Mongolia (a Nicky Hager report that unearths how the “Deputy speaker of Mongolia’s Parliament admits he had $1 million Swiss account..”), South Africa/Zimbabwe, and states:

“Many of the world’s top’s banks – including UBS, Clariden and Deutsche Bank – have aggressively worked to provide their customers with secrecy-cloaked companies in the British Virgin Islands and other offshore hideaways.

“A well-paid industry of accountants, middlemen and other operatives has helped offshore patrons shroud their identities and business interests, providing shelter in many cases to money laundering or other misconduct.”

The investigation is (as would be expected) a thorough in-depth account of where the money comes from and what it is used for. The Full Coverage section delves deep into a dangerous world of tax havens and crooks, into Ponzi schemes and hideaways where money is laundered. It reveals how even a Canadian senator’s husband has been found to have shifted money into offshore tax havens. And it unearths how the Son-in-law of Burma’s former dictator Ne Win and his family had accumulated massive wealth through forestry and fisheries industries, and how the son in law is a shareholder in companies registered in the British Virgin Islands.

The team of investigative journalists have revealed how a “number of so-called nominee directors of companies registered in the British Virgin Islands (BVI) have connections to military or intelligence activities…” And also “Companies making use of offshore secrecy include firms that supplied surveillance software used by repressive regimes. (See: Nominee Directors Linked To Intelligence Military.)

The work also details how Post Soviet billionaires have invaded the UK, via the British Virgin Islands.

And the investigation alleges that Fiji’s Fred Marafono  was a former British SAS officer who “was involved in security work and diamond mining during the Sierra Leone civil war.” The report states Marafono had offshore business as a “Director of Hinterland Mining Brokers Limited (1997-2000) in the Cook Islands.” It notes that Marafono passed away on March 27, 2013; and that “earlier attempts to reach him for comment were unsuccessful”.

Also check out how Australia was also investigated, and where journalist Gerard Ryle’s investigation Inside the shell: Drugs, arms and tax scams alleges how “Arms deals between North Korea and Iran, money-laundering by Mexican drug lords, and Russia’s largest tax fraud: the common element is a 68-year-old Queensland businessman, Geoffrey Taylor”.

The investigation also presents graphs that data-mine the volumes of information.

See Interactive: Gunter Sachs’s Offshore Network; and Interactive: Stash Your Cash; and We Reveal Who’s Buying Up In Britain; also a video: How To Dodge Tax.