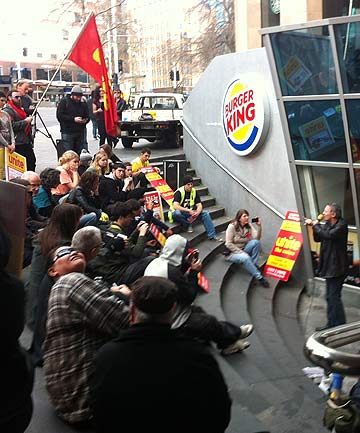 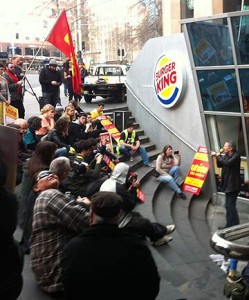 Immigration New Zealand has toughened up on work visa requirements in the fast food industry and requirements needed to progress to permanent residence.

Migrant workers in the industry have invested tens of thousands of dollars doing courses in “Hospitality”, “Management”, etc in order to qualify for work visas after graduation that allow them to train to the point that they could become “managers”. Until the recent changes managers could qualify for PR.
Hundreds of workers in the industry today have spent 2-5 years studying and then working for companies in the fast food and hospitality sectors with the ultimate goal being PR. They would not have come to NZ at all without that possibility.

Often these workers have been used and abused by New Zealand employers because they were totally dependent on the company for their visa and therefore felt compelled to do everything possible to please their managers and employers in the hope they will be promoted. This meant they felt unable to enforce some of their legal rights, including breaks, joining a union, being paid for all hours worked.

Removing the final rung in the ladder (PR) means these workers feel they have been ripped off by the government and employers and have wasted years of their lives and thousands of dollars – often doing jobs they would never have thought of doing in their home countries – even for less pay than they would have got at home as well.

At the same time it appears that Immigration New Zealand is making it more difficult to get shorter term work visas – with each promotion in a company being deemed a new job requiring a new visa. What used to be two-year visas are being reduced to six months.

These changes have also made it difficult for migrant workers to get promotion. The companies are thinking it is a waste of time training and promoting a migrant worker if they won’t be able to stay longer term.
Companies in fast food and hospitality are against the changes Immigration NZ has made and argue that they genuinely cannot find workers in New Zealand to do these jobs.

Unite Union does not accept this argument. Companies that operate in the free market and want to use the rules of the free market should also accept that the market may dictate a pay rise to attract the labour and skill required.

What is true is that it is unlikely that a kiwi-born worker or permanent resident with the skills necessary to run a 24 hour a day 7 day a week business with 50 staff and a turnover of several million dollars or more would do it for $40,000 per year.

It is our understanding that an average managers wage has declined from around $60,000 to around $40,000 in real terms in the industry over the past few decades.

The companies have been able to reduce the average real wage because they have been able to use skilled migrant labour. These workers are employed as managers on salaried contracts and rarely get paid for working in excess of 40 hours a week when the job actually requires them to be on site 50-60 hours a week.

One of the terrible aspects of the migration regime is that migrant workers are tied to a particular company for the visa. They can’t change companies for a better position. This is a recipe for abuse.
Whilst as a union we do not want to necessarily argue that Immigration NZ shouldn’t tighten up on these companies abilities to use immigrant labour in this way, we do think that it is unfair to penalise those who are already here under the old rules.

We want the government to consider a policy of applying the old rules to migrant workers who are already here on work visas so they can stay long enough to train and be promoted to a managers position and gain permanent residency.

We would also agree with the companies that there appears to be a lack of understanding of the level of skill required of those in “assistant managers” positions at a BK, KFC, or McD’s store who are being turned down for residency applications while those with a “managers” position at a small Subway store are being accepted.

Unite accepts that immigration is a necessary part of the world in which we live. People will move and should have the right to move in the search for a better life. This is as true for NZers going to Australia as it is for Indian and Chinese or Pacific Islanders coming to New Zealand.

In my view migration has enriched New Zealand. Racist anti-immigration politicians like Winston Peters try to encourage fears about migration that have no foundation. Migration strengthens the economy and creates jobs. But when there is unemployment it is easy to point the finger at the newest arrivals and blame them.
Unions should oppose anti-immigrant sentiment and fight for equal rights for anyone who works in New Zealand.

Similarly the government should demand the rights of permanent residence for all New Zealand workers in Australia. It used to be that NZ migrants to Australia got the benefits of permamnent residence on arrival – including welfare benefits and access to education. The same rights applied to Australians moving to New Zealand to work. In 2000 the stand down period of two years was imposed on New Zealanders to acess benefits. Then in 2001 only those who met the Australian requirements for Permanent Residence (skills, character etc) could access welfare and education rights. Most New Zealanders are now being denied PR when they apply. Close to 300,000 Kiwis in Australia are now living in Australia without the equal rights that should be their right. They are in a much worse situation than other legal migrants.

Under all the free trade deals being signed in the world big business can move their money and investments freely. Managers of multinantionals also have the rights to come and go under these agreements.

Ultimately I think we will live in a world where people can travel and work freely – as they can in Europe and to a degree in Australasia.

As a first step in this region we should demand equal rights for migrants in the South Pacific to live and work in Australia and New Zealand. This will also be a small step to make up for the legacy of colonialism and exploitation that was imposed on the island nations of the Pacific by Australia and New Zealand. It would also help redress the injustice inflicted on the many Samoan people stripped of their New Zealand citizenship rights in the 1980s. And Kiwis would have the same rights in Australia as Australian do here.