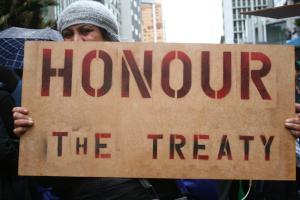 There are two certainties in life: death and taxes. Benjamin Franklin lent fame to the phrase in a letter to French historian Jean-Baptiste Leroy. Franklin claimed that “our new Constitution is now established, and has an appearance that promises permanency; but in this world nothing can be said to be certain, except death and taxes”. New Zealand’s constitution doesn’t promise permanency, but it can be said that the three certainties in our context are death, taxes and Treaty-hysteria.

The establishment of the government’s constitutional review panel has coincided with a rise in Treaty obstruction, falsification and denial. The obstructionist, falsifier and denialist in chief is the New Zealand Centre for Political Research (NZCPR), a “web-based think tank” and home to storied thinkers like Muriel Newman and David Round. Let’s run through a handful of their claims.

Apparently, the Treaty is non-binding. Well, we’re expected to keep to our agreements – governments are no different. The Treaty doesn’t have a time lapse, an out clause or a guarantee that rednecks have the right to make post-facto decisions about its moral and legal force. The Treaty was created, offered and accepted under the assumption that it would bind the Crown and Maori. It’s a basic question of human decency and the rule of law: if men and women are held to their agreements, shouldn’t society and governments be expected to do the same? If anything, society and governments should be held to a far, far higher standard.

I’ve also been told, very matter-of-factly-by-condescending-white-guy, that race can’t be part of a constitution and the Treaty is discriminatory because it awards more rights to Maori. Well, matter-of-fact-condescending-white-guy, the Treaty is already part of the constitution and, therefore, so is race. Race is central to any multicultural society, especially one where the founding document recognises the indigenous race.

On the discrimination point: wake up. We award different rights to different groups all of the time. Think children, women, immigrants, the disabled and the rich. Many rights aren’t universal. Every person has inherent rights, but those rights are defined by race, gender, age and so on. To use the tired phrase, there is nothing more unequal than the equal treatment of unequal people.

The Constitution of Canada provides protection for the “aboriginal and treaty rights” of First Nations people. The Australian government is moving to recognise and affirm the constitutional rights of Aboriginal people. The United Nations Declaration on the Rights of Indigenous People guarantees a suite of inherent and human rights. Inserting the Treaty into a written constitution wouldn’t make New Zealand an outlier, we already are.

The world is moving towards forms of multicultural and bicultural pluralism. India, Singapore and Puerto Rico maintain special representation for ethnic minorities and the indigenous Sami people of Scandinavia enjoy separate Parliaments in Finland, Norway and Sweden. The world is bathing in its diversity and recognizing that justice and harmony demand a degree of self-determination for indigenous people and ethnic minorities. The myth that we are all one people is, well, a myth. The one people argument is a euphemism for assimilation – a justification for maintaining the economic and cultural dominance that matter-of-fact-condescending-white-guy.

The Treaty guards my right to retain my Maoritanga and everything that comes with that: my language, lands and other parts that define me. There is nothing insidious in that. If you think that there is, that says more about you and your values than it does mine.