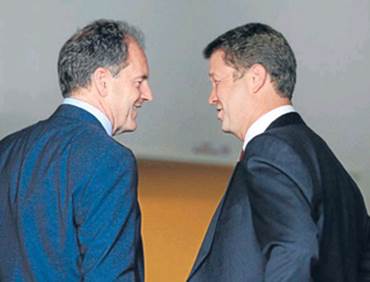 IN ADDITION to being the father of lies and the author of all evil, Lucifer has the added distinction of being the only leader in the history of the world who had no illusions about God being on his side.

But human-beings, unlike Lucifer and his rebel angels, all harbour a deep-seated need to believe that their actions are altogether right and good. It takes a very special, or a very damaged, person to do evil without guilt or remorse. No matter how absurd or self-serving our justifications may sound to others, in our own ears they always ring true.

Politicians are particularly good at convincing themselves that their policies represent the only rational, ethical and effective solutions to the world’s problems.

The Labour politicians who gave New Zealand “Rogernomics”, for example, really did believe that there was no alternative to the neoliberal reforms Treasury had pressed upon them. Indeed, it was a crucial aspect of their success: that absolute conviction that any other course of action would be the purest folly and only make things worse.

So long as they remain broadly aligned with the interests of their party’s electoral base, the holders of such fervently held ideological convictions may be considered a political asset. It is only when a political party finds itself burdened with politicians advocating policies hostile to the interests of a significant number of its core supporters that the trouble begins.

In such circumstances the emergence of factions is almost inevitable. I say ‘almost’ because if a political party is blessed with a leader persuasive enough to convince the overwhelming majority of its members that the policies of her government will generate an economic tide powerful enough to “lift all boats”, then factional tensions can be avoided.

Helen Clark was such a leader. She also had the good fortune to become Prime Minister at a time when a buoyant global economy was lifting all boats.

The defeat of Clark’s government, which coincided with the global financial crisis of 2008, precipitated its own subsidiary crisis within the Labour Party. It threw into sharp relief not only the vexed question of succession, but also the urgent need to find a coherent political response to the deepening economic recession.

Clark’s policy of “glacial incrementalism”: essentially the social-democratisation of New Zealand society at a pace which, being barely noticeable, capitalism would have no difficulty accommodating; was simply not suited to an economic climate in which social divisions were widening rather than closing. Indeed, with the benefit of hindsight, it is clear that Clark’s Fabian strategy was already beginning to fray well before the global crisis broke.

Unless Clark’s nominated successor, Phil Goff, was able to come up with a political programme which offered both a decisive break with Clark’s cautious incrementalism, and a clear alternative to a now discredited neoliberalism, the re-emergence of factions within the Labour Party was only a matter of time.

And so it proved. Deprived of Clark’s leadership skills, and unable to unite behind a new and radical alternative to the prevailing economic orthodoxy, the Labour Party began to fracture. The cracks ran along the stress-lines of personal temperament and political experience as well as ideological conviction.

Veterans of the Fourth Labour Government – Phil Goff, Annette King and Trevor Mallard – unable to unlearn their neoliberal catechism of the 1980s, joined with the more viscerally conservative Labourites – Clayton Cosgrove, Shane Jones, Damien O’Connor and Ross Robertson – to anchor the forces of the Labour Right.

These politicians remain faithfully wedded to what they would no doubt call “the political and economic realities” of governing New Zealanders. Their accumulated experience told them that any attempt to deviate from the norms of New Zealand politics would be met with massive resistance from business, the media, state sector CEOs, elements of the judiciary, and the agencies of national security.

The Labour Right’s fear of these forces is very real, and their determination to protect the party from its own radical instincts perfectly genuine.

Another distinguishing feature of the Labour caucus’s right-wing faction is how very few of them owe their political careers to Helen Clark and the party organisation she so relentlessly dominated for a record fifteen years.

The number of Labour MPs who came into Parliament via the royal road of Clark’s favour adds up to, by my rough calculation, a remarkable fifty percent of the present Labour caucus.

Long before Grant Robertson, Jacinda Ardern and Chris Hipkins deposited their derrieres on the big leather chairs of the House of Representatives, their faces were well known to the inhabitants of the Beehive – yea, even unto its Ninth Floor.

It was in the cautious political culture of the Clark-led Labour Government that the bulk of Labour’s “new intake” learned their trade. Power, for these younger politicians, was born (as it was for their mentor) out of the patient construction of reliable networks. They kept their eyes tightly focused on the internal world of Labour Party politics. Increasingly, the wider world, and the people living in it, acquired a removed and abstract character.

It is by no means certain that Clark’s elevation of Phil Goff to the leadership of the Labour Party was ever intended as anything more than a rather cynical stop-gap measure.

Clark’s preferred successor, Steve Maharey, had very inconveniently taken himself off the political chessboard more than a year out from the 2008 General Election. Some have speculated that Goff may have been deliberately promoted beyond his competence in order to discredit the Labour Right – thereby opening the way for whoever had emerged as the “Clarkist” candidate to seize the leadership and give the party a fighting chance in 2011.

Any one of three Clark protégés could have made such a plan come true: David Cunliffe, David Parker and Grant Robertson. It is certainly true that their names featured in a constant stream of rumours about people “counting heads” in preparation for an imminent coup. The scandal which engulfed Darren Hughes in March-April 2011 apparently came closest to precipitating a leadership spill, but, in the end, none of our budding Brutusses were prepared to strike the blow that would bring their Caesar down.

Labour’s woeful performance in the 2011 election (the worst since 1928) should have set a gravestone upon the Labour Right. Its miraculous survival under the titular leadership of Goff’s hand-picked man, David Shearer, still requires a convincing explanation. How was it that a caucus – fully half of whom owed their parliamentary careers of Clark’s patronage – felt justified in rejecting Clark’s preferred candidate, and the Labour Party’s clear choice, David Cunliffe?

The conventional wisdom has it that Clark’s plans were undone by the serious personality flaws of her candidate.

Few would dispute that Cunliffe possesses an over-sized ego, or that he has very little patience for fools and incompetents. Such faults are, however, common to most successful political leaders and certainly didn’t hinder Cunliffe’s performance as one of Clark’s more successful Cabinet Ministers.

Cunliffe’s failure is better explained by the alliance which so quickly and surprisingly coalesced around the figure of David Shearer: a curious coming together of the Labour Right and a clutch of Clark protégés whose ambitions had finally out-run any lingering sense of obligation they may once have felt to their patroness. Indeed, resentment at being expected to simply fall into line behind the choice of someone who, unlike Goff, wasn’t even a parliamentary player, probably played a greater role in the events of December 2011 than many of the protagonists would care to admit.

The curious amalgam of neo- and social-liberal MPs that keeps Shearer in power is also, I suspect, a product of the less experienced MPs’ understandable gravitation towards the core of power and experience that Shearer’s faction represents.

MPs like Goff and King, and Clark’s old bovver-boy, Trevor Mallard, offer less experienced and ideologically confident members of the Labour caucus a measure of reassurance and comfort. When reinforced by the sheer menace of old-time trade-union shit-kicker, Darien Fenton, and the career-killing venom of Chief Opposition Whip, Hipkins, the sentimental glue binding “Team Shearer” and Robertson’s “Young and Restless”, has (so far) demonstrated an unanticipated political strength.

Capping all, however, is the guilty (if unacknowledged) awareness among the thirty-four members of Labour’s caucus that only Cunliffe (aided by his loyal band of ethnic and ideological “outsiders”) has ventured intellectually beyond the stockade of neoliberal orthodoxy that the party so urgently needs to escape if it is to offer voters anything more than a slightly less vicious version of National’s slow-motion economic austerity.

Subjectively, the Shearer-Robertson alliance undoubtedly sees itself as a responsible collection of political “realists” whose resolute opposition to the “naïve and stupid” ideas of David Cunliffe and his supporters offers the only hope of securing an electoral victory for Labour’s traditional objectives in 2014. Atheist or believer, each in his or her own way will be convinced that God is on their side.

Objectively, however, Shearer-Robertson’s refusal to strike out beyond the safety of neoliberalism’s ideological enclosure marks them as defenders of the status-quo.

And that locates them squarely on the right.

If being left-wing means anything, it means being willing to challenge the existing architecture of power and wealth. It means being willing to take big risks on behalf of those who cannot take such risks themselves. It means aligning oneself unequivocally with the poor and the marginalised, and refashioning the agencies of the state, which this National government is fast turning into weapons of oppression, into the tools of enlightenment and emancipation that Labour has always intended them to be.

If God is on anybody’s side, he’s on the side of those who need him most.

For those who like lists, I have appended my best guess at the composition of the three factions currently dividing the Labour Caucus. Obviously, to become (or remain) leader of the party one must acquire (or retain) the support of at least two of the following:

The Young and The Restless (9)

My sincere apologies to all those MPs whom I have placed in the wrong faction!