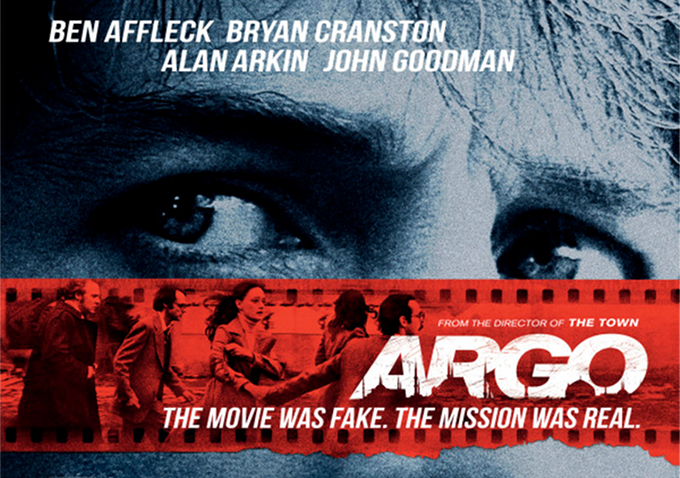 The publicity surrounding Argo takes me back to `the Deerhunter`, a 1978 film about a trio of Russian-American steelworkers from Pennsylvania and their infantry service in Vietnam. In an improbable scene Michael `Mike` Vronsky (Robert De Niro), Steven Pushkov (John Savage) and Nikonar `Nick` Chevotaevich (Christopher Walken) are forced by their Vietcong captors to play Russian roulette. Stephen plays against Mike and loses control of the gun as it discharges. Stephen is then imprisoned in an underwater cage containing rats and the bodies of previously killed US soldiers. Mike and Nick overpower/shoot their captors and rescue Steven. After many escapades Steven and Mike make it back to Clairton, their home town in Pennyslvania. Nick is rescued by helicopter and recuperates in a Saigon military hospital with partial brain damage. In 1975 his friends revisit Saigon and find Nick in a crowded club. In an improbable Russian roulette scenario with Mike, Nick shoots himself fatally. Back in Clairton the funeral service is followed by remiscences at the local bar. As the film ends, Mike toasts in Nick`s honour and everyone sings `God bless America`.

The Deerhunter won five academy awards including best picture, best Director(Michael Cimino) and best supporting actor (Christopher Walken). These accolades validated what Time magazine called the `new patriotism`. Many Americans had been perplexed by a war which had fuelled anti-Americanism abroad and social division at home. In these circumstances Cimino`s film was a cathartic portrayal of human savagery,suffering and courage. Such was the reality of armed conflict. John Wayne style patriotism was out of place. Yet,as John Pilger has noted, such a construction was premised on a lie. Excluded from view was the wars most brutal aspect, the US bombing campaign. Across North Vietnam, Laos and eastern Cambodia thousands upon thousands of civilians were killed or maimed. Landscapes became moonscapes, entire ecosystems were poisoned.

The Deerhunter`s humanist credentials were also a deceit. Film reviewer Pauline Kael wrote `the impression a viewer gets is that if we did some bad things there we did them ruthlessly and impersonally, the Vietcong were cruel and sadistic`.

Well, as it happened, the new patriotism was eventually overshadowed by the Iranian hostage crisis. Valour gave way to humiliation as blindfolded US embassy officials were paraded on screen. The feeling was compounded by the failure of a military rescue mission. Two of the eight aircraft involved crashed, eight American servicemen and one Iranian civilian died.

Argo downplays this debacle with the (relatively) true story of a daring escape involving six American embassy staff and an unorthodox CIA agent named Tony Mendez (Ben Affleck). As the US embassy is seized six staff escape to the Canadian ambassadors residence where they are sheltered, fearful of capture and execution. Meanwhile, Tony Mendez devises an outrageous escape plan with two Hollywood hucksters, film producer Lester Seigel (Alan Arkin) and make up artist John C hambers (John Goodman). As part of the mission the hidden embassy staff would pretend to be a Canadian film crew in Iran, scouting locations for `Argo` a low budget never-to-be-made science fiction epic. Then, with fake Canadian passports they would fly out from the airport under the noses of the Iranian revolutionary guard. However, Mendez is told that his operation has been cancelled to avoid conflict with a planned rescue of the embassy hostages. His superiors are persuaded to reobtain reservations for the escapees` Swiss air flight. At Tehran airport, after a tense confrontation, reservations are confirmed and the plane is boarded at the last minute, just as the revolutionary guards uncover the ruse. They try, unsuccessfully, to stop the plane getting off the runway.

We then get queasy, patriotic schmaltz. Tony reunites with his partner and is secretly decorated for bravery. Justice and the American way prevails. The planned military rescue mission thus becomes a backstory, its tragic failure never raising a mention in the film.

Local concerns about Argo`s mis-representations have been well canvassed. In Affleck`s version of history New Zealand, the United Kingdom and other countries refused to habour the fugitive US officials. Former New Zealand embassy worker Maureen Campbell-White has provided a contrary, first person account. She recalls that when travelling in the Turkoman steppes with colleagues, two American`s were picked up and temporarily hidden in the New Zealand embassy back in Tehran. Furthermore, New Zealand`s then ambassador Chris Beeby and second secretary Richard Sewell secretly provided food and beer for those hiding out with the Canadians. Winston Peter`s outrage at Affleck`s omissions is perfectly understandable. How dare he blacken New Zealand`s unassailable reputation for courage, mateship and hospitality!

We have one consolation though, Argo`s inaccuracies and omissions are enough to offend many other nationalities. My research indicates that the US embassy officials were initially sheltered by the British before the Canadians stepped in. The film`s portrayal of the six Americans in a Tehran bazaar rehearsing their fake identities never happened. The airport confrontation with the Iranian revolutionary guards never happened, Tony Mendez and the six escapees were not questioned or detained. The climactic car chase by armed Iranians pursuing the jetliner lifting the Americans to safety never happened either, they lifted off without a hitch.

Overall, the film belittles Canada`s role in the rescue mission, an observation recently shared by Jimmy Carter, American President at the time. `I was taken aback by its distortion of what happened. Because almost everything that was courageous or innovative was done by Canada not the United States`.

Behind these and other distortions is the really big lie; the misrepresentation of Iranians and of America`s role in their history .

The film started promisingly with vivid cartoon storyboards of the infamous Mossadegh coup of 1953. As indicated, British and American diplomats/intelligence officials helped local conspirators to depose the Iranian Prime Minister before he could nationalise oil reserves. British and American oil interests trumped the principles of national sovereignty and economic democracy. Omitted from the story boards, however, was the US ambassador`s participation in the actual overthrow, the role of US military advisors and the use of assasinations to destabilise Mossadegh`s government.

A subsequent `Argo` storyboard reveals a torture scene as a voiceover recounts the brutality of SAVAK, the Shah`s secret police force. True enough, but one should also note that SAVAK also operated abroad. On European and American campuses Iranian students were spied upon by the compatriots for evidence of anti-Shah behaviour. Opponents of the regime were `disappeared` when they returned home. Domestically, SAVAK was socially pervasive and about as popular as the Stasi in East Germany, hence the vicious reprisals following the Shah`s overthrow.

This contextual observation is absent from Affleck`s film. Depictions of the US embassy seizure and the hostage crisis were extremely misleading. Yes, the hostages were mistreated, their mock executions attesting to this travesty of international law. However,the scenes of Iranian students rejoining shredded embassy documents were never properly explained. They weren`t only trying to build pictures of the missing embassy officials. More fundamentally, the students were looking for evidence of collusion among the CIA,SAVAK and US diplomats and of collusion between US diplomats and certain factions within the new Iranian government. As Robert Fisk has pointed out Iranian suspicions were eventually confirmed, the embassy really was a` nest of spies` and the Shah`s regime really was an instrument of American imperialism.

At this point let me say that I am no friend of Shi`ite fundamentalism, you can put me in the same category as those Iranian leftists who supported the revolution but were suspicious of the clerics. Can I also say that Iranians as a people are appallingly treated by this film. There is no such character of any depth, just storyboard stereotypes – Islamic crazies, robotic propagandists, crowd figures, unnamed execution victims. Those Iranians who opposed the Shah AND the new clerical autocracy are excised from history. For the record, four main left groupings were on the front line – Fedaii, the Mojahedin, Pekyak and the Tudeh party. There were splits, some trusted the new regime initially, others were always suspicious. Many were killed, imprisoned and driven into exile. All of their experiences have been rendered invisible by Hollywood.

Already I can hear people saying `it’s only a film, chill out`. Well this defence doesn`t wash because `Argo` uses documentary style techniques which are suggestive of historical authenticity. The opening voiceover authoritatively recalls important events preceding the revolution. Actual footage of the captured hostages, President Carter and popular anger across the United States lends credibility to Argo`s narrative. And, the end credits present official looking postcripts for the people portrayed by the main actors.

As of now, Argo`s jaundice comports with the American/orientalist stereotype of Iran as a crazed Islamic theocracy intent upon acquiring nuclear weapons. This strengthens fundamentalist elements in Iran and makes conflict involving Iran, Israel and the United States more rather than less likely. In which case there could be another humiliation in store similar to the one that followed `the Deerhunter` back in 1979.