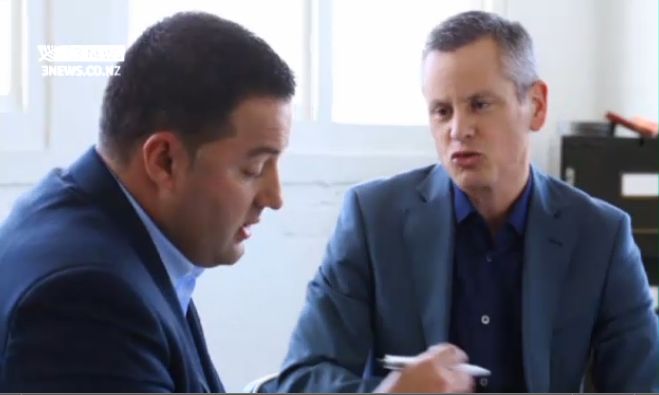 I do like it when Espiner and Garner step up for the underdog and some bloke caught up in prison overseas for a small fine is okay, but I’m looking for a grilling, not a slow boil.

It was a nice touch putting their hands in their own pocket to pay to get him out of prison, but a bit dull. If they really gave a damn, they would have paid it up front rather than drag it out for another week. When you consider the vast chunk of change this show gets from the Taxpayer, such generosity should be expected.

The second story was about a runner. Sports are not current affairs, I switched over to MTV Classics.

Came back for the much hyped third story on Tuhoe becoming a separate nation. The promos for the Tuhoe segment looked like all the worst racist elements of 1970s NZ. The usual montage of flag shooting and yelling was boringly rolled out to arouse redneck anger. Guyon rode around on a horse desperately trying to find something to be angry about. The best part was Chris Finlayson telling NZers who had a problem with any Tuhoe deal to get over themselves.

The interrogation section still seems terribly contrived. It only took Guyon the second question to breathlessly get to allegations of ‘separatism’.

This is boring. Who the hell is producing this? These guys have talent, it still seems thumb twiddling.

With so much going on in NZ, these are the 3 big stories? This show has all the promise of Pundit Blog along with all the disappointment of actually having to read Pundit Blog.

More yawns than burns for episode 3.

Next week is the first of these ‘vote’ shows. I’ve heard some damning things already so ready to sharpen the knives for the next review.