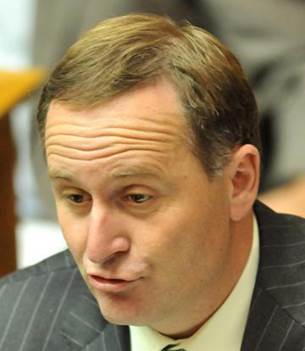 WHAT DOES the National Party think it is doing?

As if allowing Peter Dunne to push his doomed Car-Park Tax to the very brink of reality was not crazy enough, John Key’s government is now contemplating the introduction of a Cell Phone, I-Pad and Tablet Tax.

This is madness on stilts.

Mr Key had better pray that the same unholy alliance which brought down the first efflorescence of Mr Dunne’s fiscal OCD, reconstitutes itself to defeat the second.

In fact, the Prime Minister should immediately pick-up his own, taxpayer-funded I-Pad, and send an urgent text to Exeltium’s Matthew Hooton, the EMA’s Kim Campbell and the Unite union’s Matt McCarten, begging them to “Stop us – before we tax again!”

It’s easy to laugh, but there is a serious side to this sudden outbreak of Tory foot-in-mouth disease.

One has only to cast one’s mind back to the reaction afforded TO Labour’s plans to mandate the use of energy-saving light-bulbs and shower-heads. Even Mr Hooton (who at the time decried them as further evidence of Helengrad’s totalitarian ambitions) will, today, quite happily concede that energy-saving light-bulbs and shower-heads were eminently sensible regulatory innovations.

But that is not the point. As Mike Moore is fond of saying: “You get no reward for being right at the wrong time.”

The trick to political longevity and successful governing lies in recognising those occasions when “doing the right thing” is certain to deliver the wrong result.

Governing human-beings is an art – not a science. Enforcing the dictates of Reason is all very well for an enlightened despot, but it butters very few parsnips for leaders required to face their electorates every few years.

Democratic government is all about timing. Knowing when radical measures, being widely expected, are unlikely to provoke serious political resistance; and when a restive electorate, grown weary of change, is capable of taking offence at the most trivial of political provocations.

Indeed, the more intimately the citizen is affected by change, the more likely he or she is to take serious offence.

When Bill Rowling’s Labour Government banned the family cat from the premises of the local family dairy, the leader of the National Party Opposition, Rob Muldoon knew he was onto a winner. Half New Zealand’s households harbour one or more moggies. Keeping poor puss out of the corner shop was roundly condemned as an example of pettifogging socialist bureaucracy.

Much more damaging to Labour’s re-election chances, however, was Helen Clark’s refusal to allow her caucus colleagues to cast a Conscience Vote on Sue Bradford’s “Anti-Smacking Bill”.

The Labour Prime Minister saw the issue in terms of extending to children exactly the same legal protections against physical assault that Parliament had already given to adults.

In their eyes it represented both an unwarranted intrusion into their most intimate familial space, and an unspoken (but unmistakeable) indictment of their child-rearing strategies. They felt violated and insulted by a childless Labour leader who shared neither their values nor their lifestyle.

It was electoral poison.

That’s why the National-led Government’s inability to stop Peter Dunne from embarrassing it with the sort of pin-pricking, voter infuriating, compliance-costly fiscal measure that maximises public outrage while netting minimal returns to the Treasury, is so puzzling.

Pissing-off National’s core small-to-medium businesses constituency for a measly $17 million (in the case of the now abandoned Car-Park Tax) makes absolutely no sense at all.

One can only speculate that National has reached that point in the life of every government where its familiarity with power is translated into contempt for the very people who gave it to them.

Or as the Ancient Greeks used to say:

“Those whom the Gods seek to destroy – they first make mad.”