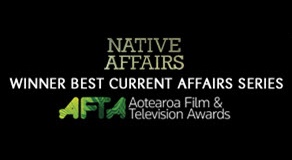 It may be mid-March, but the television season has only just started. We thought the teachers and politicians had it good – they’ve got nothing on network television for long holidays and limited output.
How they get away with squandering talent and opting for over-produced clones ahead of real local innovation is best answered by the executives who make these calls. Whether it is a budget thing or an
ego thing it doesn’t apply to Maori Television however.

One of those making the calls is now Julian Wilcox, the effusive front man and every man across every current affairs show on the network. He is now behind the scenes as head of current affairs and news,
relinquishing his numerous on-air duties. He hosted their flagship programme ‘Native Affairs’; now that returns to Mondays at 8:30 and the job sits with Mihi Forbes.

Her gutsy journalism was revealed in her take down of the capitalist beast, Employers and Manufactures Grand Dragon, Alistair Thompson, where she stood down this glowering, blustering, threatening crimson-flushed oaf in his own cave. Respect. So why did she let David Shearer – the bewildered lamb – get away with his ponderous, dithering non/half-answ…nyea… responses to what were essentially a fluffy
candy floss cloud of patsy questions? Seeing him coaxed gently from pen to pen by Mihi would only have made sense if he was being led to the abattoir and not the shearing shed. Rainbows in the air never has
the same taste or memory as blood on the floor. At most maybe a unicorn farted. Too nice. I’m not sure Julian would have treated it that way. Frightened unicorns impaled on their own horns is where the Shearer picnic begged to wind up.

The first show of the season was good enough to put it at the top of all the competion (20/20 on 2, 3rd Degree on 3, 60 Minutes on Prime and the reduced Sunday programme on TV One), but was it investigative
journalism at it’s best? I think it got the mix for an hour show right, that’s why it was a good watch, but was it as intensive and emotional as the second outing of 3rd Degree? The Police fit-up of a teenager for a crime he couldn’t have commited was compelling, and the confrontation with the Detective responsible was relatively dignified and left a sense of action and a prelude to resolution. The back work of evidence and interviewing the paid witnesses built a solid case for a pardon and was great television. Less satisfactory was the lawyer’s conditional answers to the rehearsed Garner/Espiner interview segment. It’s about 6 seconds long, these jacked up little chats, so it made his equivocation seem even more long winded than they were. What a poor advocate for his client – in jail for 20 years – and his answer to why should he be pardoned isn’t because he’s innocent, it is because a professor from Europe has a theory about why false confessions… And at that point he should have stopped. A terrible communicator. It is because the evidence at the trials was bullshit. The cops fitted him up, and in particularly the ballhead prick who looks like a Penguin. But lawyers have to say it’s all about a professor’s theory to give credibility to it. They should just tell it how it is, especially on a show billed as more macho than Magnum’s mustache.

Native Affairs tells it how it is in a more familial environment than their Pakeha counterparts seem to display, at least that is my impression. Perhaps it is Maori talking to Maori as Maori, rather than Maori being a subject of otherness inside a Pakeha context of Pakeha talking to Pakeha that gives this pleasant and reassuring appearance. It is a different space on Maori Televison, and despite the conventional format of Native Affairs this is apparent.

The first show’s variety kept my interest up until the drought piece. Drought is a tough topic for TV because it’s a lack of something. It’s very much like covering paint drying. And a lot of whinging farmers – and we all heard enough of them in the 80’s to put us off the prospect of any current bleating. Like a quavering Jodi Foster to Anthony Hopkins’ Dr Lector – yes we remember the crying of the farmers, how
they shrieked and moaned for what seemed like an eternity in the long dark nights of Rogernomics. It’s dry, get over it. I tuned out. Before that though, pretty good.

The Tongan ferry story could so easily have fallen back on morbidity and a cheesy Ashika disaster montage, so the pursuit of the NZ foreign aid angle kept my interest. They had us convinced the Tongans were
dependent, shameless bludgers too until we were told the transport aid from Wellington is being spent on the airport used by the wealthy and not a cent on the rickety looking sea ferries the poor must use. Nothing however out of MFAT or McCully. It looked like NZ aid money is really used for consultants reports and subsidising the travel our own tourists. This was a case study of sorts, this is probably happening
all over the Pacific.

Next was an interview with Tame Iti and his missus from what must have been their garage by the looks of it. That or the man lives very modestly. It was Maori TV doing what it does best, Maori talking to
Maori. Without bringing the Pakeha preconceptions a TVNZ interview would of carried, for example, a Maori like Iti – wary and cynical of how his words will be interpreted on Pakeha television – is free to
speak openly without this pressure. What results is his story (and hers) of the police and corrections experience rather than of a relitigation of the supposed ‘terrorism’ at the core of the Urewera 4
show trial. I would liked to have had the camps and the activities put to him, but this was never going to happen. He wouldn’t have agreed and it would not have suited the situation. That said the informality
did yield vivid descriptions of what occured and how they felt going through this persecution. The rapport with the interviewer was obvious and the vibe friendly.

And speaking of friendly, back to Shearer. He was being given a free pass on this one. They even had a camera shot at an angle to make him look dynamic. But dull, grey Shearer couldn’t be dynamic if he was
struck by lightening. She let his hesitating, equivocation go unpunished. Why were the Maori in caucus at the bottom of Shearer’s new reshuffle? He never answered that satisfactorily. The real answer would be the Maoris backed Cunliffe and they’ve been caught up in the collective punishment after his leadership bid failed, but that never came out. What about Labour’s policy of every fifth spot being for Maori – that was not broached either. The Foreshore and Seabed law? Shane Jones? Surely Jones would get a bit more heat, but he could brush it conveniently aside with the assurance the Auditor-General is dealing with it… Yeah, after 9 months, but he got away with it. His inclusion of Mana in the parties he envisages may make up government with Labour is a departure from Goff’s leadership, but again questions as to why the change were left aside.

I’m certain the kid gloves would not have compared to the wallop she’s capable of delivering. She is keeping her powder dry, I hope she uses it.