In the Prime Minister’s post-Cabinet conference earlier last month, John Key reiterated the reasons why any New Zealander who is concerned about the issue of human rights should be concerned about the closer ties with Australia over immigration issues. Positioning his decision to take 150 refugees from Australia as part of the refugee quota of 700 per year, Key indicated that part of the bilateral agreement would be to collaborate on immigration. Signaling that he was not opposed to the possibility of a joint detention centre in the Pacific, or letting Australia determine who were refugees by drawing on their intelligence resources, Key argued there was little political risk in pooling our resources as mates.

The debate over immigration has not reached the same level of intensity or scrutiny as in Australia. Since there has not yet been a boat that has reached New Zealand, Key’s attempts in the past to rustle up support for his immigration policies by alarming the population about the possibility of boat people have been met with a resounding rejection from the media, who have pointed to the implausibility of this scenario.

Yet the calls for closer collaboration with a country that has a dismal human rights record on immigration processing should be subject to much more scrutiny. The notion of processing refugees offshore rather than in Australia began with the Tampa crisis in August 2001, where Australia under the Howard government effectively let a ship of 438 refugees sink despite surveilling their movements. Closer to Christmas Island than to Indonesia, Australia hurriedly rushed through a bill that reiterated Australian sovereignty to determine who landed in their country. The Norwegian liner the MV Tampa came to the rescue, sparking an intense diplomatic standoff between Norway and Australia as Australia denied their obligation under international law. Australia responded by doing a deal with the impoverished nation of Nauru for the refugees to be held there, with New Zealand taking 150 people. Some people were stuck there for years, with 32 remaining four years later. Australia up taking most of the refugees after spending $600,000 per person holding them in detention centres. One of the refugees ended up on Nauru alone, at the astonishing cost of $23,000 per day.

While Labour dismantled the refugee when they got into power, Gillard changed position and signaled her willingness to reopen Nauru as well as looking at detention centres in Malaysia and Indonesia (both countries with poor human rights records), as well as the possibility of redrawing the migration zone as recommended by a special committee into immigration. The Nauru centre opened in September last year, taking on 400 refugees. The stories that are coming out of there are harrowing – two months in, the Nauru government still had this people living in tents rather than permanent housing. There have been acute water shortages, leaving families without water. The conditions and stress of being in limbo have led some refugees to attempt suicide. Nine Iranians have stitched their lips with a total of 20-30 on hunger strikes. Amnesty has said that it will be months before Nauru has the ability to properly process these refugees.

For those who say that off-shore processing centres are an effective means of discouraging boats, the research overwhelmingly concludes that the push factors in the home countries are a more determinant factor over whether people will risk fleeing in a boat, making this Australian tax payer funded ad below in Pakistan more of a waste of money than focusing on effective methods to deal with refugees. It is clear that Australia is also violating international law in their use of offshore facilities, which requires them to deal with refugees humanely and quickly – a fact that led the UN Commissioner for Human Rights Navi Pillay to slam Australia for their human rights record in November last year. The situation does not look to improve, with just last week Australia’s Human Rights Commissioner being denied visitation to assess human rights in Nauru and Manus Island by the Solicitor General.

It is clear that before we cozy up to our Tasman neighbours, we should be asking the same question as many Australian commentators – how brutal do we want to be? 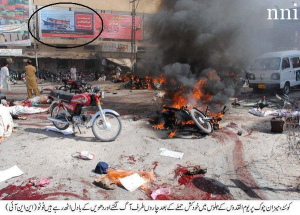