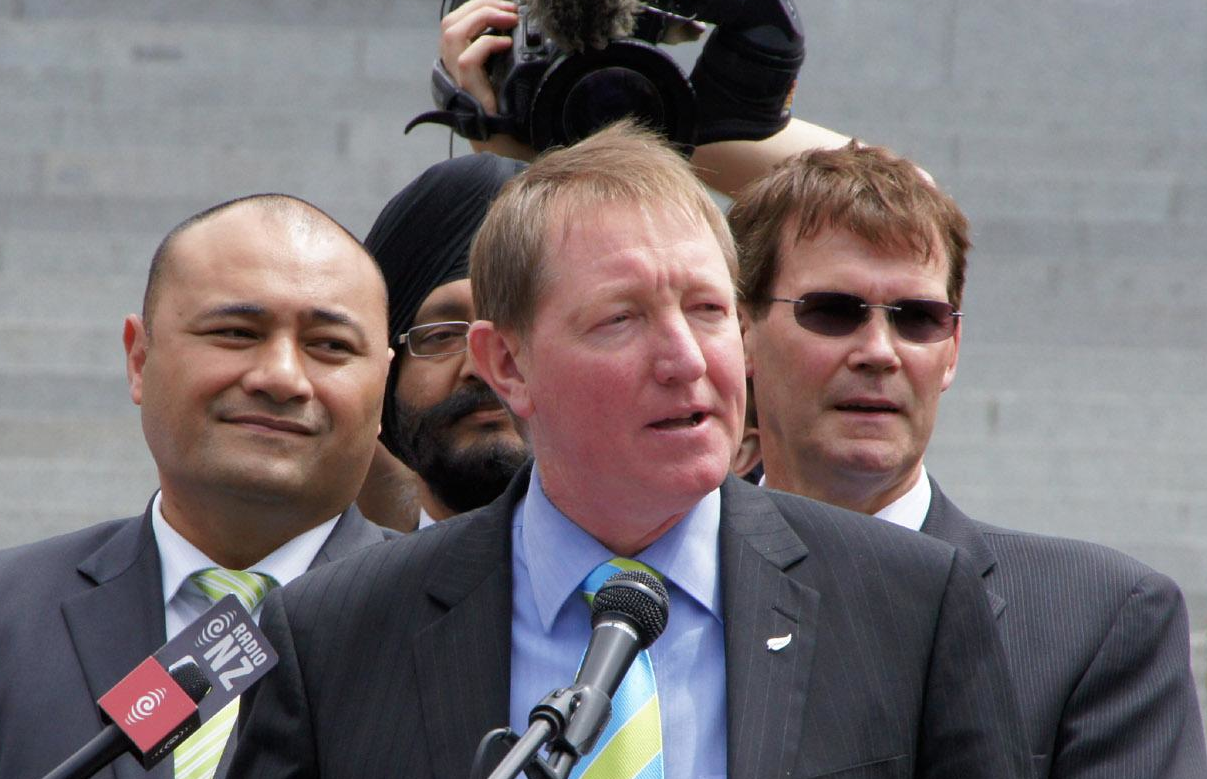 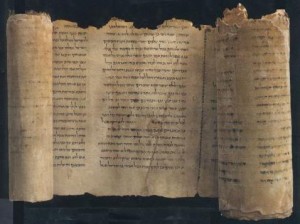 The Prophesy: Woe to you who underestimate a seasoned politician’s ability to climb aboard a problem that’s screaming out for solutions – particularly if the solutions have been identified, tested and ready for a vote-hungry thug to nail his or her name to the cart.

But woe betide the politician who hitches a reputation to a bandwagon that is careering out of control, where solutions remain elusive to her or his political will and outside that politician’s ideological bent.

The Reflection: Thinking back, it was the Spring of 2000. For the Labour-Alliance Government the ‘winter of discontent’ was beginning to thaw and politicians of all casts were hell-bent on getting some good publicity.

In my mind’s eye I can see the Auckland Regional Botanical Gardens. A troupe of politicians has gathered at the entrance. The mood is merry. It’s sunny, late morning. They made the effort to turn up after hearing a ‘photo-op’ was in play (Def: Photo-op – an event akin to when the two Johns lured political hacks to a ‘cup-of-tea’ meeting during an election campaign, where the backstory was just noise and the discussion was, … well private, ‘considered’ unlawful to report.).

The troupe has formed a maul. With the Garden’s behind and a snapper to the fore (Def: Snapper – news photographer) each collectively slips into pure character. There’s a push, not a shove, they juxtaposition themselves in front of a ride-on cart. A “cheers!” sounds out. The flash goes off. The job is done. Satisfied, they head for the Hills, well… Nathan Homestead for some nosh. And one frail but resilient elderly woman remains to tell the photographer what it was all about.

For them, the issue was the opportunity, it was a cracker. For the elderly woman it was about how others of her age, who were more disabled than she, finally had a ride-on cart upon which they too could enjoy Springtime in the gardens.

The elderly woman had been fundraising around Manurewa. She and a few friends sold raffle tickets, knitted little garments for young parents to buy. And it was she who passed on the funds so the cart could be purchased for others of her age, less fortunate than she.

In the photo, for her efforts, she was awarded a proud position on the fringe of the frame. She didn’t share the beaming smiles of her representatives, rather she conveyed a decency and purpose they could only wish for.

The event has served as a reminder for me, to attempt to see through the veil, to understand the motivations that compel a politician to take a stand on an issue, or, for that matter, to turn up to a humble photo-op. 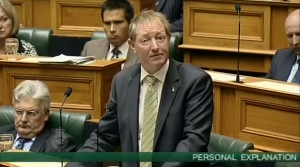 The Politics: Here’s the backstory. The last time we saw the new Minister of Housing, Nick Smith, really perform politically, he was sharing tears with gallery journalists in Parliament’s lobby. He had just revealed that his resignation from Cabinet was necessary because he had let the country, the Prime Minister, and himself down through misusing his ministerial office while becoming embroiled in the Bronwyn Pullar/ACC fiasco.

Back in March 2012, Nick Smith said one of the difficulties of being a minister was that “you have a lot of friends that put you under a lot of pressure to get things that they may wish”. (Ref: 3News.co.nz.) Logic suggests the inverse is also true that a Minister has a lot of friends who put them under a lot of pressure to not do things they do not wish for. In reporting politics, it is clear, the revelation includes friends of the party, supporters, stakeholder groups, donors – they provide the loot a political party needs to fight campaigns.

Here’s the context. At this time in the electoral term, National needs to keep its stakeholders close. The party apparatchiks became dispirited late in 2012 after traditional donors like manufacturers and exporters were refusing to commit donor funds to National’s future fighting fund. The apparatchiks became spooked, reflected on how in 2005 Labour’s donors also began to estrange themselves from their fund managers (in Labour’s case it applied a political electorate tax on its Mps drawing $5000+ from each to help top up its coffers before they ran dry).

Late in 2012, National’s party boys informed its stable of Mps each electorate would need to cough up $30,000 a piece to help it balance its books and provide a buffer for the 2014 fighting fund. It’s the old adage in play, you need to have money to acquire money. Mps were miffed, the country’s future prime minister Judith Collins was apparently privately outraged – understandable in that Papakura is hardly the most thriving community, hard to solicit funds from even if it does amazingly well with a socio-economically and ethnically diverse community. (If you want to see where town meets country and how wide the poor and wealth ditch can span, visit Papakura.) 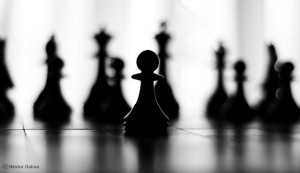 The Gambit: So what’s this all got to do with Nick Smith’s bold chess move against Auckland and its mayor?

For Nick Smith it’s all about the housing market, finding a cart to nail one’s name to, creating a fabulous opportunity to be seen to be doing something about a market that’s too hot for the average punter to touch.

But Nick Smith’s test is to identify solutions and to drive them to a satisfactory conclusion. But as we all know up in these parts, nailing solutions in a city like Auckland can become as elusive as a ghost at a Fabian gig. More so for a National politician, from Nelson, whose politics has been honed within the theatrical halls of Parliament, whose Wellington-styled remedy has no pragmatic element, nor a means to test its effect.

On Tuesday, in Wellington, on the debating chamber floor, Nick Smith stood to deliver what was a cheap party political jab at Auckland’s Council and mayor. It was in response to questions from Labour’s spokesperson for Auckland issues Phil Twyford, who alluded that Smith was unwise to bowl up to Auckland, announce he was going to fix its problems, and that its elected mayor was short of the mark.

A wise politician would say, it would have been wise for Nick Smith to ensure his own house was in order before striding northward. But Smith has a political point to prove, he’s been sitting on his governance hands for 12 months, and he’s determined to impress upon supporters and foes he’s a man on a mission and Auckland is his cart. 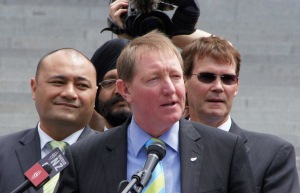 The Problem: Auckland’s problem is multitiered. First the cost of living in the supercity is forever increasing. The cost of housing in the city and the central suburbs are hiking forever upwards. It creates a poverty trap for many who cannot afford the rent, the real estate boom has pushed affordable housing out of reach of thousands wanting to buy, and for those sustaining a mortgage they are faced with ever increasing rates hikes as the supercity adjusts to the National-led Government’s requirement that the Council moves entirely to a capital valuation rates assessment (some face up to 100 percent rates increases over the next three years).

Smith’s problem is that ideology restrains his ability to pragmatically deliver solutions to Auckland’s housing challenges. He’s imprisoned by his free market dogma, while his ideological purity is compromised by a need to intervene through broadening the geographical borders of supply.

In Auckland, solutions to the housing market problems require a practical response. But Smith’s problem is he cannot ideologically agree to require land be released that is locked up in the hands of land-bankers, including thousands of exploiters who live abroad, who have bought land for nix, are sitting on it with the expectation of cashing in once the market-value climbs to giddying heights.

Beyond the ideological constraints, Smith cannot resolve this problem because land bankers and developers are traditional supporters of the National Party, as stakeholders they are “friends that put you under a lot of pressure to get things that they may wish”.

The Green Party rightfully identified how offshore investors were among the problematic land-bankers. Its solution on this point was to regulate to rid and protect New Zealand, Auckland, from overseas exploitation. The Government, and United Future leader Peter Dunne, disagreed. They insisted this part-driver of Auckland’s problem remain unchallenged, that regulation they say would be unwise, that it would spook foreign investers, and that the Green Party’s solution was xenophobic, racist, and anti-Chinese.

Another contributor to the housing problem is the ease and availability of credit. The banks know that under current centralised policy sets Auckland’s land and house values will continue to climb. The debt to equity ratios they apply to lenders appear unchallenged by those root causes underlying the global economic crisis experience. But the National-led Government’s hands off the Reserve Bank approach, its belief that the market will sort it all out, intensifies the negative whirlpool effect exacerbating the availability of land-banking credit. The challenge for the left is how to control the availability of credit while not gentrifying the city beyond the reach of people who deserve to aspire to home ownership. On this point, Labour’s burgeoning affordable homes policy is clearly challenging the orthodoxy of National’s free market rules approach.

As mentioned above, Nick Smith’s solution is to relax Auckland’s MUL containment policy, which currently favors developing Auckland within the MUL limits, building upward in the inner/central city environs, and unlocking greenfield land in the south and nor-western sectors for residential and industrial development.

Smith’s solution is worthy of further analysis. It avoids how Auckland’s containment policy intensifies demand within a region where supply is limited. It interlocks with the National-led Government’s want for more road and highway infrastructure, for the tar seal and property development to sprawl northward beyond Warkworth through the Dome Valley, to satisfy its freight stakeholder groups, and to provide a population base within commuter reach of the bold new vision for a new retail and industrial town to be developed on the western side of Ruakaka’s beautiful coast – to create a ‘where Auckland meets Whangarei’ culture.

For now, Smith is keeping all that under his sleeve. His solution is simplistic in the extreme. It does nothing to resolve the multitiered compounding causes of Auckland’s heated housing market.

For Smith that need not matter. He has found his cart and he’s going to ride in it. Auckland is his test. From Wellington he turned on his northern opponents, he set that eye on his quest, he’s confident his turn of phrase, his eloquence with words, his argument will tame us.

From his juxtaposition, his motivations are different but they need not overwhelm ours. He offers us a chalice, he lures us with promises of economic progress. He assures all that the spoils of wealth accumulated by land-bankers and developers will trickle down through jobs and via legalised resale avoidance. The future is ours to embrace, too, if only we Aucklanders can see it as he does.

But here’s a cautionary note for Nick Smith: he too should never underestimate how a politician, even one as sure footed as himself, can come unstuck when political ambition falls into alignment with a sense of entitlement and an emotive desire to reassert the righteousness of his second coming.

For us, we know. We have looked inside this minister, the Bronwyn Pullar fiasco provided us all a window through which we observed a man’s frailties, and how the once confident was reduced to tears on realising his own expression of folly.

Prophecy often fails, so this question remains, will history repeat?