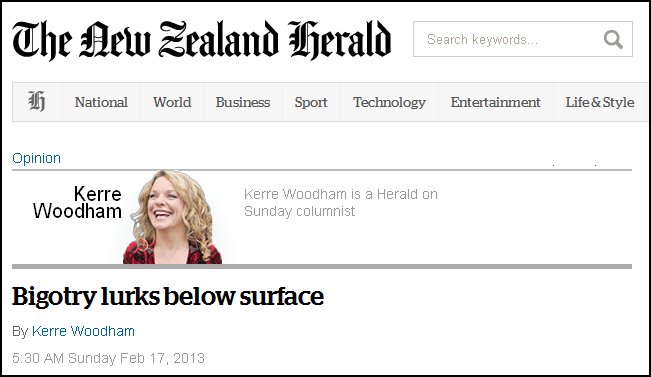 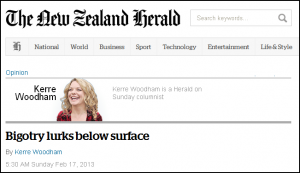 “Investigate” is a right wing/”Christian”/pro-gun/climate-change-denying/anti-Labour rag that goes where no intellgent media cares to go. In short, a perfect vehicle for the likes of the Richard Prossers of the world.

Woodham, a talkback radio host on Newstalk ZB, expressed her views forthrightly on her nightly talkback slot. To her surprise and mine, she wrote,

“But the first three or four callers out of the blocks all thought Prosser had a point and came up with the same sort of ignorant generalisations. All male Muslims marry 10-year-old girls. They all wish the West harm. They stone women to death. They. They. (Source – NZHerald.co.nz).

As if all 1.6 billion people have exactly the same beliefs, values and attitudes.

It was incredible. I had no idea people really thought like that – yet they walk among us.”

I’m somewhat surprised that she has only just discovered the feral nature of so many talkback callers?! The fact that anonymity protects these callers only emboldens their unsophisticated, bigoted worldview.

Once upon a time, bigots would express their rants only in smoke-filled tearooms up and down the country’s factories or the old-style booze-barns, where alcohol disconnected their last remaining brain-cells, whilst at the same time lubricating their tongues into uncontrolled warp-drive.

Not any more. Since commercial radio hit our shores, bigots have been provided with a ready-made podium that reaches across the country, and in their mad rantings, validate each others’ crazy beliefs. Much like Fox has it’s own viewers in the US.

So it kind of staggers me that she’s only just realised this? Extraordinary.

One can only assume that Kerre mentally ‘zoned out’ (as I do when ads are on television) during her caller’s rants, and only returns her attention when they stop to draw breath. Or their caregivers are urging them to take their meds.

Worse still, even some radio hosts contribute to this swirling sewer of prejudice. I think we all know who I’m referring to.

Regarding Prosser. He’s a distraction.

And I really can’t be arsed writing any more about him any further.

Radio NZ – How helpful is the NBR really trying to be? 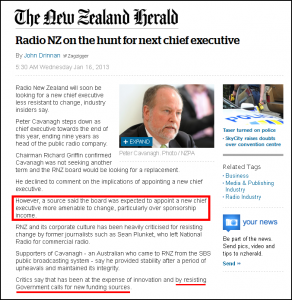 The National Business Review (NBR) published a piece on alternative funding, written by Peter Griffin on our last remaining non-commercial public broadcaster, Radio NZ (see: The NPR model and what may be in store for Radio NZ).

Martyn Bradbury has dissected and deconstructed most of the Griffin’s op-ed here: Why the NBR are wrong about Radio NZ.

Essentially, Peter Griffin’s piece boils down to shifting funding from the State, to private donations – a form of quasi-privatisation. It is typical neo-liberal, Libertarian bullshit to further “remove the State from our lives”. (Ignoring the fact that many/most of us actualy like having the State providing certain services.)

That’s what it usually always boils down to; tax cuts. More money for the One Percenters, and for Middle Class aspirationists (aka, The Terminally Deluded).

It’s a money thing for people like Griffin and other Friedmanite Fellow-travellers.

It’s hardly ever a value thing.

Oscar Wilde once said, “What is a cynic? A man who knows the price of everything and the value of nothing.” That observation describes neo-liberals to perfection.

Well, bugger me. 14 cents a week, per each New Zealander?!

It occurs to me that for 14 cents a week, we’re getting a pretty damned good service for our money.

Jeez, most of us probably have that stuck down the backs of our sofas!

If 14 cents a week is what troubles Mr Griffin, then I seriously question his priorities. In fact, if I sent Mr Griffin a cheque, for 14 cents, every week, I doubt he’d take the time and effort to go down to the bank and deposit them into his account. But who knows – maybe he needs the cash? Especially since he’s currently on some junket study in the “US on a Fulbright-Harkness Fellowship to study innovation in media”.

I suspect “innovation in media” is a crude code for further commercialisation and lessensing of state involvement in media matters.

What is deeply troubling is that National has a not-so-secret agenda to commercialise Radio NZ.

Radio NZ has the biggest viewing audience in the country. But it doesn’t feature in radio ratings because it has no advertising and thus no revenue. Commercially-speaking, it is ‘invisible’.

The barbarians at the gate, National, want to change this. They want Radio NZ monetised, mongrelised, and earning bucks so the Nats can balance their books and probably cut taxes again and again and… (See previous blogpost: NZ media; the Good, the Bad, and the Very, Very, Ugly.)

In return we get a dumbed down State radio. Like TVNZ. Imagine ‘Seven Sharp’ on Radio NZ, instead of ‘Checkpoint’. The rumbling you just heard was my stomach turning.

Which is why Peter Cavanagh is being “encouraged to move on” at the end of this year.

Radio NZ on the hunt for next chief executive. (Full Story)

Make no mistake. This is the current agenda.

As Jonathan Coleman revealed in 2010,

Broadcasting Minister Jonathan Coleman says he has not threatened Radio New Zealand board members with removal, but has made his expectations for their performance clear.

Documents released under the Official Information Act to One News show that Dr Coleman has told Radio NZ not to expect any new funding for the foreseeable future.

Radio NZ costs about $38 million a year to run, but the Government is demanding a shake-up to counter rising costs.

In meeting notes from last November, Dr Coleman was advised that replacing the board was an option if they could not find a solution.

“A defensive approach to wait out for the next year or two in the expectation that it will again be business as usual is not an option.

“Members of boards who are not able or prepared to meet these expectations might need to move on or be replaced by members who can.”

Dr Coleman wrote to board chairwoman Christine Grice at the start of the month asking for a list of the options being considered.

“We have to be prepared for an environment where there may be no new funding available for a number of years,” the letter said.

“This may require a change of mindset on the part of the board and senior management, one that embraces open-minded consideration of alternative revenue models, as well as a thorough examination of options for reconfiguring services.”

This morning, Mr Coleman told Radio New Zealand’s Morning Report programme board members were aware they had no option but to deliver cost-saving measures like other Government-funded organisations.

“What I have said to the chair (Christine Grice) is that there is a significant challenge here and I do need reassurance that you feel you have the right personnel on the board, and that you personally are up for the challenge,” he said.

And thus, the National Business Review’s funding suggestions are indeed helpful – to their neo-liberal masters.

The attack on Radio NZ – our last public, non-commercial broadcaster – takes on new and disturbing dimension. It takes Dumber and Dumber to it’s final conclusion.

An Open Message To a New Incoming Government

This has to end.

No, I don’t mean outlawing National (tempting… tempting…) as an anti-social gang. I mean that it is time that a new centre-left government took measures to protect the assets that we, as a nation and people, have built up over the years and decades.

National governments come and go every three years – but the damage they do to our state assets and services can have on-going, lasting effects that lock-in negative consequences, for the foreseeable future.

As Geoff Bertram stated on 13 February, when he addressed an anti-asset sales rally in Wellington. 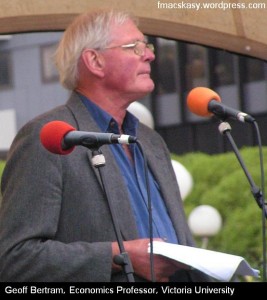 “Here’s the problem. Electricity was once an essential service provided to households at the lowest price, consistent with covering the industry’s costs.

Since 1986 the sector has been corporatised and part-privatised, and it’s pricing has been driven by the quest for profit by giant companies that have the market power to gouge their consumers.

As the owner of three of those companies, the New Zealand government has therefore become a predator. And now the Treasury wants to cash in on that rort by selling out half the government’s stake.

What that means in terms of the options for the future, for government to turn around and come back from the predator model, and return to a social service approach for energy supply, is being closed off.”

If neo-liberal governments can take action to close off future policy changes which could potentially return State services to “a social service approach” – then surely it is not beyond the wit and means of centre-left governments to do likewise. But in the opposite direction.

It is incumbent on the next centre-left government that it must look at ways and means to entrench and protect our state assets. Whether those assets be roads, hospitals, an airline, power companies – or a non-commercial broadcaster – it is time that the potential for market-based “reforms” is closed off – once and for all.

Is it possible to entrench legislation?

(a) is passed by a majority of 75% of all the members of the House of Representatives; or

If the Parliamentary term can be entrenched for three years, requiring either “a majority of 75% of all the members of the House of Representatives… or… by a majority of the valid votes cast at a poll” – then surely we can use the same mechanism to lock-in and safe-guard public ownership of our remaining state assets.

That should include Radio NZ and an accompanying legal charter guaranteeing its funding and non-commercial structure.

How does one protect and guarantee funding for a particularly vulnerable entity such as Radio NZ?

There is one mechanism already in place, and which has been operating at arms-length from success governments since 1977; the Remuneration Authority (see: State Services Commission – Remunerations Authority).

The Authority’s role, as outlined on the SSC website,

We have the tools, we can re-build it…

It should be a simple matter to amend legislation to insert the following,

The Authority also determines the fees for the appointees, and operating-budget increases in line with ministerial salaries, to Independent Crown Entity boards.

Those are two suggestions.

No doubt a Labour (or Green)-led Coalition government has far more intellectual/institutional fire-power at its disposal to dream up ways and means to protect future funding for crucial state-owned entities such as Radio NZ.

This should be a top priority, along with addressing child poverty and unemployment in this country.

Otherwise, this term we lose 49% of Solid Energy, Meridian, Genesis, Mighty River Power, and further sell-down of Air New Zealand. And when the Middle Classes get another rush of blood to their heads and re-elect the Nats again (say, 2020 or 2023), they’ll sell the rest. And then sell 49% of TVNZ. And six years later sell the remaining 51%…

It’s a cut to our state companies and services by gradual degree. Until there is nothing left. And power prices end up soaring so most low-income neighbourhoods are in darkness and our state hospitals are over-flowing with the sick, as infectious diseases run rampant.

And Radio NZ sounds like ‘The Rock’ or ‘The Edge’.

A new centre-left government must make this a priority.

There is no alternative.